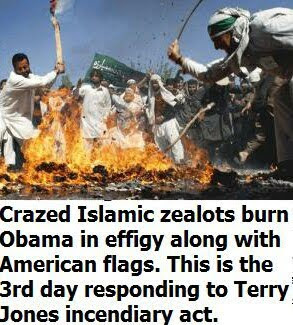 It is astounding that just when you think the IQ estimate of certain pastors can’t get much lower, they surprise you with cocklemamey horse manure that discloses them to be even dumber than you thought with IQs maybe in the bottom 2%. His latest codswallop is directed at all “atheists, cowards and other girly men” who refuse to condemn Islamic extremists for assorted instances of butchery and mayhem. (He posted on his blog about fifty images of beheadings, people set on fire and other gruesome depictions intended to arouse emotions).

He eggs us on by repetitious use of the word “coward” (typical of many bullies) to condemn these acts, as if it takes a genius to do so, or at least one with more moral fiber than he demonstrates (up to now this punk, or coward – by his parlance- hasn’t said ONE word about the previously posted image of Michaela Petit’s burned out bed, see, e.g.

http://brane-space.blogspot.com/2011/03/answer-from-cruel-pastor-innocent-are.html
and why his god didn’t act to spare her being tortured, raped and burned alive!) But what can you expect of loud mouth punks and Christianoid bullies who know how to dish it out but can’t take it.

But anyway let’s get a perspective here. As atheists, we reject ALL religions especially those that deify personal gods (that are actually confected in humanity’s own image). We hold special contempt for the fundamentalist brand of ALL these religions, whether those be fundamentalist Christianity, fundamentalist Islam or fundamentalist Judaism (See also, the excellent documentary “God’s Warriors” which showed how ALL of these are deranged). And yes, on this basis we condemn ALL their obscene, vicious acts whether these be beheadings of Christians by fanatic Islamics, or the butchering of doctors and obstetricians by crazed Christian fundie fanatics.

So what’s the big deal? Does it really require our (atheists, non-believers) spelling it all out, or responding to a fanatic blogger (who hardly ever responds to our challenges, such as validating the inaction of his god over Michaela Petit, or taking a simple test on order-disorder)to demonstrate our consistency and moral probity? Well, to dummies, it seems that way!

But in earlier blogs from several years ago, I noted the book ‘The Lucifer Effect’ by Michael Bloom, and how Islam is singled out for its harsh memes, by which it is spread via conquering and subduing the “infidel”. Bloom therein cites numerous passages showing that at root Islam as portrayed in the Qu’uran is not predicated on peace but rather aggressive conquest and proselytization. But, the Christians can take no consolation given their own “good Book” quotes their spiritual leader as saying he “has come to bring not peace, but a sword” then referring to dividing mothers from daughters, sons from fathers and so on. In the end, the Christians, like the Islamics, have their own proselytizing dynamic.

No, they don’t behead those who won’t convert, but they DO use psychological terror, threatening those unwilling to do their bidding (submit to their witnessing) with “Hell”- never mind it’s an imaginary realm – but the gullible will be affected. Also, in previous blogs, I noted youngsters that had to be hospitalized because of absorbing this witness-induced Hell fear, rendering them near catatonics. SO which is worse, brutalizing the body, or the mind via terror tactics? They are, in the end, both despicable in equal proportions.

Lastly, it shouldn’t be necessary to explain this to a halfway intelligent person, but it seems one must: merely because we hold extremist “Christians” like Terry Jones to opprobrium for their acts doesn’t mean we don’t hold extremist Muslims to opprobrium for THEIR acts. It also doesn’t mean we favor Muslims over Christians, or Jews. We focus on Jones, however, because as Gen. David Petraeus recently noted, his dastardly act seriously compromised the U.S. effort in Afghanistan – specifically the upcoming spring offensive.

In this respect, Jones’ decision to burn a Muslim Holy Book (never mind it has many injunctions to conquest of the infidel) goes beyond his personal beliefs or those of fellow faithers, but also affects the conduct of a key military campaign. In this sense, only a moral idiot wouldn’t recognize the effect his burning would have on operations in that theater. Thus, the key element to recognize is not the burning per se, but the burning in context, and the putative impact on the lives of thousands of U.S. soldiers.

But what’s the use? Explaining and re-explaining these nuances never sinks into this dolt’s head, any more than explaining why his blathering about his beliefs is as zany and bigoted as Jones. So, he has a hatred of Muslims, so what’s new? He also has made it clear he hates: atheists, secularists, Eckists, JWs, Mormons, Catechists, Catholics, Fake Evangelicals, and any others with whom he disagrees about the ‘the Truth”.

We simply want him to understand, that we as atheists have no brook with ANY personalized god religions, and favor none of them over any others. The notion that we somehow accept Islam over Christianity is as daft, incoherent and absurd as his previous claim that because I wrote one blog on Buddhism I am a Buddhist. But this is the type of trite level of intellectual capacity and thought one encounters when dealing with a semi-educated person.

For that reason, I will be picking and choosing which of his voluminous nonsense to respond to, if any, in the future. It simply amounts to a waste of time to debate overly long with a guy who can’t even take a basic test on either logic, evolution or statistical mechanics and pass any of them. Or even respond as to why his persnickety god won’t deign to help an 11- year old child being savagely brutalized then burned alive in Cheshire CT. Yet this demagoguing dimwit has the chutzpah to call us cowards!
Posted by Copernicus at 8:29 AM