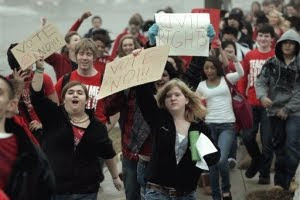 The column in 'The Sunday Denver Post' by State Treasurer Walker Stapleton had to have nearly made every Coloradan spill his or her coffee. The state officially has an unfunded public pension liability of $25 billion. Currently, by the numbers, this translates to $15,000 from every Colorado taxpayer. This while the state itself is in deficit by nearly $1 billion(largely thanks to the ill-conceived TABOR law which always caps allowed funding by limiting it to population increase plus economic growth rate, with the rest returned each year to taxpayers)

Nor are taxpayers off the hook for this money! As Stapleton write:

“PERA is not structurally sound, and Coloradans are on the hook should the system fail”

He explains that either public pension members must “contribute to the state's pension plan at a considerably higher level or the state must step in as the ultimate guarantor of market returns”, Because the state, under Colorado law, is the ultimate guarantor of returns, it means state taxes would have to be increased on Colorado taxpayers to make up the difference. In this sense, a state tax rate of 7% or more is quite conceivable.

How did we even come to this sorry condition? Largely investment hubris and over-extension accompanied by foolish confidence in the markets! The State Public Pension Plan (PERA) basically bet the farm that the stock market would see real annualized returns of 8% indefinitely, and so the size of public pensions was based on 8% increases annually over thirty years, a totally pie-eyed proposition! Indeed, no private source or investment group (except maybe risky hedge funds) will make a guarantee of even 7% a year, and 6.5% is even more likely.

As I pointed out in early blogs even those rates are suspect given that the S&P 500 has been essentially at a standstill (about 1.5%) gain the past eleven years. This is why those people who kept money in money market accounts and CDs largely did better than those with money in stocks, who also successively lost their gains in the major corrections of 2001, and 2003, and the recession of 2007-08. Most people hit with those losses are still trying to make them up and that includes public pension plans which foolishly over-extended themselves (in 2007) in the risky derivatives that were implicated in the sub-prime mortgage collapse. Pension plans around the world lost in the recession and credit freeze and are still trying to make up losses.

“Our state's pension system has guaranteed a result for its members, but it has done so by assuming rates of return that are well in excess of realistic returns. That's like setting your household budget and monthly obligations based on your boss giving you a 10 percent raise. When the raise comes in at 2 percent, that's a problem”

Indeed, because your spending and budget is predicated on a much higher income than you are actually getting. Wilshire Associates, a national expert in public pension plans, just released a study in which it reviewed more than 125 plans across the country and it found that none of them will achieve an 8 percent average return over the next 10 years. This stuff isn’t special relativity! I mean we’ve only just come out of recession, commodities (especially oil prices) are spiking, and the much higher cost in fuel and food are going to curb consumer spending – the main engine of stock market growth.

Nor is this going to change for the better anytime soon, as the populations of India and China make their demands on oil resources and food, further diminishing supply while raising demand. A recipe for indefinitely higher commodities prices and lower consumption, especially as wage increases are static or reduced by inflation the Fed can’t see.

So, what’s the solution for all future pension plans? It seems to be that they ought to be pegged to realistic consistent practical returns, as is done for public workers in nations like Barbados. There, no stock market investment enters, the money is kept in safe bonds (NOT bond funds) and the rates of return are pegged to the bond return minus a small amount for administrative expenses and management. In effect, greed never rears its ugly head and public workers are thankful for what they get, even $500 a month. (Which by the way, is also taxed if the worker has moved out of country, and we’re talking about a tax rate of over 20%!)

In this way, public pension plans won’t be caught in the same sort of greed trap that led ensnared Bernie Madoff’s victims: believing seriously that their investments were 100% safe and sound though making impossibly high returns that no comparative ones made. People, at the mercy of their brain delusions, tend to bet they’re exceptional in their investment skills – and they can’t be wrong. Both the Madoff scandal and the collapse of public pension plans ought to have finally convinced them to be more sober in outlook!
Posted by Copernicus at 8:17 AM