Shocks and Surprises in Genealogy 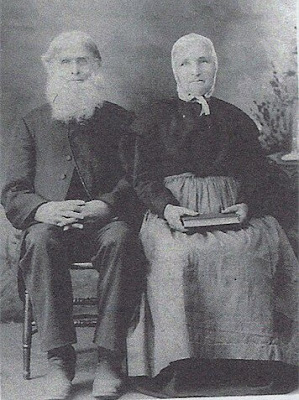 After viewing the NBC series 'Who Do You Think You Are?' it was natural to go back to the well -known genealogical site, ancestry.com and do further digging into my family's background. What my wife and I turned up in the past year or so has been nothing short of astounding, but I must admit we wouldn't have made anywhere near this progress on our own. We have to thank my Uncle in Arizona (dad's brother) and also several other families on the site whose own family branches link with mine.

The discoveries we've made so far would fill most of a small library and we haven't even finished! This being the case, I will only mention one that struck me between the eyes: the discovery of a powerful evangelical Bible puncher (originally one of the group called "the Brethren") back in 1860s Kansas. This turned out to be (after numerous confirmations, both with other families and my uncle) none other than my great great grandfather (born May 12, 1812 in Rockingham County, Virginia) on my dad's father's wife's side. (They're the parents of my great grandmother's mother). Their image is shown in the accompanying ca. 1867 photo.

Why is this so astounding? Because an answer may now be possible to those who ask me: "How in the hell could you and your pastor brother have come from the same womb?" Well, an atheist and a rabid evangelical, you wouldn't necessarily expect that....but why not? After all many families have both liberals and coservatives in the clan and it's but a small step to extend this to religious liberalism (of which atheism is the most extreme example) and religious evangelical conservatism.

And as we know, the authors of the book Nature's Thumbprint have made quite an argument for the case that not only can physical factors be inherited, but also psychological, and personality. Who knows, there may even be more conservative family members who are yet to fall out of the family tree! In any case, it's interesting to speculate that these hyper religious genes may well have been at work for some time, just waiting for the right person or incarnation to pop back out again!

This also perhaps shows there might be a basis for greater tolerance. If as it seems likely, genes are what carry religious dispositions, tendencies and there's no getting around them or trying to force the issue (say by mandating "conversion") then maybe the best policy after all is simply to accept each other's positions and philosophies for what they are. (Which means accepting the religious or areligious personality for what it is, minus unproductive and judgmental opprobrium). Or at least accept the person holding them is a genuine person of good faith, and not a "devil".
Posted by Copernicus at 9:17 AM