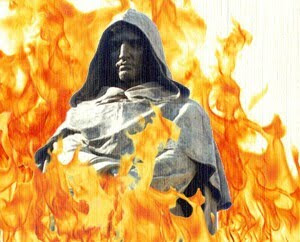 Giordano Bruno: A mob driven into frenzy by its religious beliefs burned him at the stake for daring to suggest there may be other planets with advanced, sentient life forms.

As I was paging through a recent issue of SKEPTIC magazine(Vol. 15, No. 2, 2009), a particular article by Robert Kurtzban and Peter Descioloi caught my attention. The article, entitled ‘Why Religions Turn Oppressive’, explores how and why religions (at least most) turn fascist, based on evolutionary psychology.

The piece begins by recounting the disgusting assault and murder of an astronomer and mathematician – Hypatia- in Alexandria ca. 415 A.D. by a Christian mob led by one “Saint” Cyril of Alexandria. As the authors note:

“She was murdered because some of her ideas differed from the beliefs of her Christian attackers”.

They add that Cyril evidently went after any dissonant people, whether “pagans, Jews or heretics. But, of course, at that time – all these dissenters were known collectively as “atheists”. In that era an “atheist” didn’t mean one who disbelieved in a God, period, but anyone who didn’t adhere to orthodox Christian doctrine. For example, taken back in time, “Pastor” Mike would be considered an atheist by Cyril or Tertullian and likely meet the same fate of Hypatia. Obviously, the Catholic religion was the only one back then and the Pope was its leader. By not accepting the primacy or authority of the Pope one de facto became an “atheist” – whether one otherwise believed in God or not.

Now, fast forward to another incident ca. 1000 A.D. in Rome, when another mob of Christians, now led by Cardinal Bellarmine, set upon a hapless intellectual – stripped him naked, tied him to a stake and burned him to a crisp. This was the philosopher Giordano Bruno who had the audacity to write that there could exist other worlds on which other beings exist – like humans, or more advanced. This sort of heresy couldn’t be tolerated since any good do-be believer knew in his heart of hearts that God made only ONE world, starting with Adam and Eve. There weren't millions of others starting with K'tor and D'evra, or any other combos!

After summarizing this horrific slaying the authors point out (ibid.):

“Religious organizations don’t simply offer ideas about the origin of the universe, the meaning of life and the inclinations of make-believe otherworldy beings (like “demons”). Religions are very concerned with people’s thoughts and behavior, seeking to impose control not only on their own member, but on non-members. The long gruesome history of persecutions for heresy and blasphemy attests to this concern”.

This is an excellent point, and bears asking the question:

If a given religion believes it has perfection unto itself and this perfection is manifestly demonstrable, then WHY the need to rail against outsiders who may not hold those beliefs?

I have never been able to process this. A religion which is convinced of its perfection and that it has an absolute hold on “the Truth”, should have no need to flail and rail against “blasphemers” (a bogus charge if ever there was one) or persecute other ideas, beliefs, even embodied in fantasy presentations.

For example, several years ago the films ‘The DaVinci Code’ and ‘The Golden Compass’ came out – which I saw. At the time, various affiliates of the Vatican and Roman Catholic Church went ballistic just as they did some twenty years earlier when ‘The Last Temptation of Christ’ came out. But why this insipid need to thwart, or fight or constrain the choice of free people with their own minds, to see this fare?

But their boycott partially succeeded, sad to say. The sequel to ‘DaVinci’ – ‘Angels and Demons’ made no where near the box office success in the States that its predecessor did. The “word” had gone out from on high that the faithful were to shut their eyes, ears and mouths. Ditto for ‘The Golden Compass’ – which was to be the first in Philip Pullman’s 'Dark Materials' trilogy with ‘The Subtle Knife’ to follow. Up until now no word has been heard whether it will ever be done, and in any case, the 13-year old that starred in the original is now too old to reprise her role as “Lyra Belaqua”. A pity.

Meanwhile, twenty-two years ago,“The Last Temptation” (an excellent film by the way) had to close down as a result of the shouting, threats and intimidating behavior of screaming mobs outside the few cinemas that showed it. People interested had to catch it later on cable or on dvd.
WHY this need to try to control the minds of those who aren’t Catholics? The only reason is deep insecurity that their doctrines, teachings may not be “the Truth” after all, and any isolated counter-theories – even in fantasy form – represent threats to the meme of doctrinal perfection and completeness. If the Church was truly perfect and complete, it would be so secure in itself that it wouldn’t have to sic “The Catholic League” or other surrogates on anyone who interprets Catholicity in a different way – even when not Catholic.

Of course, the exact same complaint can be made against evangelicals. Like the Catholics, if their religious faith was really as perfect and in total possession of “the Truth” and “Salvation recipe” as they insist, they'd not have the need to attack outsiders – whether atheists, Mormons, Jews, Muslims or whoever.

The only reason for attacking outsiders – even if the outsiders criticize their beliefs – is because they are too insecure in their convictions, and they FEAR the criticisms will weaken the resolve and commitment of their faithful. It never occurs that their faithful can’t be that faithful if they might start thinking that what they see may have some appeal.

If evangelicals were truly secure in their religion they’d have no need to strike out, they’d be merely content that the “outsiders” simply don’t know any better. There’d be no need to rail against them and accuse them of being “Satan’s agents” or other nonsense.

Here’s another aspect: IF the evangelicals were truly so secure in their beliefs, and we know these beliefs are already spread far and wide by radio shows, TV and the internet – they’d have no need to engage in religious terror such as “witnessing” – which amounts to assaulting passersby on street corners, stuffing literature into their hands, and bruiting about “hellfire” threats if they don’t jump on the salvation bandwagon. Nor would they need to travel to far off nations like India, to evangelize the “heathens”- translated into mind-controlling them, like the RC Church seeks to do.

As it is, such alien religious evangelization and conversion have already engendered enormous internecine hatred between the majority Hindus and the newly minted Christians. This has led to ugly battles, burned out churches and hundreds of killings. Wisely, the Indian government has since imposed strict legislation limiting or outlawing outsiders coming in to convert their people.

So again, why the need to be so thin-skinned that they have to do this, or attack others? The authors of the piece in SKEPTIC give the answer:

“…religions are like bullies. One feature of bullying is that attacks are often made for no reason, aside from the ease of attacking the target. Such attacks can be used to establish dominance, or at least a reputation as someone to be feared and obeyed. …By forcing obedience in trivial matters – even harmless ones- religious leaders establish a reputation for punishment that allows dominance in more meaningful aspects of life. In this view the content of rules is relatively arbitrary.”

In the evolutionary psychology context, the biggest, baddest religious bullies - especially the ones that can inspire the most fear (while they intimidate with physical or other threats) are the ones most likely to survive the longest and compete most efficiently with other "bullies". No surprise then that most of these religions employ the myth of 'Hell' to instill obedience, even while they mutually threaten EACH other with Hell! Thus, do Roman Catholics warn evangelicals that they are destined for Hell's eternal fires - even as the evangelicals call this punishment down on RCs.
At the same time, religions ensure their survival by demanding their flocks use their sex organs in specific ways. Thus, RCs forbid their minions from using artificial birth control - in order to ensure RC numbers are never below a certain threshold, relative to all the Protestants. At the same time, both RCs and evangelicals prohibit abortion, again to ensure their numbers don't decline. They also prohibit it for all non-members based on a specious interpretation of human life- but the actual reason is to attempt to strong arm their own members - to show they won't tolerate such behavior even among non-RCs or non-evangelicals. This has gone to such extremes in recent election cycles, that half-crazed RC Bishops have actually threatened pro-choice politicians (in terms of RC faith sanctions) if they don't heave to. Talk about breaching church-state separation!
Thus we see that the alleged "moral" mandates of the biggest bully religions are designed as a form of selection to assure their survival in the competition with other religious memes. All their affected morality is actually expeditious, at their convenience - to control as many docile minds as they can. Still, this doesn’t get to why religious authorities (or even pretend ones) go after non-members who really should pose no threat. Unless their ideas do! Again, the SKEPTIC authors chime in:

“Perhaps the attention paid to suppressing the freedom of non-members is a way to signal the will and capacity to use force. Religions can condemn outsiders to remind followers of the social and physical consequences of disobedience- while avoiding provoking skirmishes within the group”

The authors go on to also point out that the most picked on outsiders are “limited in the ability to retaliate”. Thus, favorite targets of bully evangelicals like James Dobson or Pastor Mike are homosexuals and abortion service providers, doctors. It’s like shooting fish in a barrel for them. Atheists are less likely targets, since we have been much more empowered over the last five years- and will now strike out and hammer anyone who attacks us. We don’t “take it” anymore, and also go out and launch criticisms where we see fit – without waiting to be criticized ourselves.

If more people did that, including the members of assorted religions, we'd surely find fewer instances of bullying and fewer oppressive religions trying to control people's lives!
Posted by Copernicus at 10:45 AM