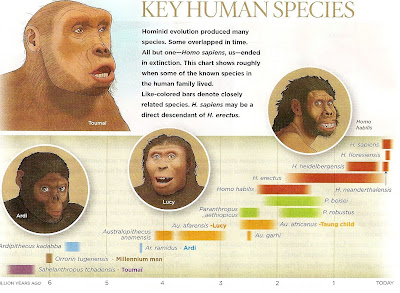 Some of the members of our imme diate hominid family line: including Ardi, Lucy and Homo Habilis. Seeing them ought to remind us we are animals without any "souls".

After dealing with the nonsense of "Hell", it's always nice to get grounded again via attention to our extended human family - as shown by evolution. (See image). As we all know, and can be grown-up enough to say, neither the descendants of apes, or apes themselves possess "souls". There is only a brain, but it is ample to generate consciousness as I already showed in my 'Materialist Model of Consciousness'. Thus, when a human (or ape) dies, that's it. He is gone and there is nothing left - nothing to "punish" and nothing to go on. This hard fact may be why so many evangelicals refuse to accept evolution: they don't want to accept: a) they have no souls, and b) when they're dead, that's it, finito.


As can be seen in the diagram, while dozens of hominid species were produced in the course of a 5-7 million period, only one: Homo Sapiens, prevailed in the survival game.

Much of this picture was recently completed with the incredible discovery of Ardipithecus kadabba or 'Ardi' as noted in a previous blog. The research that went into the composition of Ardi's fossil strcuture took nearly 15 years before it could be published.

Even before that extensive pre-publication preparation, diligent work at the particular digs had to be completed. In the words of one Ardi worker:

So, much for the fundie simpleton belief or assumption that one just walks out into a closed canopy or escarpment and pulls out complete fossils at will, as if the dynamic Earth itself would cooperate with this.

Even with dozens of fossils excavated the work wasn't finished, since CT scanners then had to be used on them and advanced computer imaging employed to digitally restore the crushed skull. The good news is that the effort was worth it.

The researchers, who published their findings in a series of 11 papers in Science this past year, showed Ardi wasn't a one of a kind but was located along with 35 other members of her species, in the Middle Awash. The other exciting aspect is that she represented a new type of early hominid, different from a chimp, gorilla or modern human. This came as somewhat of a surprise since the prevailing consensus was that any such early find should look and act like a modern chimpanzee. (Given chimps share 96% of human DNA).

As for Ardi, she was compiled based on finding 125 pieces of her skeleton. In total construct, she appears to be a female nearly four feet in height, weighing 110 pounds, with a body and brain the same size as a chimpanzee. She also walked basically upright, as deduced from her upper pelvic blades. As inferred from the diagram, she goes back from 6-7 million years.

Did Ardi or Toumai or even "Lucy" (see diagram) have any kind of mental lives? Did their consciousness extend to considering their own mortality? Not very likely! From the plausible structure of their brains (and the under-developed neocortex) the only items that dominated their attention were getting food, avoiding large predators, and maybe caring for their offspring.

Crude thoughts of mortality, possible rituals for the dead, probably didn't arise until Homo Habilis, 1.5 to 2 million years ago. Of course, with a still underdeveloped neocortex, there would have been no thoughts of an afterlife. No "heaven" or "hell". A near-ape doesn't have the brain architecture to invent such.

Even our immediate Cro-Magnon forbears wouldn't have developed any concepts of "Hell" or "Heaven" because these sort of notions (arising from a split consciousness) weren't on the radar. The first emergence of a split consciousness (see: Julian Jaynes' 1976 work, The Origin of Consciousness in the Breakdown of the Bicameral Mind ) didn't come until about 100,000 years ago.

as Jaynes put it:

"...the brain activity of ancient people...lacked the sense of metaphor and individual identity that characterizes a more advanced mind...some of these synaptic leftovers are buried deep in the modern brain, which would explain many of our present-day sensations of God..."

As further noted, a base concept of "God" (or meme) was needed before a reward-punishment model could he proposed.
Okay, good news and bad news.
The good news is that our brains have "jumped ahead" in their conceptualization and abstraction capacity. The bad news is that most of it is based on gibberish, and doesn't exist. Because of Jayne's "synaptic leftovers" the human brain is a hostage to nonsense as well as mind viruses that bear nonsense (such as "Hell", or Nazism or racism). What plays into this pernicious dynamic is the brain's ability to forge nonsense words for which there need be no parallel in reality. If someone says "the bat-winged elephant-baboon jumped over the eight dimensional Moon" that doesn't mean that anything real has transpired, other than in the firing synapses of the afflicted person's brain.

How does one check that something claimed has actual validity? Would any of our earlier hominid ancestors possessed such ability? Hardly! That would have to await the development of empirical science starting arond the time of Galileo barely 450 years ago. Until then, superstition reigned.

Science and reason have cleaned out most of the superstitious rubbish, but stubborn corners and residues remain- particularly in the enclaves of extremist religions.

The good news - brought to us by our neighbor ancestors in the hominid family- is we know all the claims of soul demise and death-punishment are portentous rubbish - since we, as the "naked apes" we are, no more possess souls than Ardi, Toumai, or our other (chimpanzee) ape relatives.

It is time people grow up and ditch this crutch once and for all. The fact of human ape-hood (meaning our common descent, with chimps & other great apes) excludes soul. Never mind any and all language delusions that fabricated such a fiction, or invested it with false validity and specious rationalization. Once humans renounce the childish concept of soul, they simultaneously extirpate the tandem concept of hell. Have our ape cousins or hominid forbears ever exhibited such worries? No, because their brains have precluded forging such delusions.

As soulless Materialists, we (naked apes) look forward to mere nothingness at death, just as our hominid cousins have experienced for nearly 7 million years.
Posted by Copernicus at 3:03 PM