Concepts of Order & Disorder I

Fig. 1: Fine splitting of spectral lines which discloses the basis for electron spin. 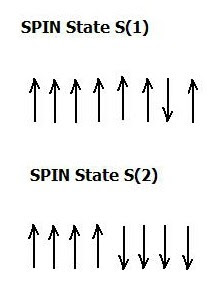 Fig. 2: Two electron spin systems distinguished by their "spin excesses" to arrive at the degree of order.

One of the ongoing aspects of physics (and biology, e.g. in evolution) that challenges the faith of some is how order can arise spontaneously from chaos. What I want to do in the next series of three blogs is attend to this and show how it is not only possibly but probable – including through the use of examples.

Prior to the development of the area of science known as statistical mechanics, supernatural explanations were invoked to account for perceived order in the universe. Since no working physical models were available, religionists felt that it was incumbent upon them to provide the answers. In extreme cases, such as St. Thomas Aquinas and later William Paley, these ‘explanations’ were even used as proof of the existence of some supernatural deity. Paley, for example, invoked his Paley, for example, invoked his ‘watchmaker’ analogy as relevant to the universe.

Of course, religionists like Paley made several serious errors in their formulations. A major one was presuming that the universe tended uniformly toward a state of order. In fact, this isn’t the case at all. Modern astronomy along with plasma physics has shown cosmic order to be mostly exaggerated and where it does exist, confined to very limited systems. The giant relic structures of the Big Bang (discovered by the COBE mission in 1992) are neither orderly in distribution or form. Exploding and colliding galaxies aren’t ‘orderly’. Dark matter and energy, as we saw in earlier blogs, probably makes up 90-95% of the universe, and can’t even be detected directly, far less assessed for ‘order’.

The use of the order paradigm for the cosmos is now recognized as the byproduct of a bygone era: in which astronomers didn’t have access to the wide range of instrumentation available today. It also hearkens to an era in which the assumption prevailed that what one saw was what was actually there. The prevalence of dark matter and energy, of course, resoundingly refutes this.

Among the simplest useful systems to consider for degrees of “order” are electron spin systems. A fact of 20th century physics is that all electrons have a property called spin that’s either up (+½) or down (-½). The numbers are "spin quantum numbers" and the main thing to remember about them is that they refer to different directions in the atom, and differing energy states. (The plus state slightly higher than the minus). An atom can assume a net spin as a result of the spins of the constituent electrons. Helium, for example, has two electrons which are forbidden to have the same spin numbers at the same time and so the net spin of the Helium atom cancels out: (-½) + (+½) = 0

Observationally speaking, spin is inferred from hyperfine splitting of atomic spectral lines(see diagram). That is, the spectral line splits into two slightly separate lines of differing energy as shown (in the diagram, Fig. 1, the upper level has slightly more energy than the lower.)

For starters, let's say that there is a system consisting of eight atomic magnets. These atomic magnets exist temporarily in the state S(1) as shown at the top of Fig. 2 (i.e. each arrow denotes the net spin of the atom based on the sum of electron orientations within it):[1]
We want to find the degree of order applicable to the system. We can sketch the system elements like:

The degree of order, as well as information, is determined from what is called "the spin excess", or the net spin difference (up minus down or vice versa). The larger this number, the greater the degree of order, and the lower the entropy of the system. It’s easy to see from this that the state S(1) possesses the second highest order accessible to the system of 8 atomic magnets. (The highest would correspond to the case where all spins are in the same direction.)

By contrast, consider a second system which is in a state S(2) as shown in the bottom of Fig. 2:

Which state would conform to the “equilibrium” or lowest order state, and generally also with the highest entropy.

In the thermodynamic study of chaos, similar approaches to equilibrium can be examined by permitting far from equilibrium changes. Given the right fluctuations, it’s even possible to generate self-organization from pre-existing chaos. The ultimate example is the formation of matter in the universe. From amidst a sea of pure energy, the ambient temperature cooled, re-setting the so-called Higgs Field f from a zero to a non-zero value. This re-setting of the cosmic thermostat enabled the production of material particles in a sudden and spontaneous breakdown of symmetry.

A mundane example is a two-dimensional Ising model for ferromagnetic matter. It contains magnetic domains for which the individual spin magnets can be subject to sudden reversals. For a simple example, think of an Ising model with 8 rows that look like the top of Fig. 2 - with 8 spins and all aligned up but one. Here the Ising model system, by virtue of undergoing spontaneous magnetization (say from a state in which 5 ups and 3 downs appear in each row), discloses a higher degree of order at the later time t(0) + t, where t could be in billions of years or hundreds of seconds. (Depending on the system). The reader should also note that each arrow can represent a region of indefinite scale size. For example, the depiction given above might conceivably represent the evolution of an (essentially) two-dimensional current sheet in a highly compressed magnetic region near a sunspot. The arrows would represent plasma flows and current densities that follow magnetic field lines.

Chaos theory, spurred on by a number of notable successes, sheds new light on the numbers. Particular offshoots of Chaos theory disclose entities such as ‘strange attractors’ that can actually spur a system toward an enhanced degree of self-organization. We call such a turning point a bifurcation. Bifurcations represent sudden, abrupt changes toward higher degrees of organization of a system. These include the sudden alteration of system development from equilibrium[2] (maximum entropy) to non-equilibrium.

One of the simplest examples of a non-equilibrium system is a simple chemical reaction of the form:

where X, Y, W are arbitrary reactants that meet the conditions. We note here that at equilibrium, detailed balance requires, with k1, k2, k3 and k4 the respective concentrations:

Similarly, a stationary state ‘far from equilibrium’ is disclosed by the concentration equation:

Note that in such a state, far from equilibrium, it isn’t necessary for each separate chemical reaction to balance in both directions. Clearly, non-equilibrium discloses aspects of the system that are inhibited when it is at equilibrium.

Next: More complex examples of spontaneous order arising from chaos.

[1] In terms of probability, the more atoms oriented the same way the less the more "ordered" the state. Hence, higher entropy corresponds to the most probable state, defined by the minimal spin excess of zero. Thus, in the first instance we can always distinguish the more ordered state by its spin excess.

[2] By way of reference, the equilibrium state is regarded as a universal point attractor.
Posted by Copernicus at 12:57 PM