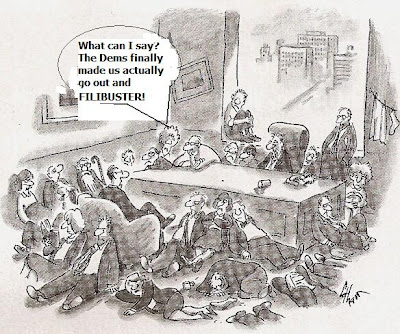 How has it come to be that our government is essentially tied in knots, and a measure (filibuster) once used sparingly (as intended by the Founders) is now used at every opportunity by the opposition GOP – and requiring 60 votes to pass anything?

The answer is a re-interpretation and casting of the filibuster - from an actual act which one had to perform in public (e.g. reading from the D.C. phone book for 14 hours on the Senate floor) to a passive “intent to filibuster”. As comic George Carlin often framed it: “And since when did this transpire? No one has informed me, no one has told me of this new way of doing things!”

Well, it appears it’s transpired in some secret Senate Cloak room where a tacit agreement was made by the corporate-owned Senate sleazebags that “henceforth we shall not actually demand you to get up and filibuster- but shall stand in awe and abeyance as you threaten to do so”

Which paves the way for total government paralysis and the idiotic demand, made popular by the corporate –owned media whores, that henceforth 60 is the new ‘51’ to get anything passed.

How to get things done? It is time the Democrats stop running from cover and now act like men instead of mice. They already lost their 60-majority but the hard fact is they don’t NEED it to get any serious laws passed, including a version of health reform. Do you think that Dumbya Bush waited for 60 plurality to get his tax cuts passed in 2001? (Which originally opened the gaping deficit hole we now face, along with his stupid “wars” of choice – actually occupations).

NOOOOOOOO…..! Newsflash, he did it via a 51 vote reconciliation. Contrary to the spin circulated by repukes, this is not some subversive, diabolical device – but a well known budgetary instrument. It’s time the Dems stop trembling, and get off their butts and use it.

The first step to doing so is to make the Reeps actually get up off their fat asses and FILIBUSTER! Make them read their bibles, the DC phone book, War and Peace….whatever. No MORE “intention to filibuster”

If you threaten to filibuster, say against a climate change or health reform bill, then you are obliged to actually get out on the Senate floor and do it – for 57 hours or 57 days (as the Rs had to do it in 1964 when they sought to prevent the Civil Rights Bill from passage))

The acceptance of the intent to filibuster as a true filibuster destroys the basis of functional government and cannot be tolerated anymore.

Will actual filibustering make things messy and take longer to get to the objective? Of course, but that’s the way it was meant to be – and WHY it’s historically been used so infrequently. When you make filibustering neat and tidy – then any idiot or idiot party can invoke it any time and tie up government to serve their agenda at their whim.

The Dems need to return the filibuster to what it was meant to be: an actual ACTION requiring active participation - using phone books, bibles, long novels…whatever. Where REAL Senators had to stand up and screel on for hours or days, not even being able to use restrooms (well, ok- they could relieve themselves in glasses)

By wussily acquiescing to the ‘intent to filibuster” and letting Reeps have their way on that basis, the Dems are contributing to the collapse of governance. Grow a pair, Dems, or don’t blame your supporters if they bail on you and come to believe you simply aren’t up to the task of LEADING!
Posted by Copernicus at 9:05 AM