Venom? You Must be Kidding! 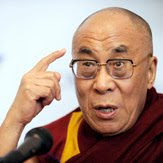 The Dalai Lama addresses the South Florida media. Will a certain "pastor" avail himself of this opportunity to gain some small nanobyte of enlightenment?

It's absolutely incredible how some people (like a certain “pastor” ) can exhibit perceptions so deformed and distorted that they border on lunacy. To be specific, this pastor has taken extreme umbrage at the Dalai Lama visiting Florida Atlantic University and giving a talk. He declares that he’d prefer the Dalai Lama “not spread his venom.”

WOW! Talk about classical psychological projection! The only venom I see and on a nearly day- to -day basis exudes from Pastor Mike’s illustrious website. Meanwhile, the Dalai Lama is a man of peace who seeks peace and tolerance wherever he goes. This is why he inspires most of the human race – excluding the most extremist, bigoted zealots.

In his terrific book, ‘Many Ways To Nirvana’, the Dalai Lama shows humans how they can be at peace with themselves and thereby attain a relative Nirvana – which is the Buddhist state of final bliss embodied as a kind of nothingness. Achieving this state also translates into achieving Buddahood.

The glory of Buddhism is that the potential exists for every Buddhist to attain Buddhahood. Meanwhile, Christians (most – not including the Science of Mind) insist only Jesus attained Christhood.

The Dalai Lama’s insights could also be of use to narrow-minded haters (who justify their hate based on their “good Books”) in showing them how to open their minds and hearts to others. According to the Dalai Lama (op. cit., p. 38):

“In Buddhist practice one thinks about the infinite sentient beings and their problems and suffering …..Because of this, one becomes more understanding and concerned and one’s mind becomes more spacious. One’s problems thereby become insignificant”

Thus the problems of an intolerant, self-righteous person – who brooks no acceptance of anyone or any beliefs apart from his own – reside in his own deliberate isolation from the rest of humanity. He cannot be friends with Buddhists, Atheists, Jews, Mormons, Muslims or even fellow Protestants – who don’t believe exactly as he does.

The problem is that by isolating himself in this way, he subjects his mind to derangement, and that includes being insensitive to the suffering of humanity at large. Instead, he is focused on the suffering of one human 2000 years ago, who is long since dead. A very charismatic rabbi but not a “Savior” by any means. In Buddhist terms, as Alan Watts has pointed out ('This Is It', p.50) any religion that descends to mere formualaic prescriptions (e.g. “Believe on the Lord Jesus Christ and you are saved”) risks “an empty formalism with no heart, the very Pharisaism against which Christ railed”.

In such a “Pharisaism”, the self-righteous can call out others for opprobrium and “venom” – but never ever see their own. They are rendered blind by their derangement, which interprets the world as fractured into "things": disparate entities- one against the other. This localized (or separatist) form of thought is alien to the Buddhist.

“Their (Buddhists’) goal is a state of inner feeling in which oppositions have become mutually cooperative instead of mutually exclusive, in which there is no longer any need for conflict between the individual man and nature, or between intelligence and instinct. The view of the world is unitary and in such a world there is no absolute urgency to be right rather than wrong or to live rather than die”

This is a momentous quote because it encapsulates so much of Buddhist philosophy. Of course, it will appear alien to an evangelical for whom the “urgency to be right” trumps almost all other aspects of existence. The fact that evangelicals find they can only be right if they denigrate and dispel all other beliefs, shows they exhibit a pathology which the Buddhist compares to psychological blindness.

Since in the unitary Buddhist view there is only ONE reality, and we are all part of it, there’s no need to combat anyone or any other belief.

Interestingly, the extremes of separative perception come close to psychosis. We know, for example, that the basis for psychotic experience is an extremely agitated hyper-vigilant awareness and “fight” stance. The individual locked into this orbit perceives external enemies everywhere and they are interpreted as opposing his existence – or what is construed as such - in his belief system. Thus, those who in any way oppose his belief system are seen to oppose his existence and identity. The only response for him: to make war on them, call them out, defile them and insult them.

The confirmed psychotic goes even further than perceptual isolation to a state of enmity and dislike, wherein he transforms his opposition further via demonization. Thus, he renders them so alien and hateful they are no longer even human. They become detached noxious "things" in his reality, and so can be hated. The Atheist, the Jew, The Black, the Mormon, the Muslim…all become secondary objects of vilification as one associates each with demoniality and less with humanity.

This person, if Jungian analysis is attempted, will be found to actually suffer from severe ontological doubt. He’s actually uncertain of the validity of his beliefs, but he finds that by persecuting others – other faiths, other beliefs or others’ non-beliefs- he artificially raises his own stock. Or, at least his perception that his stock and capital is as good as anyone else’s.

The Buddhist has a word for what he is enduring and it’s called suffering or 'dukkha'. It emerges because the Earthly wayfarer has gone off the tracks in becoming fixated on middle-order reality (though the wayfarer is like a drunk and won’t see that!). This reality is the one attendant on “things” and separation, therefore dualities: good and evil, beauty and ugliness, black and white, God and Satan, Heaven and Hell, etc.

But for the unitary thinker these dualities cease to exist. Indeed, the ultimate concept – "God", is for the Buddhist one that dispels and removes separation between God and Man. There is only a unity, hence one (God) cannot be above or removed from the other (Man). As the Dalai Lama puts it in his ‘Many Ways to Nirvana’(p. 71):

“What is God? The word in one sense means ‘infinite love’. I think Buddhists accept that. But Buddhists do not accept God in the sense of something supreme, in the center, or something absolute…a creator. Buddhists find a lot of contradictions regarding that concept.”

And indeed, we’ve explored many of these contradictions already in two previous blogs on “Truth, Existence Claims and God Talk:
http://brane-space.blogspot.com/2010/01/truth-existence-claims-and-god-talk.html

A final point bears emphasis: when the semi-educated attack Buddhism they usually don’t make the distinction between its differing schools of thought: Vaibhashika, Sautantrika, Prasangika Madhyamika and Cittamatra.

I do not intend to evaluate or examine all of these in turn, only to make the following observations (as one who has studied Buddhism in concert with a Comparative Religion course taken at Loyola in 1966-67, and later in independent reading):

1- All the Buddhist schools refute and reject the “soul” as an independent and separate entity – e.g. from the physical body. (Dalai Lama, op. cit. p. 16)

2- All agree that the inability to locate or discover such a separate entity means it cannot exist (Dalai Lama, ibid.)

3- The Prasangika Madhyamika and Cittamatra schools go even further and assert that “no autonomous and substantially existent person” exists (Ibid.)

The fantastic conclusion – especially of the last- comports intensely with the findings of non-locality in quantum mechanics. Indeed, if at the quantum level all barriers vanish and no separability exists, then we are all one unitary wavicle or maybe “human wave function”

Perhaps if more Christian fundamentalists seriously studied Buddhism – as opposed to discarding it as “venom”' they’d help to mute some of their more overt psychotic perceptions.

To see His Holiness’ meeting with the South Flordia Media, go to:

http://www.dalailama.com/webcasts/post/83-his-holiness-meets-with-south-florida-media
Posted by Copernicus at 10:59 AM

"He cannot be friends with Buddhists, Atheists, Jews, Mormons, Muslims or even fellow Protestants – who don’t believe exactly as he does."

Great article and you really nailed it. I checked out your idiot brother's blog and oh....wait, HE will allow "friendsip" BUT.....Big BUT there, according to him (latest blog):

"Therefore, we are NOT to be "companions / friends" with a non-believer, but we ARE to befriend them in order to share the Good News of Jesus with them. "

In other words, NO true friendship at all, just exploiting you or other nonbelievers on HIS terms to pump you full of their stupid, half-cocked rubbish. It's just as I always figured (Jani too), he doesn't want to act remotely friendly to you as your bro unless you buckle under to his KJV-induced dictatorship.

Boy, I can really see now why you will never be able to be friends with this asshole. Since doing so means being subservient to his gospel messaging crap.

Well, you can't choose your family. Best thing is flush him and his psychosis down the old toilet.

Personally I wouldn't waste another blog on him or any of the crud he writes. He's useless and waste of air and space.

Caleb, thanks for your blunt but honest pov. As I suspected from the very beginning, my brother only made initial contact with me (2 yrs. ago)-to try to pander his biblical salvation teachings – there was no genuine, sincere desire to be friends as brothers. And to me, unless you begin with genuine friendship devoid of ulterior motives, you’re just using people for your own ends.

There was a brief interval of time just before and after our dad’s death last July that I thought we were friends, based on telephone and email contacts, but within months he went back to his old Elmer Gantry pose – hard –assed as ever- and that went by the backboards.

It’s bad enough our sister and mother are incommunicado, but to now have us as brothers at each other’s throats is unbelievable. One would think that with dad’s death Mike would be able to put this shit behind him and grow up for once, but it appears his beliefs mean more to him than any meaningful relationship with his brothers. He’s prepared to be “cordial” according to the same blog piece, but not to extend that to true friendship.

The guy has allowed his stupid religion to set up an impervious barrier to felicity and brotherhood as when he belches:

“Was Jesus 'friends' with the Pharisees and Sadducees when He called them "hypocrites' , "fools" , "serpents" , "vipers" , and damned them to HELL !!”

Again, showing total contempt for me as an unbeliever. Oblivious to how this self-righteous rot comes over. And how sickening it is.

The poor, deluded fool then goes on to say:

“But what profit is there in being willing to go to hell with others, because they will not go to heaven with us ? The way to eternal life is narrow.”

Unaware that THIS is the only life there is, the only opportunity for brotherhood and friendliness and putting away our differences. And yet he’s prepared to trash it all for a gimmick – some dream of future pie in the sky to sit with his “savior”

Newsflash, Mike - there is NO Savior, no Heaven, and no tomorrow. THIS is the only opportunity we have- and YOU are prepared to piss it away out of false rectitude.

Personally, I believe my brother is mentally ill, maybe even partially demented from the stroke he had last year, which appears to have made his bible thumping screwball screeds even worse.

All I can say, Mike, is I truly hope you're happy and content with your god and future “heaven” then. I hope it’s a worthy substitute for your brothers.