A NEW EYE ON THE SUN 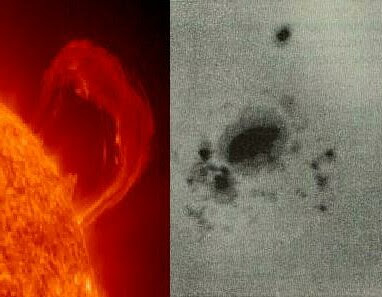 An erupting solar prominence (left) and a large delta-class sunspot group (right). With the new Solar Dynamics Observatory, we'll be able to see much finer resolution for each event, and possibly even how flares, prominences start and the detailed fibril patterns in spots.

Since the slicing of budget funding for the Solar Optical Telescope (SOT) in the mid 1980s, solar astronomers have been left with only some specialized satellite detectors (like Hinotori) to monitor our nearest star. This is especially crucial now as we have entered a new solar cycle (24).

Solar workers, therefore, have been hearted to see the new 6,800 lb. Solar Dynamics Observatory come on line, and launched February 11th aboard an Atlas V rocket. The mission will be to study the variability of the Sun from a geo-synchronous orbit (e.g. 22,400 miles high so that the craft’s speed matches the rotational velocity of Earth). Especially exciting, is that the craft’s telescope will constantly be taking high resolution images – sorely needed to detect such things as the site for flare triggers in coronal loops.

The mission is not merely for aesthetics or pure science. There are real practical benefits to being able to predict solar hiccups more accurately. When the nearest star acts up it can affect satellites, power grids, aircraft navigation controls and routing, GPS quality, Blackberrys, cellphones and short wave or even TV.

Many of recall when large flares erupted in March of 1989 and knocked out the Ottawa power grid for ten hours. When the two inch cables at the main transformer were examined, they were found to be fried …literally. As if subject to a giant short circuit.

According to Dan Baker, Director of the University of Colorado’s Laboratory for Atmospheric and Space Physics,

Most exciting, the craft’s instruments will take measurements every 10 seconds, and at ten times the previous resolution (1 arcsec). This affords a quantum jump in both temporal and spatial resolution. Many flare researchers, including myself, believe the key flare triggers probably manifest at scales from 0.1- 0. 3 arcsec at or near the apex of solar coronal loops. So the enhanced resolution here in the SDO will be at about the optical limit- meaning there is at least some probability of obtaining evidence for how loop flares begin.

If this can be ascertained, we may finally be able to develop fully self-consistent flare models.
Posted by Copernicus at 8:48 AM