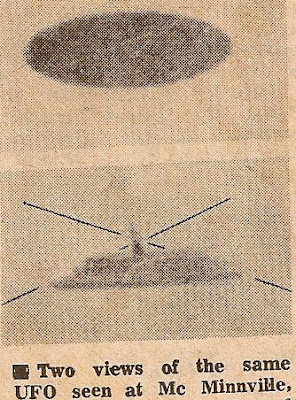 It's been a while since we examined the UFO phenomenon, so let's do so again. Once more, one may inquire: Do UFOs exist? Is there such a thing? As I noted in my original blog on this:

'A Perspective on the UFO'

"Unidentified Flying Objects or UFOs are an observed and recorded fact, as much as the Sun rising every morning. The existence of UFOs is a matter independent of "belief".

I then went on to elaborate:

"What remains open to question is the particular interpretation of the UFO. Here is where the astronomer can provide useful insight by introducing his or her audience to the notion of scientific hypotheses. Several are applicable to UFOs, which I will explore in detail later. They include: 1- a misidentified known object (planet, airplane, or balloon); 2- an unknown natural-meteorological phenomenon; 3- a psychological phenomenon and 4- a genuine craft from another planetary civilization. Note that depending on viewpoint, an astronomer may or may not regard (1) as a valid hypotheses. I do, because further research can be used to verify it."

I then went on to assert that the error most commonly made by many who write about the phenomenon, is taking "UFO" to be identical to "spaceship from another world" - which is realy a HYPOTHESIS for the UFO. All UFO technically means, is "unidentified flying object" and my own 25-odd years of investigations - using 5-page NICAP report forms (requiring everything from altitude to angular speed), disclose a hard core of 4-5% reports always remain unexplained.
In my own UFO observation, reported in that blog, I noted:

"I witnessed a brilliant orange disc, at least the same diameter as a full Moon, moving rapidly from north to south. It hovered for two to three seconds above the crowd at the shopping center and I detected the odd "Oooh" or "Aaah" from random spectators. Thus, I knew I was not having a simple hallucination (at least not by myself!) The most ironic and notable thing to me was the complete absence of sound. No whirring, like one would expect from a helicopter's propeller blades, or engine noise. The object - if "object" it was - appeared to be a light source rather than just reflecting light from elsewhere. After about three seconds it took off due south at what I estimated to be an incredible speed. As a seasoned sky observer, even at the age of 16, I was able to quickly eliminate all known man-made or natural objects from consideration. The exceptional luminous and dynamical behavior allowed this. Nevertheless, to this day I am not prepared to pinpoint a specific hypothesis in any dogmatic sense, though up until recently I have gravitated toward (4)."

The same object was reported at Miami International Airport barely 2 minutes past the time my brothers and I observed it at the Miami Gardens Shopping Mall in Carol City (off 183rd St.). Since the two locations are about 12.5 miles distant, this meant that it covered 12.5 miles or 66,000 ft. in ~ 120 seconds, for an estimated speed of 550 ft/sec - assuming constant speed. This is roughly 375 mph, or the speed of a slow jetliner.

Of course, notions of speed are dependent on the altitude of the object. Assuming it was at relatively low altitude (say 2,000') it would have appeared to move extremely fast, even though it was only traveling at about the pace of a regional jet making its descent. (Interestingly, an object 18' in diameter - flying at an altitude of 2,000', would subtend an angular diameter of just over half a degree in the sky, or about the same as the full Moon)

Let us now move to explore the hypothesis that at least some of the unknowns reported are actual space craft. What evidence do we already have, and what might we obtain - or need to look for- to verify the hypothesis as approaching ironclad?

Let's start with the most detailed investigation ever, under the leadership of physicist Edward U. Condon and published in The Scientific Study of Unidentified Flying Objects, which was conducted by the University of Colorado under contract to the United States Air Force. In the 966-page study, hundreds of cases were examined in detail- from their optical and thermal properties, to their dynamics. Nearly 99% were dismissed as "identifieds" at the end, BUT a core of unexplained remained, including a number with accompanying photos.

One in particular was Case 46, from McMinnville, Oregon. The researchers who carried out the study reported: "This is one of the few UFO reports in which all factors investigated- geometric, physical and psychological, appear to be consistent with the assertion that an extaordinary flying object -silvery, metallic, disc-shaped and tens of meters in diameter- flew within sight of two witnesses" (The accompanying image shows two views of the object as it was photographed)

One very interesting feature is that the craft's underbelly shape appeared very similar to the shape I saw in Carol City, FL. Let's now consider how much more exacting we need the investigations in order to nail down the extaterrestrial nature of UFOs.

Some of the best insights here are provded by astronomer Peter Sturrock, in his book: The UFO Enigma: A new Review of the Physical Evidence, Warner Books. Reports of UFOs, as Sturrock indicates, can be at least subjected to statistical tests (e.g. z-test, chi-squared) to test a stated null hypothesis: e.g. that the phenomenon is as likely to be caused by random meteorological or other agents as artificial craft from "another world". In terms of a comprehensive scientific process of investigation, Sturrock notes the following are all of use (pp. 94-95):

“Soil has the capability of retaining the effects of several processes including mechanical, thermal, magnetic, radioactive, and physico-chemical:

i) Mechanical – A continuous or brief mechanical pressure distorts the soil, and this can be measured by a penetration instrument.

ii) Thermal – Measurement of the quantity of water in the soil as compared to other nearby control samples, allows determination of the amount of energy required to reduce the water content to that level.

iii) Magnetic: Some soils have a high magnetic remanence. In this case it is useful to examine the magnetic pattern of the soil with the help of magnetometers either in situ, or in a laboratory.

iv) Radioactivity: Soil samples can be analyzed either in situ, of in the lab using recovered samples.

v) Physico-chemical: Samples from the trace region and control samples (recovered far from trace region) can be analyzed for molecular, atomic and isotopic composition.

Even if only photographic (or video) imagery is available, numerous physical analyses can be applied (cf. p. 178-179):

i) Measurement of the diameter of the film’s crystals
ii) Obtaining the Modulation Transfer Curve (plot of response vs. spatial frequency)
iii) Obtaining spectral sensitivity curve (log of sensitivity vs. wavelength in nm)

i) Linear measurements made on an enlarged print – in tandem with elevation angles made using a surveyor’s transit of the location and objects in the vicinity (buildings, Mountains etc)

ii) Micro-densitometry scans: e.g. using the Joyce Loebl Recording Micro-densitometer to ascertain variations in optical density in the print. The result is obtained as a scan through the disc image (of the UFO for example)

Digital enhancements may include high-reverse contrast images of the disk itself, e.g. Fig 25-20 on page 207 of Sturrock, which discloses the left side of the particular disk is not a circular extension of the rest of disk – but is rather flattened to some unknown extent.

All of the above are eminently doable in terms of modern available technology. All that's required is the right confluence of circumstances - that is, an encounter or proximate sighting of a UFO which allows all or most of the preceding to be accomplished.

Remember, we aren't out to "prove UFOs" exist, since that already had been done according to Prof. Allen J. Hynek's UFO definition:

“A UFO is the reported perception of an object or light seen in the sky, the appearance, trajectory and general dynamic behavior of which do not suggest a logical, conventional explanation and which is not only mystifying to the original percipients but remains unidentified, after close scrutiny of all available evidence by persons who are technically capable of making a common sense identification, if one were possible.”

We are, rather, out to show adequate criteria for QA in the data and evidence exists, to show that the hypothesis of UFOs as extraterrestrial craft is at least confirmed beyond reasonable doubt.
Posted by Copernicus at 2:16 PM