Bitcoin: How A Mathematical Artifact Became A Bubble - And Now Needs To Be Regulated 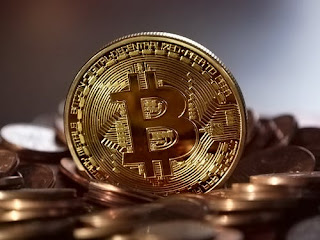 The headline ('Crypto Investors Dig Out of Disaster') in the Markets section  (p. B10) of the Jan. 2, WSJ  was not exactly an earth-shaking revelation to those who've been following the fortunes (or misfortunes) of crypto-currencies like bitcoin.  So we kind of muttered 'Meh' on seeing the quotation:

"A lot of people got punched in the face when bitcoin fell below $6,000"

According to Chris Burniske, author of 'Cryptoassets', and also a partner at the venture capital firm  Placeholder.   And as we further learned::

"After rising nearly 1400 % in 2017, bitcoin reversed hard in 2018, falling about 70 percent and erasing some $160 billion worth of value.  The selloff exposed the budding currency market's shaky footing.

Despite the entry of some established Wall Street players, scammers abound and few tangible uses for bitcoin and its underlying blockchain technology have emerged."

"Where does the digital currency market go now that many speculators have been wiped out?"

Well, I'd say 'nowhere'. Or at least they shouldn't.  One huge strike against it is that bitcoin is not a real entity at all but a mathematical creation,  an artifact invented by quants using obscure equations for its design. So it is a virtual currency only,  as well as being built on shaky assumptions for security and transparency.  While I know my Morgan silver dollar (which I can hold in my hand)  has the full faith and credit of the U.S. government behind it, all I know about bitcoin is something called 'blockchain' is supposed to assure us of legitimacy.

In this respect, bitcoin is called a :cryptocurrency" because its very existence relies on the abstruse mathematics underlying cryptography to exist in the first place. Mathematics such as the peculiar functions known as elliptic curves, i.e.

Thus, for example, bitcoin uses elliptic curve technology - a type of public key cryptography = to ensure the validity of transactions. I.e. that the bitcoin you are using is every bit as valid as the one I am using.  You can learn more here: about elliptic curve cryptography.

An inherent problem has always been with the potential duplication of bitcoin and especially  using it to generate "counterfeit" bitcoin. Think of it this way: I mathematically invent a digital currency using fractional calculus and call it a "Copernican Copper'.  Fair enough. But then if I send my precious little virtual 'copper' off  to ten friends they might simply cut and paste it and send it to ten of their friends. In no time the value would be gutted, and any hopes for a speculative "market" dashed. . But on the other hand, if one absolutely halts such a crypto from being duplicated, he also stops it from being circulated and it still becomes worthless.  Catch 22 here?  Not really.

While this would pose a humongous problem for any virtual currency,  Bitcoin attempts to solve it using what's called  "blockchain".  Basically, this is a registry of all the Bitcoin transactions to date, and which all users can see.  It includes: when the Bitcoins were created and the dates for transactions between individuals.   The problem then becomes ensuring the blockchain is accurate. This is accomplished using powerful, number crunching computers that basically solve fearsome elliptical equations that help in verifying the Bitcoin transactions, dates, and hence the blockchain is accurate. If not, then it wold be possible to steal or duplicate the currency.

This then gets us back to the confidence of investors in Bitcoin and all the other cryptocurrencies,  namely those who remain "wary of owning too much of the still risky market" (ibid.)  And to quote once more Mr. Burniske of Placeholder:

"Crypto has a hard time realizing how small and nascent it really is."

Which may well be because there remains the need to develop a means for determining a fair price for Bitcoin and the other virtual currencies.   This effort may well get a boost when the Intercontinental Exchange Inc., the parent of the New York Stock Exchange, launches its crypto-based exchange Bakkt.    This exchange will allow customers to buy, sell, store and spend digital currency.  If Bakkt can prove as safe and secure as the NYSE it could alleviate the concerns of may investors.

But, like the NYSE - especially with the obscure credit derivatives  that infiltrated the markets in 2007-08  -  it will not prevent speculative asset bubbles or busts.  Recall those credit default swaps were also mathematical creations, using something called the Gaussian Copula formula, e.g. 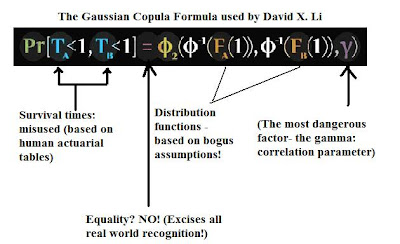 The formula, invented by David X. Li while working at JP Morgan Chase and articulated in his (2000) paper: ‘On Default Correlation: A Copula Function Approach”  was blamed for “wrecking your 401k” according to an article ('A Formula for Disaster’) appearing in WIRED  in 2009.  On account of the lingo used and the complex nature of the underlying formula – few ordinary mortals would figure the credit default swaps  (CDS) out before it was too late. I n the meantime, the Gaussian formula itself allowed the credit derivatives to be sliced and diced numerous ways to package them throughout ordinary securities such as collateralized mortgage obligations.  The failure of the credit agencies themselves to be onto the junk bond nature of CMOs and allowing the presence of one fraction of ‘AAA’ bonds in each – then designating the whole AAA - led directly to the collapse of the credit markets in 2008.

In many respects the rush to CDS especially in the baking system,  was the result of a bubble, in  this case of a risky asset that insinuated itself into bonds.  It was difficult to track because of its complexity and the mathematics used to create it, which was beyond the comprehension of nearly everyone but the quants.   As Jack Rasmus, author of 'Central Bankers At The End Of Their Rope' has put it:

"Is Bitcoin the new ‘Subprime Mortgage Bomb’? Just as subprime mortgage bonds precipitated a crash in the derivative, Credit Default Swaps (CDS), at the giant insurance company, AIG, in September 2008, setting off the global financial crash that year—will the Bitcoin and crypto-currency bubble precipitate a collapse in the new derivative, Exchange Traded Funds (ETFs) in stock and bond markets in 2018-19, ushering in yet another general financial crisis?"

"A speculative craze isn't defined by its frequency or even its amplitude, which makes defining a bubble tricky.  When bitcoin appreciated by more than 1 million percent ab expert in manias said it didn't meet his criteria for a bubble. Months later, bitcoin finally ticked off nearly all his boxes."

Which shows me the expert's 'perception of a mania or asset bubble was too conservative.   In the case of Bitcoin, as with CDS, another striking alarm was the use of leverage for purchases. Many institutions went way out on leverage to purchase CDS back in 2007-08 leading to the unimaginable amount of nearly $55 trillion in toxic assets left on banks' balance sheets. (See e.g. 'The $55 TRILLION QUESTION' FORTUNE, October, 2008, p. 135)


The same applied to Bitcoin where we learned WSJ, ibid.) "stories of people selling all their possessions to invest in crypto currencies or buy it with credit cards."  And the kicker - showing the direct analogy to CDS:

"Futures contracts, a traditional way to make a bet with even more bang for the buck, also took off. In fact, researchers from the San Francisco Federal Reserve believe it is no coincidence that bitcoin peaked the day the Chicago Mercantile Exchange listed contracts on it. Futures finally gave skeptics a way to bet on its decline."

In the case of the CDS realm, side bets were allowed on all sorts of things, such as whether particular collateralized debt obligations (CDOs)  would lose money, or the interest rate (average) on a segment of them would drop one half percent, or whether there would be at least 100,000 foreclosures in the third quarter of the financial year. In the case of the credit default swap, all that was needed to make the bet formal was a counter-party. Thus, the “party” renders the bet and the amount wagered, and the counter-party takes the bet. The actual exchange, as already noted, was often done on cell phones and no formal records other than what the cell phone statement showed were available.  It is fair to say that for both Bitcoin and CDS leverage  helped drive the respective bubbles into danger territory.

Even more basic in the case of bitcoin, it is the currency of choice for hackers as well as nefarious transactions of all sort on the dark web. As Janice put it yesterday when I aleted her to eh $160b lost by investors: "They deserve to lose that money if they're dabbling in a currency that supports and enables criminals!"  Ouch!

The earlier (December) WSJ piece however warns "Bitcoin skeptics need to remember that early froth doesn't necessarily mean an asset is flawed."   Maybe not, but too much investment in an asset that indeed is the preferred choice of n'er do wells, can indeed render it toxic - maybe even as much as the CDS became financially toxic -even requiring the Fed to implement TARP (the Toxic Asset Relief Program).

The good news is that the SEC has finally cracked down the past year on what are called "initial coin offerings" - a method of financing cryptocurrency ventures.  SEC regulators cited in the Weekend WSJ (Exchange,  by Anthony DeBarros) have stated many ICOs were "fraudulent" while most "failed to comply with rules that require investors be given audited financial statements and detailed risk disclosures".

Pardon me, but these lapses, failures remind me too much of how the main credit agencies, i.e. AIG, Standard & Poor's, didn't do their due diligence before allowing the toxic CDS assets into all manner of bonds and rating them AAA.  In each case,  Bitcoin and CDS, a lack of transparency contributed to the attendant financial woes and the resulting harm. At least now there is a chance to catch the Bitcoin bubble before it gets out of hand.  As on WSJ author (Spencer Jakab)  put it:

"Clearly, bursting bubbles doesn't inoculate us against falling for another one."

Evidently, neither does having the old saw "If something sounds too good to be true it probably is" drilled into your head a million times.

Posted by Copernicus at 6:19 AM