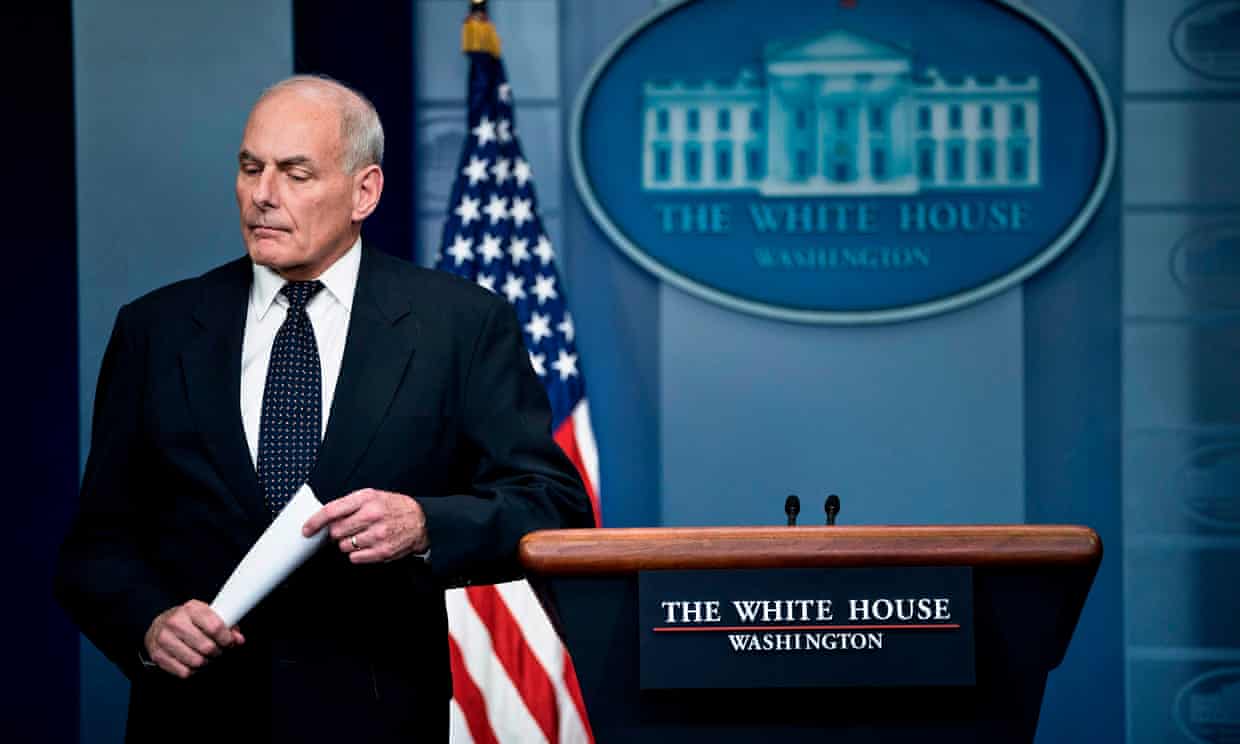 And the degenerate Kelly was so busy defending.


I once upon a time had respect for Gen. John Kelly, like I did for H.R. McMaster. I believed each could truly step into the role of adult in the White House day care center, and bring a measure of control and sanity.  But it appears - as in the case of McMaster, e.g.

I was flat wrong.

Kelly is just another subservient tool, aka a bitch. McMaster became just a puppet by virtue of his twisting facts and attacking the media. Kelly, however, became a supine bitch for not only disrespecting the widow of a slaughtered vet - but referring to an African-American congresswoman (Fredericka Wilson) as an "empty barrel".  A term, as Lawrence O'Donnell noted, which would have been the least objectionable epithet used in Kelly's White Boston neighborhood. (Desegregation came late to Boston schools, long after Kelly finished high school.)

Let's bear in mind Ms. Wilson was not alone in her interpretation of the controversial phone call in which Trump told LaDavid Johnson’s  widow that "he knew what he signed up for". This from a punk who dodged service using every excuse known to humans. Johnson's mother also took issue with Trump’s tone, telling reporters on Wednesday: “President Trump did disrespect my son and my daughter and also me and my husband.”

On this basis, and Kelly lost all credibility  with his sad and sorry high horse moralizing to try to save a turd embodying moral turpitude.  And if Kelly's the only thing between Dotard and activating  the nuclear football we all have much to fear.

Breaking years of silence over the death of his own son in Afghanistan, Kelly said he was “broken-hearted” by the politicization of troops who died on the battlefield.  Seeming to forget that Dotard initiated the politicization earlier in the week by claiming that no previous presidents had made calls of condolence.  Kelly went on to babble:

“It stuns me that a member of Congress would have listened in on that conversation, absolutely stuns me,”

No  remote inkling by this dumb Trump clone that Ms. Wilson was not eavesdropping behind a door, but in a car when a car phone speaker sounded Dotard's voice. What was she supposed to do, you holier than thou prick? Put her hands to her ears?

He then went on to whine like the bitch he is, because anyone who'd grovel for Dotard IS a bitch,

“I thought at least that was sacred … but it [was] eroded a great deal yesterday by the selfish behavior of a member of Congress.”

Selfish behavior? You mean like YOU putting the rapacious interests and ego of Dotard above the interests of the nation?   You ought to be fucking ashamed and as Lawrence O'Donnell stated tonight: "It stuns me that Kelly could so callously echo the worst parts of the culture." As O'Donnell elaborated later:

"I was stunned when Kelly dehumanized Fredericka Wilson and refused to even give her the dignity of a name, calling her an empty barrel. He went out of his way to do it."

One way of looking at that, given his Boston background, is that if he'd had his own wish he'd have maybe used the N  -word. Who knows? The level of disrespect and dehumanization was essentially the  same.

Kelly proved what a useless tool he is when he failed to even acknowledge that this week’s furor began when Dotard himself launched an unprompted attack on his predecessors Barack Obama and George W Bush over their (claimed)  lack of outreach to bereaved military families.

He went on to offer a protracted justification for what he said was Trump’s attempt to offer his condolences to LaDavid Johnson’s wife, Myeshia. Kelly said there was “no perfect way to make that phone call”.  Note that Kelly never once denied that Dotard said what Ms. Wilson claimed, i.e. 'he knew what he was signing up for."

And while there may not be "perfect" ways of expressing sympathy to a grieving military widow there are definite bounds of propriety and these demand at least two attributes: 1) you  do NOT refer to the deceased as "your guy", and 2) You never,  EVER say "he knew what he signed up for."

Doubling down,  Kelly said "He knew what he was getting into by joining that 1% [who serve in uniform],He knew what the possibilities were, because we’re at war.”

Yeah, Kelly, Johnson knew that but you do not tell a grieving widow that, for god's sakes. What kind of mutt are you, a mutt like Dotard?

The most mind boggling part of Kelly's incoherent rant? Describing Trump as “brave” for making the call. This about the most cowardly, dishonorable and degenerate president in history.  After hearing this one was left with only two judgment choices of Kelly: either he's a fucking dumbass moron or he is Dotard's bitch. Since I do not believe the first, I have to go with the second.

What Kelly proved today is that the amoral atmosphere of the White House is corrosive and its rot threatens and wears on anyone in that  environment. As one commentator put it:

"The fact the chief of staff went out and confirmed that the president has lied has been lost as far as I can see."

Indeed, and recall Trump said the congresswoman's words were "totally fabricated" while Kelly said "that's  just the way he talks". (Transl. He's a dumb shit what would you expect?)  In a way then he confirmed Trump's dishonesty and added a layer of his own. This was by focusing his moral wrath on Fredericka Wilson, in particular suggesting Wilson was intruding on the conversation between Trump and the Johnson family when Wilson had been invited by Johnson's widow to be in the car.

One generous take has been that Kelly went out to try to be a "good soldier" today. In that case, it's a pity he's actually come off as Trump's bitch.

A "good soldier" by contrast would have marched Dotard's sorry ass out to deliver an apology to Johnson's mother, his widow and Fredericka Wilson. A "good soldier" Kelly isn't, though many in the lamebrain mainstream media - like John Dickerson on CBS News last night - will try to spin it that way. Or bring up the terrible divisions of the country again but never mentioning their source: DOTARD TRUMP!!