Can We Puh-leeze Have a Break from Fundie Idiocy? 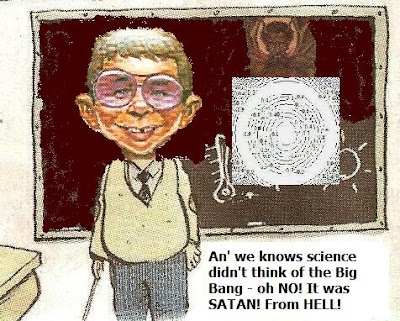 I mean, really? Is that asking too much? After posting extensively – including cited peer-reviewed papers as to exactly how the cosmos began with spontaneous inception – must the fundies continue to parade their ignorance, about things they don’t know? One wonders what menial IQ can’t process the fact that if something at least can be shown to have a quantitative basis in physics, it more likely has an evidentiary basis too. A perfect example is the positive electron or positron, which Paul Dirac postulated from theory in a 1928 paper, and then again in 1929. Everyone believed him insane, 'A POSITIVE electron with negative energy ?’ when everyone KNEW all electrons were negative! Until the positron was discovered by Carl D. Anderson in 1932 (for which he won the 1936 Nobel Physics Prize).

Yet the fundies and their derelict, pygmy -sized brains never cease attempting to impute that "atheists" (actually, quantum cosmologists - but they're too dense to process the difference- especially as most atheists hold no position one way or the other on the cosmos' origin) are either mad or suffer from dementia- despite the fact they (fundies) haven’t mathematically shown the converse.

We behold then the usual clueless buffoonery masquerading as blogging:

“Brothers and Sisters ; I can sometimes just picture in my mind the field day that Satan must be having with the atheists' brain by planting in it the notion that out of absolute nothingness came a "BANG," and all of a sudden the universe came into existence . But , then , where did this "BANG" come from ? And , as if that weren't enough for Satan , he THEN , convinced these poor lost souls to believe that we humans , "evolved" from King Kong ! Oh well , stupid is as stupid does , huh ?”

Actually, stupid is also as stupid writes, when it hasn’t DONE anything to support its own case. And when it has been provided with the basis to see WHY quantum cosmologists – not “atheists” – embrace spontaneous inception (since most atheists - who aren't physicists- don't believe any true, physical theory origin of the cosmos dilutes their unbelief position. They only know a supernatural agent wasn't responsible, just as they know that millions of ghosts don't move the planets in their orbits). But what can we expect from those who are so deplorably deficient in basic biology their only recourse it to offer pathetic, irrelevant jokes about “evolving from King Kong”. Yuck, yuck but the joke’s on you., Alfred E. Newman- TWO.

Does this officious commentator understand one tiny nugget about conformal space time? About dark – vacuum energy? About the equation of state that applies to it? Does he know what a stationary state is? What about Hermite polynomials (H_n (q)) for solutions to the harmonic oscillator- on which the action of the dark energy bubble is based? Can this bozo even distinguish singular from non-singular space-times? Well, uh…no, because he’s never even taken a basic high school physics course, far less cosmology 101 – yet he purports or claims to pontificate in some way about the Big Bang! (Of course, interjecting a superstitious piece of rot like “Satan” shows he’s capitulated before he begins, since anyone compelled to invoke such backward, mythical gibberish obviously has no business commenting on the Big Bang, far less evolution. Rather, he or she has basically admitted to pathological loss of mental ability and rationality and a need to be strapped into a straightjacket and administered ECT on the hour, along with appropriate doses of lithium to assuage the internal brain delirium.)

Oh and then he purports to “get serious”:

“OK , I'll get serious now .After reviewing the evidence that the cosmos had a beginning , physicist Edmund Whittaker concluded : "It is simpler to postulate creation ex nihilo - divine will constituting nature from nothingness" ( cited in Jastrow , "A Scientist Caught," 111 ) . Even Jastrow , a confirmed agnostic , said "That there are what I or anyone would call supernatural forces at work is now , I think , a scientifically proven fact" ( God and the Astronomers”)

And this malarkey is supposed to convince us he’s right and trump the (actually) serious Physical Review D paper (‘Universe Before Planck Time – A Quantum Gravity Model', in Vol. 28, No. 4, p. 756.) of T. Padmanbhan? Surely he jests, but what can we expect of a court…..er blog….jester? He isn’t even clever enough to grasp Jastrow was never an agnostic and - as I reviewed his book more than two decades ago- I pointed this out then, noting he was a religionist and supernaturalist masquerading as a scientist and pseudo-agnostic. Bringing water to the well of mentally -deformed religiosity to (hopefully) collect a few more coins in royalties as a resurgence of religious dopeyness flooded the nation during the Ray-gun years. (At the instigation of clowns like Jim & Tammy Baker, Jimmy Swaggart, and Jerry Falwell ...not to mention Pat Robertson).

Oh, and then there’s the choice move of citing Whittaker, who died in March, 1956- nearly a DECADE before the background microwave radiation of the Big Bang was discovered in 1965 by Arno Penzias and Robert Wilson (who actually won a Nobel Prize in Physics, unlike Whittaker). Obviously then, even the most ill-informed, educationally challenged observer would realize that Whittaker wouldn’t have been aware of a single scintilla of physical evidence for the Big Bang, such as the isotropic black body radiation curve at 2.7 K, so wouldn’t have grasped anything – or been able to comment intelligently on it. It would have been better for this fundie to have cited a typing monkey.

Yet this is what passes for perceptive insight ….at least on this particular blog. (One hopes there aren't too many clones, but who knows? As Isaac Asimov once pointed out, stupidity and ignorance always propagate faster than facts.)

Far from any “embarrassing words” Jastrow may have for serious scientists, (who basically began ignoring all his work after his book came out) this fundie’s clown blog site is a monumental embarrassment to him as well as his clueless followers.

Rather than embarrass himself even more, disclosing he’s a confirmed dolt (right now it's still borderline), he’d do better to close shop on any issue pertaining to advanced scientific discourse like physics, cosmology and astrophysics (at least until he learns how to write the equation of state for dark energy, i.e. w = (Pressure/ energy density) = -1 ) and stick to more prosaic items he claims to know about, like the “reality” of Hell (though he’s never been able to disprove the Hell—Infinite = God paradox. More on this later).

But hey, one thing we can be sure of, he will never fail to entertain us with more malarkey and unintentional comic bilge that really belongs in a MAD magazine, not on a blog claiming to discuss serious topics.
Posted by Copernicus at 8:37 AM

"he’d do better to close shop on any issue pertaining to advanced scientific discourse like physics, cosmology and astrophysics"


Totally agree! I mean where do these people get off thinking they can just write any old junk about the Big bang when they'v never even taken basic physics courses? It's a joke!

Do you think I could set up a blog and write stupid junk about the "evil" of organ transplant operations, not knowing anything about biology? Or I could write some blog attacking quants and credit derivatives in financial markets when I've never even taken econ 101?

Heck no! And it's equally dumb for them to be writing about the Big Bang, especially to criticize it, when they've not even in any position to understand it.

They really do deserve to be clobbered like you have done to them here, when they audaciously step outside the limits of their knowledge and aptitude. Which I suspect is extremely limited indeed!