In a recent interview with BBC's Science Focus magazine,  Simon Conway Morris - an evolutionary palaeobiologist at the institution's Department of Earth Sciences - declared that researchers can "say with reasonable confidence" that human-like evolution has occurred in other locations around the Universe.  The core of Morris' belief comes from the theory of convergent evolution. It claims that life will repeatedly evolve in different ways due to similar pressures or starting points.

According to Encyclopedia.com: "Convergent evolution is the process by which unrelated species independently evolve similar traits due to having to adapt to similar environments or ecological niches."

We can all agree that this mechanism has played an essential role in shaping the Earth's biodiversity but Conway Morris insists it can also lead lead to intelligent alien life (but like human, or human-like)  on other planets!

Of course, this is total nonsense, the reasons for which I will get to below.

For now let's note that convergent evolution has only been observed on Earth, for obvious reasons. It is a response to evolutionary pressure, the need of an organism to survive. This may occur under conditions similar across different species (such as living in certain climates), or it can be driven by unique factors depending on what type of life form.

But Conway Morris goes even further and claims that scientists can say with "reasonable confidence" that human-like creatures have evolved outside our solar system.  He bases this on "decades spent studying the theory of convergent evolution."   But studying a theory is not proof that it applies everywhere. We are not talking here of a biological cosmological principle after all.

According to one science writer on the same topic:

"Suppose you think of the entire Universe as one enormous ecosystem. The Universe is a prominent place so that some aliens will have brains and bodies resembling humans. Don't you think?"

No,  I don't think any aliens will have "human" like brains or bodies and here's why. On Earth biological evolution for humans is an algorithmic process, e.g. 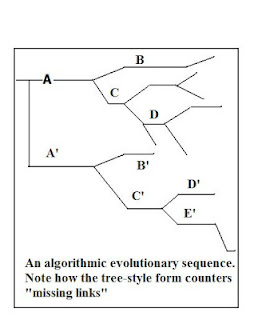 The top diagram displays a realistic algorithmic development of two hominid families, called A and A' - initially. Note here the primary differentiating characteristic is not a uniform linking in a linear sequence, but rather a TREE-like branching. The tree-like branching fits the evidence we have that while a 'shoot' of the evolutionary lineage starts off, it often quickly hits a dead end, then stops. Others continue to develop before they branch off...or don't. 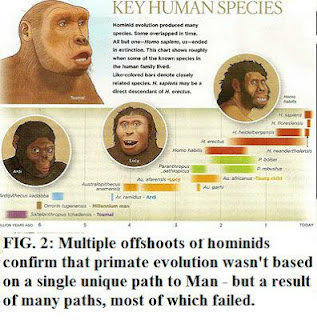 Meanwhile, each specific algorithmic hominid offshoot in Fig. 2 was evolved dependent on the ecology and environmental conditions at that time, as well as atmosphere, climate etc.

Just look at the most elemental level of the human genome which is also packed with up to 8 percent of virus DNA, as recent research has shown, e.g.

Ancient Viruses Are Buried in Your DNA - The New York Times (nytimes.com)

These ancient viruses for sure will be found on no other planet because no other planet will have the exact same conditions for them to have originated.  (Or at least the probability of doing so will be next to zero.)  Hence, we can reckon that proportion of the genome will not be replicated. We can, indeed, trace that back to the origin of life on Earth in abiogenesis, e.g.

There is also little doubt the Krebs cycle  (for aerobic metabolism) referenced above, i.e.

Cannot be replicated on any other worlds for the simple reason that the assorted coenzyme (A) needed to make it work will not be found in any reactions on those worlds, again  because the primitive atmospheric, ecological conditions would not have been the same.

Even assuming life on any other world arises, how will it adapt to its conditions?  Plant-like aliens are unlikely because photosynthesis doesn't encourage complex survival strategies. The need to pursue diverse food sources favors mobile life. If such life evolved in a thick atmosphere, it's likely to be a horizontal creature. A thinner atmosphere would favor the most vertical animals.

Go on then to the g-force present on a given planet. The size and shape of the hypothetical  alien would be determined by gravity, ambient density, and source of energy (spectral type for central star or sun). While two legs and two arms are more efficient than four legs (or no legs)  say for terrestrial advanced organisms,  a blob--like physique - analogous to a giant amoeba -  might adapt better to a high g world. So  appear nothing like a human. If the creature was also silicon-based and not carbon -based, the differences would be even more dramatic and be more like a giant 'rock'.

But to be more or less exactly like a human in appearance would again assume - at each algorithmic step on the alien planet - an adaptation was made by that emerging life form that matched the algorithmic step on our Earth.  Primitive hominids on Earth grew opposable thumbs so they could better grasp objects. Monkeys developed prehensile tails for the same reason. All our ape cousins and ourselves have eyes tuned to the visible end of the electromagnetic spectrum.

But these sets of  consecutive adaptations are simply not that likely given the differences in conditions on different worlds, say for the assay found so far on those discovered by the Kepler  telescope, e.g..

If life had occurred on a completely different world, with different temperatures, gravity and topography then it is a no brainer that flora and fauna must have evolved differently- whether plant. fish, amphibian, reptile or mammal. And if that other world had a completely different chemical composition, so would any higher life, assuming it was even possible to extend the algorithmic processes that far - as seen in Fig. 2. All life on Earth is carbon-based, but that wouldn't be the case elsewhere. Life forms could be silicon-based or iron-based or anything else at all.

A further thought:  consider that 95 percent of the universe (mainly as dark matter, dark energy) is not perceptible by our senses or technology then it's most likely that's where the actual aliens are-  and explains why we haven't found any meeting our demands for existence yet.

The main problem we have in regard to  processing (or searching for)  alien life is that our assumptions -  like those of Conway Morris - are way too anthropomorphic. Thus, a physicist like Michio Kaku could - in an appearance on CBS Morning some 5 moths ago-   essentially dismiss actual aliens piloting the UFOs reported by military pilots, e.g.

because the "dramatic changes in acceleration would have been too much to survive".    But Prof. Kaku makes such assertions precisely because he is assuming human-like aliens with the exact same biological peculiarities and limits as terrestrial humans.

I just think this is a huge error, for him as well as Conway Morris - to assume any  human biological or biochemical aspects -  in putative  "thought experiments" concerning extraterrestrial life.

Posted by Copernicus at 7:31 AM