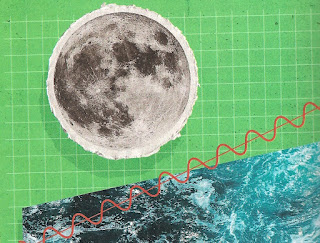 The next round of climate change in the next decade will be unlike anything humans have experienced hitherto.  From even longer heat waves to violent storms (think hundreds of F5 tornadoes) to drenching "rivers" from the sky owing to massive flooding - making current floods appear almost benign.  The cause?  Tidal forces that affect the Moon's orbital oscillations which are naturally tied to what we term forced physical libration.  The latter term is tied to discrete motions of the Moon in all three coordinate axes (x, y and z)

Six months ago, NASA published a new study in the journal Nature Climate Change that found rising sea levels plus higher tides caused by an oscillation in the moon's orbit  (related to forced physical libration) will dramatically increase the number of sunny day floods experienced in U.S. coastal communities.  Here's the gist of it: The regular oscillation in the lunar orbit — what researchers have dubbed a “moon wobble”  (libration)  — will temporarily suppress flooding from rising sea levels this decade, only to worsen across multiple susceptible in the mid-2030s as the moon sways back.

Basically, this oscillating orbit of the Moon acts as a tide-altering phenomenon.  With normal everyday tides, as shown in the diagram below, the Moon's pull on Earth causes the surface water to bulge on two sides. 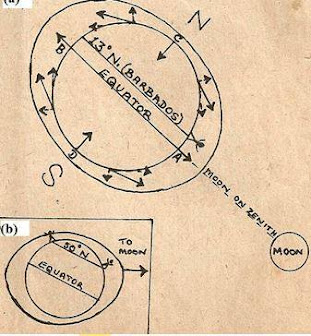 This is an effect of what we call differential gravitational attraction.  To fix ideas, we  confine attention here to one single alignment of opposite sides of Earth (through its center) with the Moon. It is not too difficult to see that when the Moon  exerts a pull with force F1 on the near point (call it A on the lower right side of Earth), another tide arises at point B on the opposite side from A.  Why?   Well, as illustrated - the water at A would be pulled nearer to the Moon than the water above it, thereby inducing a high tide at point B as well. (B pulled more the the Moon than the water above it).   Now, if you look closely you will see the tidal forces approaching  the positions A, B resolved into two vector components: one vertical the other horizontal.  It is important to understand it is the horizontal components of the tidal forces that produce the tidal bulges in the oceans.

At the two points on the Earth where the Moon is at the zenith (A) and nadir (B), the tidal forces are exactly radial.  I.e. directed away from the Earth's center. At those two points the horizontal components are zero and there is no acceleration causing the water to flow along the surface of the Earth.  The tidal bulges in the oceans then do not result from the Moon 'lifting' water away from the Earth, rather they result in an actual flow over the Earth's surface (i..e. toward the regions below and opposite the Moon).

What's the big deal here?  The bulges ("protuberances" ) generated - which can span as much as 55 feet across - march around the Earth as it rotates, creating a rise and fall pattern in water levels.  But the Moon's orbit also wobbles by about 10 degrees while orbiting Earth.   This movement follows an 18.6 year cycle.  For half the cycle the wobble shrinks the difference between high and low tide, and for the other half the converse holds.  I.e. the latter half cycle amplifies the tides - meaning high tides are  higher and low tides, lower.   What we find with computation is by the 2030s the half cycle of tidal suppression will head into amplification.  But at this point of tidal amplification climate change will also be intensifying with many more severe flooding events.  In other words, the tidal forces of physical libration will make the climate change floods much much worse.

The fact that the moon wobbles is not a new discovery. Astronomers have known about such lunar oscillations for centuries.  In the words of one NASA release:

“There’s nothing new or dangerous about the wobble; it was first reported in 1728.  What’s new is how one of the wobble’s effects on the moon’s gravitational pull — the main cause of Earth’s tides — will combine with rising sea levels resulting from the planet’s warming.”

Climate scientists worry that as the tides amplify in the next decade, vulnerable cities around the world will see more flooding. The San Francisco Bay alone has risen by about eight inches since 1990, the Mercury News reported.  But by the midcentury that could increase by up to 1.9 feet, before accelerating even more towards the end of the century.

“If it floods 10 or 15 times a month, a business can’t keep operating with its parking lot under water,”

The real doozy in the parlance of one co-author,  is that a certain level of sea rise is already baked in, and will surge as the temperatures rise and oceans warm. San Francisco could see 31 additional flooding days per year on average during the 2030s.

Those in vulnerable cities, like Miami, Amsterdam and San Francisco, may not have been aware of this additional lunar effect on flooding, but they need to be now.  And make whatever preparations are needed in order to survive the monstrous tidal floods by 2036..

Posted by Copernicus at 9:47 AM