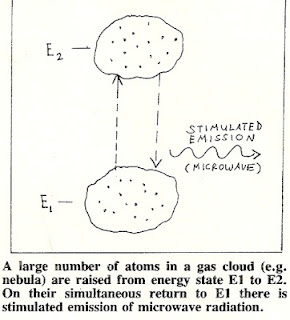 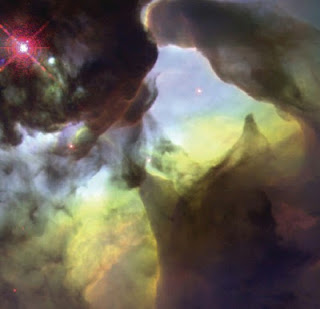 A cosmic maser in the Orion Nebula.
Cosmic Masers are amongst the more esoteric objects one confronts in astrophysics and in this blog I introduce them. The actual objects take their name from the device (maser) used in applied physics. The word itself is a contracted form derived from: Microwave Amplification by Stimulated Emission of Radiation. This is completely analogous to the word laser, which is arrived at by merely substituting 'Light' for 'Microwave above.

Maser action is one of three fundamental ways in which electromagnetic radiation can interact with matter, the other two being absorption and spontaneous emission. In talking about these, we understand that a discrete wave packet of energy (defined by E = hf, for the photon, where h is Planck's constant, and f the frequency of the radiation) is associated with the transmission of electromagnetic (EM) radiation.

With absorption an atom, say hydrogen, absorbs a photon causing the atom to become "excited" - that is to reach a higher energy state. What happens is that its sole electron jumps to a higher  energy level accessible to the atom, with the difference in energy levels equal to the quantum absorbed, or hf. More specifically, if E1 was the original energy level and E2 the final, the energy is: (E2 - E1) = h(f2 - f1), where the frequencies are applicable to the respective levels, and in this case one requires: (f2 - f1) = f. 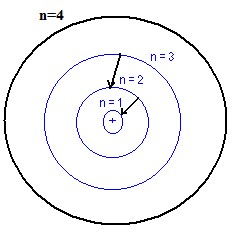 Energy transitions in Hydrogen atomSpontaneous emission occurs when the excited atom's electron loses energy - say in going the reverse direction, to a lower energy level- so: (E2 - E1) = h(f2 - f1) = -DE, where that energy comes off as an emitted photon of energy quantum (DE) = h(f2 - f1) = hf.
Meanwhile, in stimulated emission, we have the situation in which an atom already in a higher energy state absorbs a photon. This results in the atom returning to a lower energy state and emitting two photons of the same energy in the process. Thus, think of atom A with energy level E2 and absorbing another photon (size hf) which then puts it at temporary energy state E3- which instantly emits energy: hf + hf = 2hf. Here, emission is stimulated by the absorbed photon and we get two photons back though the total energy is still conserved (since the amount that went in is equal to the amount released - with the original higher energy level electron (E2) returning to ground level E1.)A "maser", cosmic or otherwise, works by amplifying the stimulated emission, which is preferentially microwave in nature (microwave being longer wavelength EM radiation past the red visual spectrum). In effect, maser action raises a vast number of atoms (e.g. in a gas) all to the same higher energy level, then stimulating them by appropriate means to cascade simultaneously to a lower energy state. This is illustrated schematically in the accompanying diagram. (Obviously, to keep the process going we also need a "pumping mechanism" that can ensure continued stimulation).The original astronomical maser example hearkens back to 1963 when the hydroxyl radical (OH-) became the first molecule to be detected in space. This was accomplished by means of a radio telescope which picked up an absorption signal at 1,667 MHz (megacycles per second or 10 6 /s) from a location in the constellation Cassiopeia. This find then triggered a widespread search for other hydroxy absorption signals in space.
In 1965, a team of radio astronomers in California, while training their instrument on the Orion Nebula picked up another signal emanating from hydroxy molecules- but it was an emission signla, not absorption. Also, it was at a frequency of 1,665 MHz not 1,667 MHz. Baffled by this apparently confounding observation, the team tried to bs their way out by postulating a hitherto unknown kind of substance "mysterium" - presumed responsible for the new signal.Only later, when the observations of other perplexing signals arrived from elsewhere in the sky, were astronomers led to the maser hypothesis. This became a fact when quantitative analysis showed that the temperature associated with the radio emission lines could only be explained by a maser process.Following discovery of other hydroxy masers, the first molecular maser stars were found. One subset includes all the Red Giant variables like Mira in the constellation Cetus, characterized by an excess of infrared radiation. That is, we detect more infrared than would otherwise be expected from looking at the visible spectrum. The only explanation is that like the Orion hydroxy cloud, these variable stars must be subject to a maser process.This was confirmed by the frequencies detected (infrared-microwave) and the point-like radio emission typically associated with masers. The stellar frequencies found were mainly: 1,612 MHz (hydroxy maser); 43, 112 MHz and 86, 243 MHz (silicon monoxide maser) and w2, 235 MHz (water maser).The sad aspect is that despite nearly four decades of maser investigation, the general public knows next to nothing about astronomical masers. The most plausible explanation, again, is that the scientific reporting media simply leaves them out because it is believed the underlying physics is too difficult for laymen to process.
See Also:
And:
Brane Space: Solutions To Stellar Emission & Absorption Revisited Problems (2) (brane-space.blogspot.com)
Posted by Copernicus at 10:57 AM