Books Are Targeted As "More Dangerous" Than Bullets -- Has Texas (And The Nation) Gone Totally Mad? 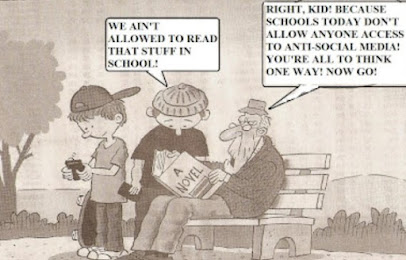 "Books are burning, both literally and figuratively. Novelists are finding themselves under attack....Schools, for their part, are ridding themselves of literary classics that contain a single deplorable word."  - Meghan Cox Gordon,  WSJ, Dec. 18-19, p. C11

Most normally functioning citizens of at least average intelligence, and sensibility recognize  - or should - that bullets are vastly more lethal than books. But evidently not in the backward red state of Texas. As reported in the NY Times, after TX librarian Carrie Damon - a middle school librarian - celebrated 'Banned Books Week' as an ironic free speech event, it wasn't long before Rightist blowback arrived.

This came via Reepo state Rep. Matt Krause, who then emailed a list of 850 books to school superintendents.  The books, included a mix of half century old novels (e.g. Catcher in the Rye) as well as works by Margaret Atwood (e.g. 'The Handmaid's Tale') and Ta -Nehesi Coates. Clearly seeking to stoke actual banning (and in some cases burning) of the offending books, Krause asked in his email: "Are these the works you want on your library shelves?"

As if this dolt's motives were initially unclear, the next night they were confirmed at a school board meeting in San Antonio. There unhinged parents accused a librarian of "poisoning" their children's minds.  Of course, none of this is new, it's been ongoing in the "land of the free" for many decades.  Most good novels, let's admit, do force readers to question their  naive beliefs and assumptions as well as the moral codes they're basing their lives on.  For some this is simply too much and in Krause's case he fretted about the books causing "anguish, guilt and making kids feel discomfort".  The edict is: "Don't dare disturb the neurons in my brain or my kid's! I don't wanna think!"  Fair enough, but does that mean you get to impose your misaligned will on everyone else?

What irks me to the nth degree is how Texas has now gone so reactionary that one curriculum official actually went so far as to suggest teachers "should seek opposing perspectives" in their classes and reading materials, including to do with the holocaust. (This according to  recording obtained by NBC). Well, sorry, Roscoe, there are not two sides to the holocaust, only one.  The truth that up to 6 million Jews were slaughtered in Hitler's gas chambers. Deal with it!

While most of the banning naturally happens in high schools - but many of the books banned in past years are college texts, especially in sociology, or economics where some fret that "liberal" or "socialistic" notions may poison the weak little minds of their darlings. Well, whatever the hell happened to critical thinking, assessing a topic or ideology for oneself, and then rejecting it or studying it further? Looks like that has gone by the backboards, because:

1) Too many parents feel they have a god-given right to meddle in all of their charges' doings, books, courses, even thoughts, and

2) The religious crazies feel they must keep a tight lid on free thought, else "corruption" may spread across the land and scuttle their plans to brainwash their progeny into believing and living like they do.

Of course the bulk of these parochial, persecutorial reactions can be explained by plain old American anti-intellectualism which - sad to say- has a long and storied history in this country. Even the power brokers and so-called Overclass contain elements that distrust a person "too smart for his own breeches" - and many of those who invest plenty of time in books, or are seen tugging them around and actually reading them are often dismissed as "oddballs" .

Author Richard Hofstadter in his terrific work,  Anti-Intellectualism in American Life puts his finger (p. 133) on:

"Such a thing as the generically-prejudiced mind. Studies of political tolerance and ethnic prejudice have shown that zealous church-going and rigid religious faith are among the most important correlates of political and ethnic animosity."

"The fundamentalist mind will have nothing to do with all this: it is essentially Manichean, it looks upon the world as an arena for conflict between absolute good and absolute evil, and accordingly it scorns compromises (who would compromise with Satan) and can tolerate no ambiguities."

What this tells us also, is that the typical repressive Rightist (who is also often a religious bigot and anti-intellectual Jasper)  will wage war against ANY idea with which he isn't 100% comfortable.  As the inanity of book banning in Texas shows, this covers a lot of books, 850 at last count, at least submitted by Texas Rep Krause.  I have broken down 100 of the most pilloried into three sub groups below: based on a flyer received for an anti-censorship group: 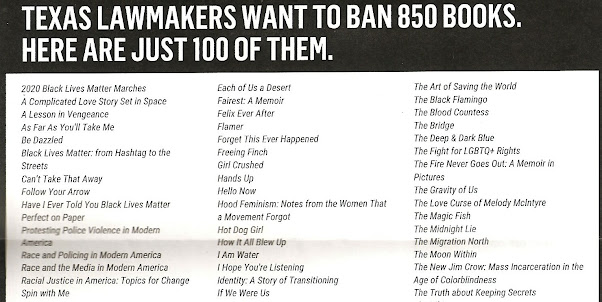 Look, Texas banning 850 books shouldn't sound astounding.  Given an aversion to ambiguity or moral relativism or just racism - then logically, more books will be found to condemn than accept.  Generally too, the smaller the mind or I.Q. the more eager to ban or burn.  Books are feared precisely because they can make a mental imprint and engender a change in thinking. Since most Americans already distrust thinking  - and find it too difficult themselves- they will persecute those who love to think - and read. Especially outside the lines and restrictive boxes. (Like when I read 'The Communist Manifesto' in high school.)

But if reactionaries ban everything that makes people feel "uncomfortable"  that'll include about 99% of all books - except those which aren't extensions of bibles -  oh, or written by those gunning for "atheistic" evolution, the Big Bang theorists, or provisional moralists (say, like Aristotle in his Nichomachean Ethics). That the Christian evangelical reactionary emerges as the natural book banner should surprise no one. That this mind virus would infect so much of the country ought to terrify everyone.

Conservatives seeking to ban books instead of bullets | Miami Herald

Posted by Copernicus at 7:17 AM