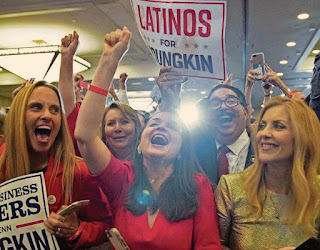 Virginia female swing voters celebrate. How happy will they be when they lose their abortion rights?

Youngkin is a clever, corporate Reepo schmoozer who believes his low key Trumpism and playing righteous, cool conservative dude to Virginia's voters will: a) get the Dem voters to stay home, bored and unmotivated, and b) rile up just enough Trumpies to get him into the state house...to wreak  havoc

Well, that came to pass last night, much to our chagrin and disgust.  We had hoped that Virginia's voters - at least the Independents - would finally see the light and they were being played by a lying, no count 'aw shucks' schmoozer Trump lover.  Played using the ridiculous parent card where this maggot kept repeating bollocks about critical race theory being taught in Virginia schools.  The asswad was even caught out on this whopper by 'The Circus' Alex Wagner - when he admitted there were no actual CRT classes, only a "philosophy".   As I wrote in the earlier post:

A philosophy? WTF is that?  Jeezus, you're going to buffalo 1 million Virginians to vote you in on a "philosophy' that's not even actually taught? You got them all hair on fire crazy for that?   But Youngkin believes he can pull it off and we will see in a week.

Well, we saw, sadly!  Trump's man (he endorsed him 11 times including the night before the election) got in and the Dotard has to be as happy as a pig wallowing in shit.  Of course, the hyper media will blow this loss out of all proportion as some kind of major setback for Biden and the Dems, and in a way it is.  But it also hews to  a pattern set from back in 1973  - i.e. that in every "off" year following a general election, the candidate of the opposing party wins the Virginia governorship.

But I still maintain it needn't have been that way, given this election was different: it had been perverted by Trump and his insurrection and Big Lie.  In that respect there is no way in hell a Trump clone ought to have been elected anywhere, for any office.  Why? Because any Reep candidate who allied with Trump - even in a stealth form - is as unfit to govern as much as Trump is.   The independent VA suburban voters ought to have seen that but as MSNBC's Chris Jansing noted this a.m. :

"The suburban moms I spoke to yesterday expected more help by now on the economy, on beating back Covid, and education.  They believe Youngkin will do better and he did promise to cut grocery taxes too!"

Please.  How could any normal IQ person believe that rot?  Oh, Youngkin also promised to "pass a law" to abolish critical race theory being taught in Virginia schools.  Never mind it hasn't been taught, it was just a dog whistle to revive the culture wars and rope- a -dope inattentive dummies.  Jansing also said that those voters hold Biden and Dems responsible for the higher price of groceries, failure to end the pandemic, high gas prices etc.  - all of which I noted in an earlier post are not under their control, for god's sake, e.g.

As for the complaint the Dems "have not yet turned the nation back to pre-Covid normalcy"- well, blame the lying MAGA maggots and conspiracy ideationists for their confounded anti-mask and anti-vax wars!   A lot of this is due to the anti-vaxxers on FOX like Tucker Carlson and his pals, prepared to sacrifice Trumpie and red state bodies to the virus for political gain.

Youngkin himself has vowed to "ban all mandates" --including for masks and vaccines.  That means if a new Covid variant emerges - given 64% of parents now say they plan to either wait or never get their 5-11 y/olds the vaccine - we may have another year of pandemic and thousands of dead. In effect,  those who helped elect Youngkin may also be considered accessories after the fact if that happens.  They are no better than Trumpers.

Again, the  suburban voters lacked the smarts or the political insights to see through to the root causes of their angst. Opting instead to conflate all their experienced woes under the Dem umbrella - which also explains the close contest in New Jersey - where Phil Murphy ought to be slaughtering his Reep opponent.

These suburban Virginia voters ought to be especially ashamed that they "united with Trump supporters"  (as The Miami Herald put it) to secure Youngkin's victory.  To me that makes them all accomplices to the MAGA  insurrection brigade, irrespective of their assorted excuses. Bottom line, they ought to have known better and will now repent at their leisure.

But apart from these naive,  suburban swing voters I also put lots of blame on the two conservative (not "moderate")  Dem Divas - Joe Manchin and Kyrsten Sinema.  Had these two clown grandstanders gotten their asses in gear and ceased the games,  two decent infrastructure  bills could have been signed and ready before Biden left for Rome last week.  In that event Dem candidate McAuliffe could have pointed to the two bills as evidence the Dems and Biden can get things done.  They can govern, the Trump Reeptards can't!  (As Virginia's swing voters will now learn.)

But it was not to be.  Sinema remained ensconced in her personal cloud 9 - lost somewhere in her BPD headspace.  Unable to give any firm commitment to the bills - especially the social infrastructure one- and providing no definitive complaints either.  What would anyone expect from a woman detached from reality who fancies herself a "quirky maverick"?

Manchin for his part complained yet again about the social bill and there might be still "too much  money"  and  too many "gimmicks" - forgetting that his own proposals were laden with such.  At the end of the day, as Sen. John Tester pointed out, it just amounted to another Manchin roadblock.

Manchin also lambasted the progressives for taking "hostage" the bipartisan infrastructure bill (at $1 trillion).  But as Rep. Ilhan Omar put it, that bill would have been voted on had Manchin and Sinema already helped pass the social bill.  Clearly, she and other progressives don't trust Manchin to fulfill his end of the deal and I don't trust him either. Nor do I trust Sinema as far as I could throw her.

Biden for his part, en route home from the COP 26 meet in Glasgow, opined that "I believe Joe will come around".  But if he wants these bills passed he will have to lay it on the line with Manchin, not just "believe" he will come through.  At this point, some channeling of that polecat LBJ is called for - i.e. take no prisoners in getting the damned bills passed. Or to put it the way Janice would: "Read Manchin the riot act!"  Failure to do so could well translate to even bigger losses in the midterms next year, and we can't let that happen.  As William Rivers Pitt took Manchin apart in his latest blog post:

"When all is said and done, there’s nothing left to say or do. That’s how I’m feeling abut the descriptive powers of the English language as it pertains to the ongoing one-man hostage crisis known as Joe “Freaking” Manchin. How many new and novel ways are there to say it? THE MAN WANTS TO DESTROY THE BUILD BACK BETTER ACT, period, and he will keep moving the goal posts until he (and his coal-soot paymasters) gets what he wants.

How many times has this snake shed its skin? First it was the money, but then the money came down, so it became about his fear of creating an “entitlement nation.” That was a good one, coming from a senator whose West Virginia home takes in more federal aid for its citizens than any other state except New Mexico."

Manchin needs to be brought in line now, as well as Sinema.  So long as these two numskulls are allowed to remain legends in their own febrile minds - to the detriment of Biden and the Democratic Party - it will be a bleak Trumpkin future indeed. 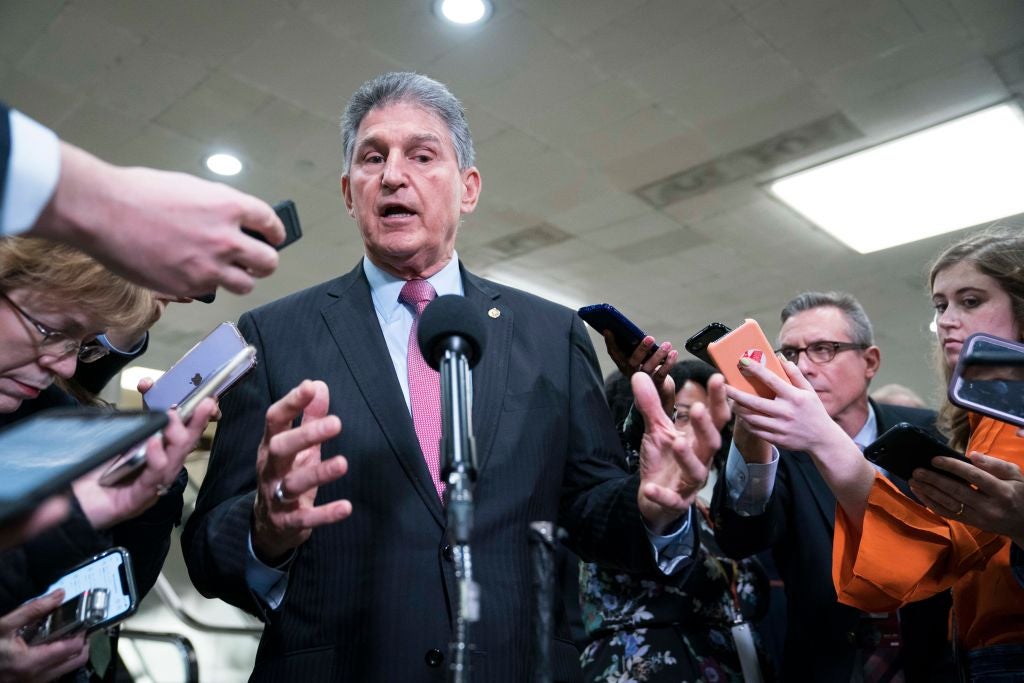 All that work Democrats have been doing all weekend long to get President Joe Biden’s Build Back Better plan onto the House floor? West Virginia Democrat Joe Manchin just blew it all to smithereens, or did his damnedest to do so, anyway. He held a press conference Monday blasting House progressives for refusing to compromise—when they’ve come down from a figure of $6 trillion to $1.75 trillion to answer his concerns—and insisting that he won’t support a BBB bill until it answers whatever made-up bullshit he has a problem with this week. So that we can go through this whole charade again next week.

Manchin’s endgame has been clear for weeks now: Force his colleagues and President Biden to spend time chasing him down for support on Build Back Better, and at the same time force the House to pass his gift to the fossil fuel industry, the hard infrastructure bill (BIB) he negotiated with Republicans. 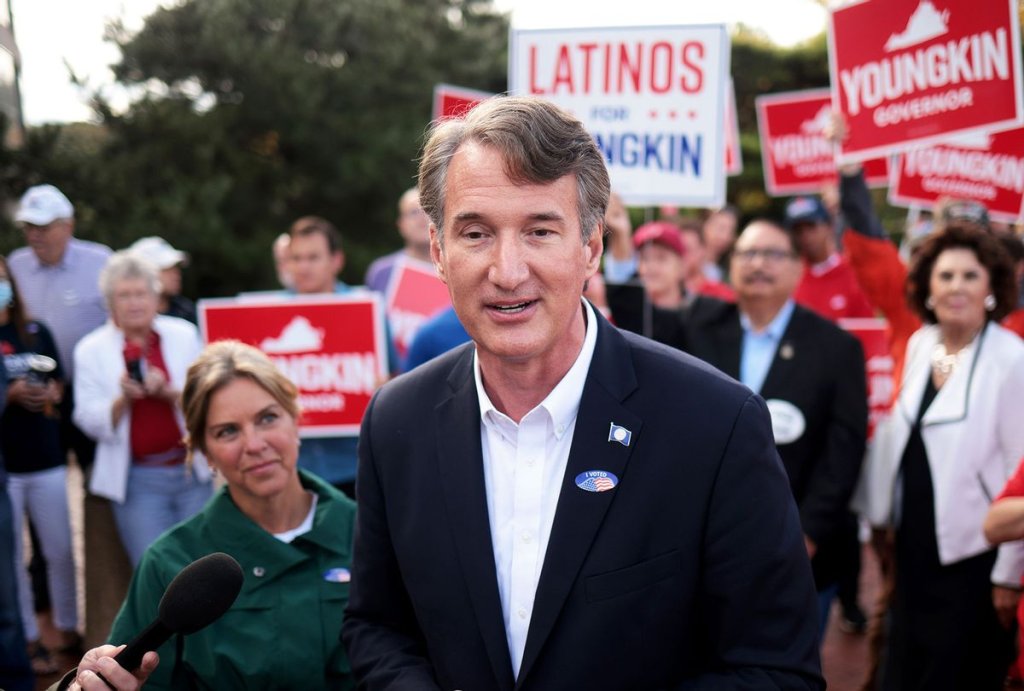 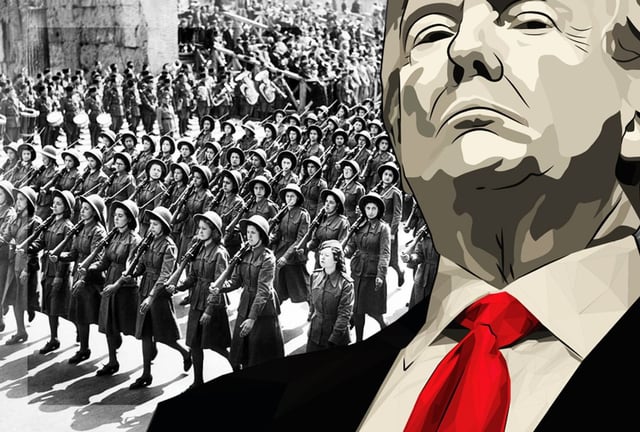