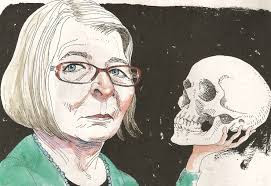 Barbara Ehrenreich is trying to get more Americans to accept death instead of fighting irrationally against terminal diseases
The Financial Times weekend article 'Can We Defeat Death'  continues promotion of the addled fantasy that humans will one day render death "optional."  At the center of it is a Google-based outfit called the California Life Company - with ties to pharma companies as well as Harvard and MIT.   The approach, according to the piece, is focused on "combating neurodegenerative disease and cancer" -  the aim being to "nudge us closer to the theoretical maximum human lifespan".
The ultimate "prize" for these fantasists? Radical life extension "promising lifespans that can unspool over centuries rather than decades."   This being the immediate goal of Altos Labs which apparently has assembled a team of crack scientists to "rage against the dying of the light".  Evidently the FT claims it's also backed by Jeff Bezos and a Russian born billionaire - Yuri Milner.  According to one observer -  Daniel Ives a former Univ. of Cambridge biologist- these rich as Croesus funders already have all they want, the only thing left is to change reality.
Well, pardon me while I laugh.  As I've posted before this is all so much drivel, a colossal waste and fool's errand.    The one thing none of these longevity geniuses have thought about is how they are going to also control the planet's temperatures - even if they manage to re-engineer human biology.   To fix ideas, by 2100 we will see Earth already embedded in the midst of a global runaway warming equilibrium following emergence of a major climate tipping point.   As the latest UN Report noted:
"Crossing the 2°C global warming level in the mid-term period (2041–2060) is very likely to occur under the very high GHG emissions scenario (SSP5-8.5), "

In that SSP5 -8.5 scenario, which we are well on the way to exceeding,  we will see an increase of 5.7 C  by 2100,  which is the level expected by the Bulletin of the Atomic Scientists . It had noted two years ago that IPCC climate report understated the threat.  By logical extension, this current one also does.  Do the math.  If the current rate of CO2 concentration increase is at  2.5  W/ m2  the CO2  the  concentration is increasing at 2.5 ppm/ yr.

If you think the climate hiccups being experienced now - including the constant polar vortex intrusions, floods, heat waves, monster fires, superstorms - are a big deal, stay tuned for the  cusp of the runaway Greenhouse.  You are looking at heat waves lasting 90-120 days with mean temperatures 140-160F.   Not even the richest  silicon  billionaires will have the energy structures to withstand the melting and buckling of metals that will rip their infrastructures to shreds.  And destroy their air conditioning systems, swimming pools, solar collectors.

Living day to day - just to survive the infernal, unrelenting heat and to get enough water and food - will be a monumental struggle for most ordinary folks.  The billionaire crew might fare better for a time - with their advantage in getting more backup systems - but only for a time.  The rest who are living then will frankly wish they weren't as the blistering heat and oceans full of long dead coral reefs will remind them of a planet lost,  to fossil fuels,  human greed and hubris.

So the question again: You really want to live for centuries, or even decades longer than a normal lifespan in that world?  This is the question the radical life extenders haven't answered yet in the context of an unbearably hot planet. Nor will they, because short of setting up shop on another planet, they literally have few options.

One of the deluded knuckleheads (Steve Horvath) quoted in the FT piece, blurted to the author that "All the stars have lined up and humankind is at a historic moment", i.e. to extend life by decades or centuries.  Clearly this bozo hasn't considered how these newly generated Methuselahs  (in a hellhole world) will support themselves  - assuming they don't burn up first .

Again, where would you get the money to support yourself even if you wanted to live so long and possessed the genes needed to enhance the odds?   Most finance folks I know agree those aspiring to such extension need to win at least one lotto, maybe two. Or come into a  $2- 4m inheritance or have rich adult offspring to provide support just to last a few more decades.

Get a job? Where?  Recent reports in the AARP Bulletin and magazine disclose ageism is as rampant as ever - even if a geezer appears to look 30 yrs. younger. (From cosmetic surgery or botox)  The corporations simply don't want an old guy or gal.

And what about overpopulation,  assuming the pace of climate change toward the runaway greenhouse somehow slows?  One demographer - Shahin Devoudpour estimates humans with lifespans of 1,000 years would lead to a "quadrupling" of the population within a few generations.  Hence, we would need the new Methuselahs to "forfeit reproductive rights".  Gee, ya think?  The other option would be to "shuffle off to a Martian colony and leave Earth to the kids".  Yeah, assuming they'd want to live in  a hellhole world becoming more like Venus every day!  See e.g.

Then we have another dreamer, Ingemar Patrick Linden, in his forthcoming book, The Case Against Death, who offers this chestnut:

"If our life and future is valuable then dying is one of the worst things that could possibly befall us...if we could live to 120 or 200 or 1,000 or indefinitely would this not be good? "

The answer here is, no, it would not be good if one is living in a literal planetary oven - baking every day, with little relief (even at night), power grids collapsed, scant food or water-  and polluted air.  This is something - runaway warming - the life extenders haven't planned for.  Even without the runaway greenhouse, too many living over such elongated years would not be good because death is needed to replenish and revive culture, scientific advances, and spur evolution itself.

What all these nitwits have in common is they fail to appreciate is that humans are animals first and foremost.  Possessed of animal senses, animal instincts and above all an animal body - and animal mortality. Which is why one famous atheist once referred to our species are "risen apes, not fallen angels."   But the longevists want to believe humans are above animals and so of a different nature. We are not.  We are matched to much of the same DNA as chimps (99.3%), for example.

But try to tell that to Ray Kurzweil, author or the transhumanist bunkum, The Singularity Is Near: When Humans Transcend Biology'.  Sorry to disabuse him, but that can never happen because humans are animals, finite in lifespan and subject to the same evolutionary laws as other animals - such as chimps - among our closest primate cousins.

Kurzweil is so daft, he actually conjectures someday uploading contents of the brain to cyberspace.  There, he presumes, it will be able to go on with whatever ruminations fascinate and not be heir to the slings and arrows of the flesh. He evidently hasn't processed that cyberspace itself is a projection of a material infrastructure - run on conductors, moving electrons, power transformers etc.  Hence, it is vulnerable to destruction and damage like the human body he is trying to escape. Think of violent climate change, earthquakes, war, terrorism or financial collapse.  Any of these or some combination can terminate cyberspace - and with it whatever minds are uploaded to it.

Back to Ingemar Linden.  His own emotions and myopia prevent him from seeing this. He then waxes on proving my point:

"For me the answer is clear. Death is a horrific evil and nothing is more important than preventing people from dying.  I am a death abolitionist and a life prolongevist."

Echoing Kurweil's transhumanist twaddle, i.e. that "death is a great tragedy....a profound loss." The truth is that nothing is more important than ensuring people keep dying at their natural ages- lifespans.  Even Thomas Malthus recognized this when he wrote in 1798:

"The power of population is so superior to the power of the Earth to produce sustenance for Man that premature death must in some shape or other visit the human race."

He wasn't exaggerating.  Even now we are looking at a vastly polluted, congested world - and an ever more CO2 -inundated atmosphere.  Add in these Methuselahs and what do we see? Well, more crowding, more conflict, more misery and destitution for the masses and more virulent hatred - for those who can afford longevity tune ups.

Here the only sane person emerging in the FT piece, Venki Ramakrishnan, must be given his due:

"All animals die, suggesting that death co-evolved with reproduction.  You're tossing different combinations of genes out (in evolution) to see which ones do better.  But in order to give them a shot the older generations have to get out of the way."

"The attempted elimination of death is simply a fantasy of California billionaires so taken up by the extended party they're having they never want it to end."

Author Barbara Ehrenreich would agree with this, writing in her book, 'Natural Causes: An Epidemic Of Wellness, The Certainty Of Dying, And Killing Ourselves to Live Longer':
"You can think of death bitterly or with resignation, as a tragic interruption of your life, and take every possible means to postpone it.  Or, more realistically, you can think of life as an interruption of  an eternity of personal nonexistence, and seize it as a brief opportunity to observe and interact with the living, ever surprising world around us."
Those are words the techie life "longevists"  would do well to absorb, along with their allies and enablers in academy.
Posted by Copernicus at 6:33 AM