The DART Asteroid Mission: Will It Really Succeed In Deflecting Dimorphos? The Numbers Fail To "Add Up" 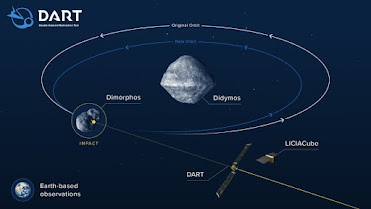 Trajectory for the DART Mission to defect asteroid Dimorphos

Earlier this morning  the National Aeronautics and Space Administration launched a space probe  called DART  (Double Asteroid Redirection Test)   in the first “planetary defense mission” called designed to deflect a distant asteroid.  We are also informed this is a test of technology that "might one day save the world".  But in that case, is this DART mission a genuinely realistic test of that capacity – or merely an elaborate PR stunt?

The $324 mission is supposed to be a practice run for future efforts to protect Earth from collisions with asteroids and comets and was  launched aboard a SpaceX Falcon 9 rocket from Vandenberg Space Force Base in California. Next fall, after a journey of more than six million miles, the probe will crash at 15,000 miles an hour into Dimorphos, a tiny "moonlet" that orbits a larger asteroid called Didymos.

Mission planners expect the high-speed impact to alter the trajectory of the binary asteroid, which isn’t believed to pose a threat.  Still, I dispute it will alter anything. Call me a skeptic.

Look, a number of asteroid defense schemes have been proposed over the years,  including: 1) firing a nuclear tipped missile at a large (e.g. 700- 800m) asteroid,  2) Using the YORP effect e.g.

And (3) using a simple kinetic collision. This latter  is what  DART purports to do.  Thus, the DART mission will test the simplest of these schemes—what space scientists call kinetic impact deflection—by steering the 1,200-pound (550 kg) , small-car-size probe into the pint-sized asteroid at roughly 15,000 mph (6700 m/s). This is presumed to possess enough force to change its velocity by a fraction of a millimeter or so per second, according to Andy Rivkin, lead of the DART investigation team at the Applied Physics Laboratory. The action will be photographed by a free-flying, pint-size cubesat satellite designed by the Italian Space Agency, which the probe will use to strike Dimorphos

But will this really divert the asteroid? Consider the maximal dimension of Dimorphos is  170 ft (~50m) across and with a mass of 4.8 billion kg.  It is being struck by a ‘mini Moke’ sized probe of about 550 kg moving at 6700 m/s.  The total momentum of the latter just before impact would be about 3.8 million kilogram meters per second.  This compared with the asteroid momentum of 4.8 trillion kilogram meters per second – even assuming a minimal speed of 1,000 m/s.

The mission gurus expect deflection as much as “fractions of a millimeter per second”.  What does that mean in real world application terms? Let’s be generous and assume the kinetic collision effect on Dimorphos lasts 1,000 s and assume we have an actual deflection of 0.5 mm/ s.  That translates into a total deflection of one half a meter.    If    q = s/ R   then given R = 1 AU, and s = 0.5m  the angle deflection from 1 AU distance is:

were considered, where r is the radius vector and F the force supplied. The element of asteroid surface area is dS.  The situations were confined to the cases therefore, where the impinging solar radiation was at right angles to the asteroid’s spin axis.  Three separate detections of the effect were announced, including for  a nearly spherical object (1998 KY), and on two more irregular objects, (1862 Apollo, and 25143 Itokawa).

In the case of the Apollo object the observed effect was approximately 3.0 x 10 -4 deg/day, vs. the theoretically –predicted YORP effect magnitude of 2.6 x 10 -4 deg/day.  This constitutes a real measurable magnitude and deflection for a serious asteroid – given Apollo objects are the most likely to inflict serious devastation on Earth. (Note: The DART deflection cannot be measured in deg/day given the interaction is not predicated on a prolonged deflection like the YORP effect requires)

Asteroids 6 miles across or larger, like the one that wiped out most dinosaurs and torched much of the planet about 66 million years ago, are believed to strike only every 15 million years or so.

There is no doubt that if this DART mission were a genuine physically realistic test of an asteroid deflection it would be of immense relevance and  importance.

I just doubt that it is.  But who knows, maybe in 10 months  I will be pleasantly surprised and be forced to alter my current assessment.