Mercury was at its point of greatest western elongation — its highest point of the year in the eastern sky — on Monday morning.  Let's use the diagram below to again remind ourselves about the configurations - greatest eastern and western elongation: 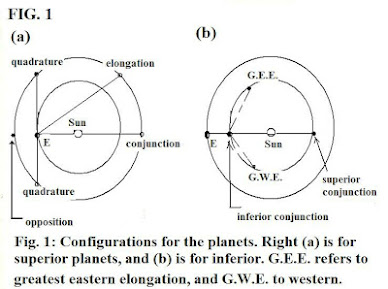 The figure 1(b) shows the aspects for an inner planet, which Mercury is (as well as Venus).  Note where the position denoted G.W.E. is relative to the Sun and the Earth.

Why would Mercury be difficult to have been seen on Monday despite having the highest altitude?  Well, not merely because of any clouds but also its position relative to the eastern horizon at sunrise. Mercury is the smallest planet in the solar system, smaller than our Moon, so it's  notoriously difficult to find for untrained eyes.

For my money the best time to get a good view of Mercury will be tomorrow morning about a half hour before sunrise -when I plan to be out with my  7 x 50 mm binoculars.  Why at that time? Well, it will be close to the bright (1st magnitude) star Spica and also near to the crescent Moon. Indeed, Spica and Mercury will be closest to the crescent Moon with Mercury positioned to the left of Spica along the eastern horizon.  The section of celestial map below gives the relative positions as seen from Colorado Springs, at a latitude of   38.8 degrees N. : 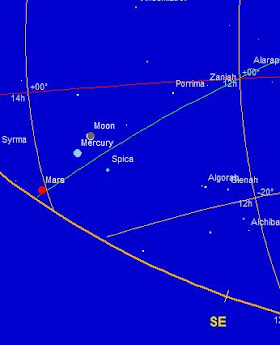 At first blush it may seem not to be a good idea to try to view Mercury near the Moon.  But the point is that given Mercury is difficult to find - even for seasoned sky observers - it is ideal because the crescent Moon (nowhere as bright as the full Moon) provides and excellent guide for where to look.  After all, we can find the Moon - in whatever phase- better than Mercury.  This is bound  to alleviate any frustration in locating the smallest planet.

By contrast, Venus will be much easier to find in the western sky around sunrise.  (It's usually the brightest object in the twilight sky not counting the Moon)

Another, much more distant planet - Uranus - will also be easier to find this week (Nov. 5th)  than usual because it will be in opposition.  Recall this aspect means the object is rising at the same time the Sun sets, meaning it will be fully illuminated.  The geometric configuration is shown in Fig. 1(a) which applies to any "superior" planet - meaning it has an orbit beyond the orbit of Earth.  Alas, it is not possible to see Uranus without a telescope or binoculars - and I plan to have both handy - my trust 7 x 50mm binoculars and a 25x Tasco refracting scope. The section of sky bearing Uranus is shown below - again from the latitude of Colorado Springs: 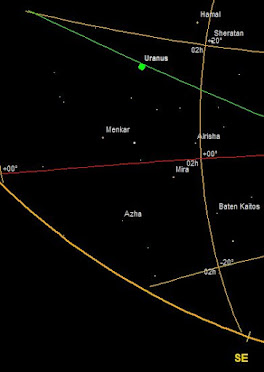 The useful point of reference here is that Uranus will be at due east (azimuth 90 deg) so should be relatively easier to locate than usual.