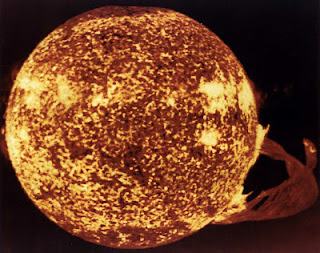 The magnetic helicity of a field B within a volume V is defined:

where the vector potential A satisfies:

From ’s hypothesis[1], the above integral is approximately invariant- so the minimum energy configuration is a “constant-alpha” force free field, e.g. curl B = a B.

A force -free field is one for which the conditions apply:

In actual working solar conditions, one prefers a gauge-invariant form of H and this is provided by the “relative helicity” – wherein one subtracts the helicity of some reference field (B (o), e.g. associated with  a = 0) and having the same distribution of the normal component of B on the surface (S).  Thence:

It is hypothesized that shearing and twisting of the field “injects” helicity and that this may be useful in quantifying: a) how much magnetic free energy becomes available, and b) whether instability can be predicted based on observed indicators of helicity at the level of the photosphere-chromosphere.

In this case it is also possible to write about relative helicity.  We may then resolve H r   observationally into two components based on twist and writhe for “relative helicity” such that[1b]:

Where T on the RHS refers to "twist" and W refers to "writhe".  Both T and W are needed to fully describe relative magnetic helicity.   The sign of helicity will be positive or negative, depending on what is known as the “hemispheric helicity rule".[2] That is, the force-free parameter a characterizing each active region will have a tendency to be (+) in the southern solar hemisphere, and (-) in the northern solar hemisphere.

When you think about it this makes eminent sense. (Think of the Coriolis force causing a preferred sign or handedness, relative to convective flows in the northern and southern hemispheres of a planet like Earth) If there is a preferred “handedness” (or chirality) associated with magnetic flux, it would be expected to exhibit a different sign in each hemisphere.

Observations confirm that this sign asymmetry exists throughout the solar atmosphere: in the corona, the solar wind and the photosphere. (For the latter evidence, see, e.g. A.A. Pevtsov et al, The Astrophysical Journal, Vol. 473, p. 533, 1996)

Also, if you carefully inspect the prominence in the lower right of the top image, you can discern both twist and writhe in the plasma filaments. Evidently then, prominences are capable of transporting magnetic helicity in the solar corona.