The Inflation Specter In Perspective - And What About Protecting Ordinary Folk As Well As Stock Market Investors? 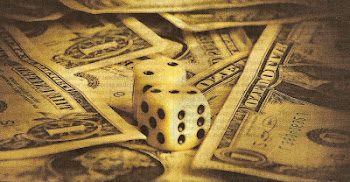 "Executives are seizing a once in a generation opportunity to raise prices to match and in some cases outpace their own higher expenses, after decades of grinding down costs and prices."-  'Inflation Helps Boost Profit Margins',  WSJ

One would have to be asleep under a rock not to have noted that inflation in the U.S. has hit a three decade high with sizable price increases on everything from steaks, to gasoline to diapers - due to a persistent supply shortage. According to a front page WSJ account yesterday:

"The Labor Department said the consumer-price index— which measures what consumers pay for goods and services— rose by 6.2% last month from a year ago. That was the fastest 12-month pace since 1990."

To add to the budget woes of millions, heating costs are also set to explode. Natural gas, used to heat almost half of U.S. households, has almost doubled in price since this time last year. The price of crude oil — which deeply affects the 10% of households that rely on heating oil and propane during the winter — has soared by similarly eye-popping levels.  And those costs are being quickly passed on to consumers, who have become accustomed to cheaper energy prices in recent years and now find themselves with growing concerns about inflation this year.

Meanwhile, the precious stock (equity) investors and others have been given special tips how to survive this current mini-maelstrom which saw a dip in stock share yesterday and increase in bond yields. (The two generally move in inverse directions.)

Enter then WSJ finance columnist Jason Zweig ('An Investor's Guide To Deflating Inflation Fears',   Exchange,  p. C 3, Nov. 6-7).   Zweig basically warns these entitled folks - who made out the best during the Fed's easy money past ten years- not to bite on the next "big thing".  He writes: "Analysts, economists and other forecasters are no better at predicting inflation than at anything else. In fact, they stink at it."

Then quoting Alan Greenspan - citing Fed inflation "doggedly forecast but which never occurred."  Zweig's basic advice? Don't panic but don't jump into novel untested stocks.  Just buy and hold.  After all, from 1927 through 2020 "U.S. stocks as a whole outperformed inflation by 4.9%".  And why not, given how the Fed has kept interest rates so low the past ten years - so that savers like wifey and myself garner almost no yield.    Meanwhile, stock share values (in terms of P/E ratio) have shot up beyond the realm of reality.

Zweig also advises the bigshots to "add TIPS" or Treasury inflation protected securities.  They:   "aren't cheap but still offer protection against unexpected jumps in consumer prices down the road."

But what are average blokes to do, the ones who're facing all these rising prices?  Grocery prices alone climbed 5.4%, with pork prices up 14% from a year ago.  The good news is that this is truly temporary, given there is "no evidence inflation is due to macroeconomic factors" according to Michael Hiltzik (author, 'The Plot Against Social Security') writing in the LA Times yesterday.

Hiltzik, famous for his books and columns roasting the Neoliberals for their lies and false depictions of the economy - especially when a Democrat is in the White House-  also called out CNN for its report that aired November 4th.  That skewed report focused on one Texas couple who claimed they were buying 12 gallons of milk a week for their 9 children, and they were staggering under a price increase to $2.79 a gallon, from $1.09 a few months ago.   While Hiltzik appreciated that 12 gallons is probably correct for a family that size, he also pointed out that "the price of a gallon of milk hasn't been $1.99 for over forty years."  So either that couple was exaggerating, had a flawed memory or else was going to the wrong grocery - one that deliberately gouges.

Hiltzik true to his usual role as a skeptic of capitalist media also noted:

"Wednesday's inflation report places the seasonally adjusted change in whole milk price at minus 0.3 percent over the last year and negative 0.5 percent from June through September."

As he added, "This isn't to criticize the family but to flay CNN which didn't report the factual context of the family's experience."

Noting also that CNN never mentioned that the family is entitled to a monthly child tax credit of as much as $200 to $300 per child depending on age.  But why mention that when this benefit arose out of Biden's American  Rescue Plan bill passed earlier, and everyone in the corporo-media wants to piss on Biden's agenda now?

That includes the WSJ editorial writers who recently ranted (‘Inflation and Building Back Worse’, Nov. 11, p. A18):

"It’s important to understand that the current burst of inflation isn’t an accident, like getting hit by a reckless driver. This is the result of reckless policy. Congress and the White House flooded the economy with $1.9 trillion in new spending in March….  Democratic transfer payments that reduce the incentive to work have created the worst labor shortage in decades. Half of all small businesses report they can’t fill open positions no matter how much they increase wages. Vaccine mandates are now compounding the shortage”

If Biden's “reckless policy” is the source of soaring inflation, how explain Barbados’ explosion in prices, as well as Guyana’s, Trinidad’s, Germany’s, The Netherland’s and India’s?   Neither Biden or the U.S. congress have influence there.  The reason is that the reactionary pages of the WSJ are deliberately carrying water for the Trumpers and Repukes to enhance the chances of a GOP takeover of congress in the midterms.

That includes their twaddle about the reasons for the labor shortage and vaccine mandates.  Indeed, one can argue, as I have, that had the vaccine mandates been in place earlier we'd not be faced with so much of this mess now.   This is given that the supply chain blockages are almost entirely due to the pandemic - which went on longer than it had to because dumb red staters refused to vaccinate.  They were more determined to try to make the libs cry or own them, e.g.

Let's also point out, as Hiltzik does most of the price increases are from the companies themselves. As Judd Legum points out on his Popular Information website, e.g.

Price increases on consumer goods have been imposed by Proctor and Gamble on products from "diapers to toilet paper".  You don't like those price hikes? Then write the honchos at P&G and voice your strong complaints', but don't whine about  Biden creating the price hikes via his spending bills. (Like idiot Joe Manchin.)

P&G cited "material costs" as have other companies which have also hiked their prices including: Whirlpool, PepsiCo and Coca Cola, Maytag and Amana.   Hiltzik notes the companies' reference to material costs and supply shortages may or may not be accurate, but "it's certainly true they've used the talk about inflation to raise their prices more than their cost increases warrant."

I concur, and as I warned months ago when the pandemic was at its peak, companies would exploit it to increase their prices and profits.  I also warned that the reactionary press and shameless GOP traitors would exploit it against Biden to try to gain unearned power.

Fast forward to the present, and Hiltzik notes economist Josh Rivens (of the Economic Policy Inst.) has correctly indicted the mainstream media for its "unwarranted leap" in attributing too much price hiking to the fiscal relief and relief programs. Hence, there is NO evidence that providing more fiscal relief ought to be suddenly abandoned.  Got that, Manchin?

So what to do in the meantime in dealing with the current inflation? Well, you do what seniors have always done when their cost of living benefits (COLA) has not kept up - mainly because of the Federal Reserve's lowballing of inflation.  We substitute cheaper items at the grocery.  Steaks or beef too high, you buy chicken.  Chicken too high, buy fish or do like we did in Barbados and get "cast off"  meats, e.g. lamb tongue, pig knuckles  - snouts, chicken gizzards, livers etc.  Or hell, just go Vegan for the time being.  After all more meat can mean more prostate cancer.

This approach can be used with almost any product and if you go next time to the supermarket note that in store brands are far less in cost than name brands.  That's why we stick almost entirely now to Safeway Signature brand products- from aluminum foil to mayo and hot dogs.

Lastly, Hiltzik sounds a warning not to buy into the media claptrap and the deliberate distortion of Biden's agenda.  In the end, swallowing this rot could be almost as bad as swallowing vaccine rubbish conspiracy ideations.  In this case it may well mean depriving millions of ordinary Americans of much needed economic reform.  After all, the stock owners already got their economic and fiscal bonuses for years in a hot stock market - thanks to the Federal Reserve's quantitative easing and low interest rates.

Joe Manchin
Republicans, and Manchin, Work to Poison the Well for Biden's Build Back Better Plan 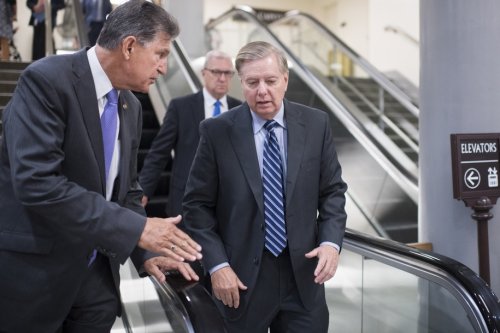 — from The World in Transition (CEPR)

The October Consumer Price Index data has gotten the inflation hawks into a frenzy. And, there is no doubt it is bad news. The overall index was up 0.9 percent in the month, while the core index, which excludes food and energy, rose by 0.6 percent. Over the last year, they are up 6.2 percent and 4.6 percent, respectively. This eats into purchasing power, leaving people able to buy less with their paychecks or Social Security benefits.

There is no argument about what the numbers show, but the key questions are what caused this rise in inflation and what can be done to bring it down.