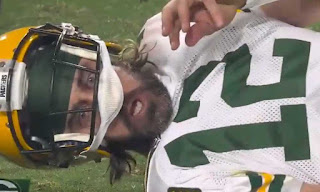 "Oh no! Man, I think they're gonna catch me in a vaccine lie!"

"We musn't let the anti-vaxxers doubt the efficacy of vaccinations when mathematics proves that they can save vulnerable lives and wipe out disease."  - Kit Yates, 'The Math of Life & Death',  p. 243

"Whoo boy. Imagine what Aaron Rodgers would have spit out if he wasn’t such a 'critical thinker.' The reigning MVP of the NFL, and one of the league’s most popular and prominent players, hit almost every anti-vaxx talking point, conspiracy theory and Facebook meme there is Friday in trying to justify why he isn’t vaccinated and why he lied about it. ....  I can only imagine NFL Commissioner Roger Goodell watching in horror as one of the poster boys for his beloved 'shield' revealed himself to be the crazy uncle at Thanksgiving, prattling on about the truths he’s discovered on the internet."  - Nancy Armour, USAToday, yesterday

"Here's the deal on Aaron Rodgers, and why I'm no longer likely to take pleasure in seeing him make a 35- yard touchdown pass. Since he revealed what a jerk he is, refusing to get vaccinated, taking the horse medicine, and considering himself to be a "critical thinker" for choosing to believe a guy like Joe Rogan over Dr. Fauci, he's just kinda forfeited his "golden boy" shine. He played cute when he told reporters he'd been "immunized," a lie based on a whole bunch of homeopathic crap he'd taken, along with drugs available only to very rich people."  - Jaime O'Neill, 'Self-Sacking and Monday Morning Quartebacking', smirkingchimp.com

"I'm not one of those anti-vaxer  flat earthers, I'm somebody who's a critical thinker."

But the problem with spewing B.S. about being a critical thinker is that a genuine critical thinker can always spot it. Such was the case  when the lying, entitled twerp and resident Packer Diva then also insisted he didn't lie when asked if he was vaccinated.  He said "I was immunized" and then gaslighted his audience by asserting the media "misinterpreted" it.  NO they did not!    Because being "immunized" is code for unproven bull shit cures and remedies.  It isn't the same as being vaccinated.  It's a lie - a dodging of the question by replacing the word with a euphemism most may not correctly process, conflating "immunize" with "vaccinate".

Another collateral lie AR spewed, likely to try to validate his not getting vaccinated, was that he's "allergic" to the mRNA vaccines. But having said this without a scintilla of evidence we can be sure it's simply more bollocks he made up on the spot.

Rodgers went on to rant:

“Why do people hate ivermectin? Not just because Trump championed it, but because it’s a cheap generic, and you can’t make any money off it!"

Because, you dumbass, it's a frickin' HORSE de-wormer!  Get it?  Maybe not.  So in case Rodgers or one of his pals happens to read this he can go to this earlier post:

I point out in that post that all the horse de-wormer patients - or rather most- have had to carry around extra pairs of diapers because of loose bowels.  Why?  Because that's the way a de-wormer works! By aggressively flushing out the parasites with bowel contents.  Rodgers yesterday claimed he "did a lot of research" but obviously only into the skewered claims of the anti-vax nuts like Tucker Carlson  and blowhard wingnut Joe Rogan - the same assholes keeping us back from taming the Covid pandemic.   (Rodgers - showing his IQ is a lot lower than I thought- admitted he received "medical advice"  from podcast host Joe Rogan )

Further proof this twit doesn't know his ass from a hole in the ground,  he slammed the Packers organization  for "sending in this stooge early in training camp to shame up for being nineteenth in the league in vaccination rate".  Well, deal with it, sonny.  If the shoe fits and all that.  And if you are one of the numskulls in this country refusing the vaccine, then you are one of the reasons the pandemic is still  around with potential new variants the longer you "faux freedom" dopes continue.

More evidence Rodgers wouldn't make it into Mensa :  He parroted the firmly debunked conspiracy rubbish that the Covid vaccine "causes sterility".  What will AR spout next?  That the shots convert any takers into lizard people?  (I've already had the first two Moderna vaccines, and the booster, and still no sign of any scales.)

And get this: his bitching about this needed accountability (from the Packers' "stooge")  was before falsely claiming that there is a lot to natural immunity.  I suggest this little asswit MVP liar - who's now likely cost the Pack a first round bye - if not a playoff berth - extend his research beyond Tucker Carlson and Joe Rogan to  the last chapter of the book The Math of Life and Death.  It deals with vaccination as well as variolation - as applied for example in the bid to find immunity to smallpox before vaccines existed.  In securing such actual immunity, as author Kit  Yates notes, actual scabs or pus from smallpox patients (who recovered)  was inserted into the nostrils of those who desired immunity.   The effective death rate was thereby reduced from the 30 % or more common to smallpox to about 2 percent.

Have any of Rodgers' efforts at  Covid "immunity" approached anything like that? I doubt it.  More likely the guy was just popping some homeopathic pills.  Or believes ivermectin and some "monoclonal antibodies" did the trick.  Again, having lied already regarding vaccination we can't trust anything he says.

Not yet finished with his fulminating, the Packer QB brainiac next opined:

"You have a moral obligation to object to unjust rules and rules that make no sense,"

Thereby misquoting the Reverend Martin Luther King who   wrote in a 1963 letter from the Birmingham, Alabama jail,

Tr0uble is, the anti-vax mandate fools have no case because there is precedent for vaccine mandates going back to the last century. Do the research, AR! Check on "legal mandates for smallpox vaccine".   To cap off that Rodgers is another wingnut dummy he bloviated:

"What about ‘My body, my choice? What about making the best decision for my circumstance? "

Sorry, chief.  In the case of a virus like Covid "your body, your choice" doesn't factor in.  The reason is that you can be an unknowing agent of the disease and infect others.  (Like you may have already, going around maskless, interviewing with the media - like after the Cardinals' game-  and not being vaccinated.)

And to top it off - instant disqualification to even being admitted to the Mensa test, bellowing:

"This idea that it’s the pandemic of the unvaccinated, it’s just a total lie.”

Sorry, AR.  The unvaccinated are 29 times more likely to be hospitalized form Covid   according to a recent CDC study.    But, of course, you  likely don't accept that either,  preferring to believe Joe Rogan and Tucker Carlson.  What?  Will you join QAnon's morons next?

"If the vaccine is so great, then how come people are still getting COVID and spreading COVID?”

Hey, Sparky, dig this (or try to):  While low levels of the virus have been found in some vaccinated people in so-called "breakthrough infection", they are nevertheless  far less likely to be contagious and transmit COVID to others.

The most annoying of all the bilge Rodgers spewed yesterday was his inane claim that he "created a 500 page report for the NFL"  with a team of "MDs, holistic doctors, different people".  What different people? QAnon nuts, like Judy Mikovits, featured in the mockumentary 'Plandemic'?  Truth be told, I doubt Rodgers could create a 500- page  3" x 5" layout comic book, far less a rigorous full page report with any scientific dimension.  Whether this hare brained diva knows it or not he's as bereft of sense as any of the flat earthers.

I can just hear many fellow Pack fans asking: 'Why are yuh so down on  our star quarterback?"   Well, because he's a  selfish  liar, spoiled sullen brat and betrayed the whole team.  He also spat on dedicated Pack fans and the franchise!  He dissembled using glib misdirection when asked to be honest about being vaccinated, playing with words and probably believing his imaginary "remedies" - like worm medicine - would protect him.   They didn't and having been exposed the punk got rattled and put on the unhinged show we saw Friday.

As for tomorrow's game at KC - Arrowhead Stadium - I forecast a Chiefs' 33-14 thrashing.  The pass rush will simply be too much for the likes of backups Jordan Love,  Blake Bortles or whatever other replacement QB Matt Lefleur plans to field.  Undoubtedly it'll be a butt-ugly game with the Chiefs'  D stacking 8 men on the line, daring the Packer offense to throw.  We will be lucky to escape 5 picks by the Honey Badger. The Vegas Sports Books didn't have KC a 7 1/2 point favorite (now settled at 7)  for nothing after AR fessed up.

This is the excrement that golden boy AR has wrought on the team and the hard working, long time fans of Green Bay - and Wisconsin.

Am I angry? Damned straight and also bloody disappointed because I thought Aaron was smarter than that - so did Janice. As she put it: "Jeez, it looks like he's just another right wing nut with all those references to the woke mob!"   And you all know how we feel about right wing nuts.

Posted by Copernicus at 4:42 AM