The "March for Life": A Pre-Moral - Not Moral - Display 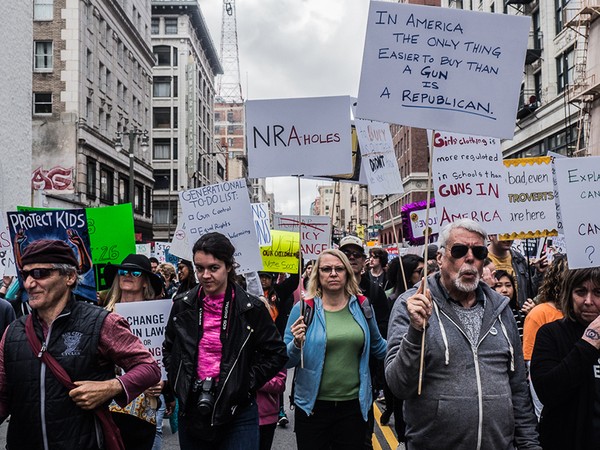 The spectacle in D.C. yesterday, operating under the banner of a "March for Life', featured a crowd of perhaps 275,000 bearing flags, banners and placards, that flowed down Constitution Avenue, filling the street, and then  rallied at the Supreme Court building across from the Capitol.  For reference, this is significantly less than The Women's March on Washington  attended by an estimated 485,000 people last Saturday

One of the PR positions and framing adopted by the "Life" crowd is that they were adamantly "pro-woman" - which, of course, is poppycock. If you are for taking away a woman's control over her own body - even after rape or incest - you are in fact, not pro-woman but anti-woman.  In addition, you are not moral by any stretch, but PRE-moral.

The difference again is wonderfully articulated by Cheryl Mendelson, former Professor of Ethics and author of 'The Good Life' , who I earlier  (Oct. 11 post) referenced in terms of explaining the  nature of moral capacity and defining the moral character. Mendelson's take on the anti-abortion movement and personae is instructive in terms of firmly placing them in the premoral spectrum. As she writes (p. 157):

"The premoral mind confuses the disgusting with the wrong and retains an infantile fear of things sexual. Its rationality is overcome by emotion, fantasy, wish and projection. The belief that extracting a 10-week fetus from a woman's womb is murder rests to a large extent on the sense of disgust aroused by the thought of destruction of living tissue.

When fundamentalists insist on risking the life of the mother to deliver an anencephalic fetus they take this tendency to an extreme. People who think this way are unable to override disgust with rational appreciation of the objective characteristics of the fetus. The ability to do so is an indispensable trait of the moral mind."

In other words, the basis for a truly moral mind presumes the capacity for rationality to assess objectively - as opposed to emotively.  This is something I've written about a number of times before.   A point made in my Aug. 1, 2015 post was that no sane person in his or her right mind could possibly regard a "zygote" as a person, or a fetus as an "unborn child". There is simply no standard by which that passes even elemental laws or tests of logic, or science.  A child cannot be "unborn" because by definition it is already born!  Hence, an "unborn" (fetus) cannot be a "child".  Thus, we send the 'child' to school, get him to do his homework, to take his medicine, cross streets safely, respect his elders and so on. If unborn, it's a fetus, not a "child"  so all those activities are preposterous.

This is also why Mike Pence's arguments to the March for Life supporters, i.e. that he can get a "personhood" law implemented, is pure bollocks. Pence is talking from emotion, not science or rational objectivity.  A person, a human person, must have at least minimal capacity for basic cognition and rudimentary choice. It must possess a brain, at the very least, which evinces definite brain waves. Anything that doesn't is a proto-human entity, but clearly not a person. The logical error made is called the "genetic fallacy" as first described by Antony Flew ('Thinking About Thinking'). That is, arguing that because a thing is going to become something, it IS something. It would be like me picking up an acorn and claiming it's an oak tree. Nope. No way. Only an insane person would assert that!  Is Pence insane? Not likely (we must hope!) but he isn't exercising any rationality.

As a former Roman Catholic, however, he may still be under the dogma of the Didache which declares:

Which is obviously medieval nonsense, as I showed from the arguments above.

Another failure of rational objectivity among the marchers for life is their lack of recognition that nature itself is the most pervasive source of abortions. As Sagan and Druyan observed in a widely circulated article from 1991: "Most fertilized eggs are spontaneously miscarried"

"Nature sloughs off early pregnancies at a high rate and we do not hold funerals for these embryos and early fetuses.  As many as 60 to 70 percent of fertilized eggs are lost overall, usually silently - without anyone ever knowing fertilization took place. Up to 15 percent of known pregnancies miscarry in the first trimester. Were we to take seriously the morbid pseudo-moralism of the fundamentalist Right, we would recognize these countless millions of miscarried embryos and fetuses as lost lives and be sunk in a vast and permanent sea of endless mourning for the unending deaths of innocents."

So the question arises: Why don't the anti-abortionists have this endless mourning for the dead embryos, fetuses? Well, first - because there are too many and they'd never have an end to funerals or morbid grief - as Mendelson points out. Second,  because the premoral mind only makes a federal case out of it when individual women are seen trekking to Planned Parenthood for abortions!  IF those were carried out silently, discreetly in private (like nature does),  say using an abortion pill-  none of this would be known and no anti-abortion hysteria could exist  This is why the sooner  much wider access to RU-486 is achieved the better, to take the issue out of the premoralists' mitts. The problem now is that too many right wing extremists are preventing their state's citizens from accessing it - either by using excessive pricing, legal maneuvers or keeping it out of state insurance exchanges.

Mendelson goes on to make an equally cogent point regarding the false moral righteousness of these people (p. 160):

"To equate the termination of an early pregnancy with the death, indeed the murder, of an infant or child is not merely morally uncalled for but dangerous. It implicitly demeans the value of real people's lives, both adults' and children's, and confuses the reasons why we protect them so vigilantly. If our moral obligations to one another are abstracted from our capacities for feeling, thinking, intending and wanting - from everything that makes us human and forms the ground for our care and protection of each other- we are thrown back into a premoral kind of thinking.

To regard the destruction of insensate agglomerations of cells that contain human DNA as the destruction of a person's life is to step outside the moral into the brutal and dangerously irrational kind of thought that substitutes taboo for reason. It is a regression to quasi-magical thinking."

It is, in other words, a reversion to the genetic fallacy: mistaking the acorn for the whole oak tree. The human fertilized egg for the complete human person, which in either case is preposterous.

So why commit this fallacy, this regression to a premoral mental state? It is because the people who invoke it have the belief that these agglomerations are "ensouled". They thus imbue the rudimentary gaggle of cells with a supernatural aura for which no proof exists at all, none.  As Mendelson puts it (ibid.):

"The premises that the fertilized egg, embryo and fetus are ensouled or sacred are ideas that cannot be proved  factually and that many religions vehemently reject."

The monstrous error at the heart of all anti-abortionists' thinking is the genetic fallacy and also the slight given to the already born- in terms of tax policy, governmental assistance etc. If you're only pro-life to birth, then you're a damned hypocrite, and don’t truly believe black lives (or any lives) matter at all.  If you’re an anti-higher tax clone of Grover Norquist – or believe taxes are only for military defense and not social support, ditto. If you're against the government providing free child care so a working class parent can afford to get a job, ditto.

If you're truly pro-life you have to take civic, community ownership for the child's welfare -after it is born as much as before, via appropriate legislation- enabling it, not impeding it. And further this has to be effective  all the way through that child’s dependent years.  This applies with special force to the most economically marginal of our nation, the people barely scraping through at Walmart or Mickey D jobs because enough better jobs aren't available.

Looking out at the sea of pro life marchers one saw many a sign that begged to ban Planned Parenthood, and overturn Roe v. Wade. Is this moral or premoral? Mendelson again (ibid.):

"Do those people who oppose abortion on the basis of religious tenets have the right to impose their religious views on people who reject them?  The moral answer, emphatically, enshrined as law in the United States Constitution, is no. People are within their rights to attempt to persuade others to adopt and live by their religious ideas but not to force them to do so using laws and the power of government."

Thus, those two hundred thousand odd marchers for life were totally wrong if they hoped - by the force of their march - to get government to enact laws or SC rulings to prevent abortions and hence deny others the right to have them. In this sense, Pence, when he proclaimed:

“We will not grow weary, We will not rest, until we restore a culture of life in America for ourselves and our posterity,”

Is way out of his depth and position if he means anything other than the use of persuasion to attain that "culture of life".

Yes, fight for your belief that the fetus is an equal person to a full -fledged conscious human, if you must.  But do so on the field of reason and persuasion, not coercion via abominable domestic terror tactics or the jackboot of government law. To quote author Julian Baggini ('The Edge of Reason') again:

"When we give up on reason, the only tool we have left is coercion."

Alas,  coercion violates the very basis of our constitutional system which is one of declared rights, not use of force to attain an end.  This is also why Trump's global gag rule on abortion discloses he has no use for rights, but prefers coercion - like the authoritarian he is. He also - like his premoral supporters- has no real reverence for life, given that gag rule will lead to at least two million more abortions per year, by some estimates. Not to mention hundreds of thousands of more women dying by taking matters into their own hands.

The problem is that in Trump World with its embrace of alternative facts, too few people may accept it. Worse, they may be inclined to sacrifice their reason and treat every tweet issuing from a Trump brain fart as coming from the Oracle of Delphi.