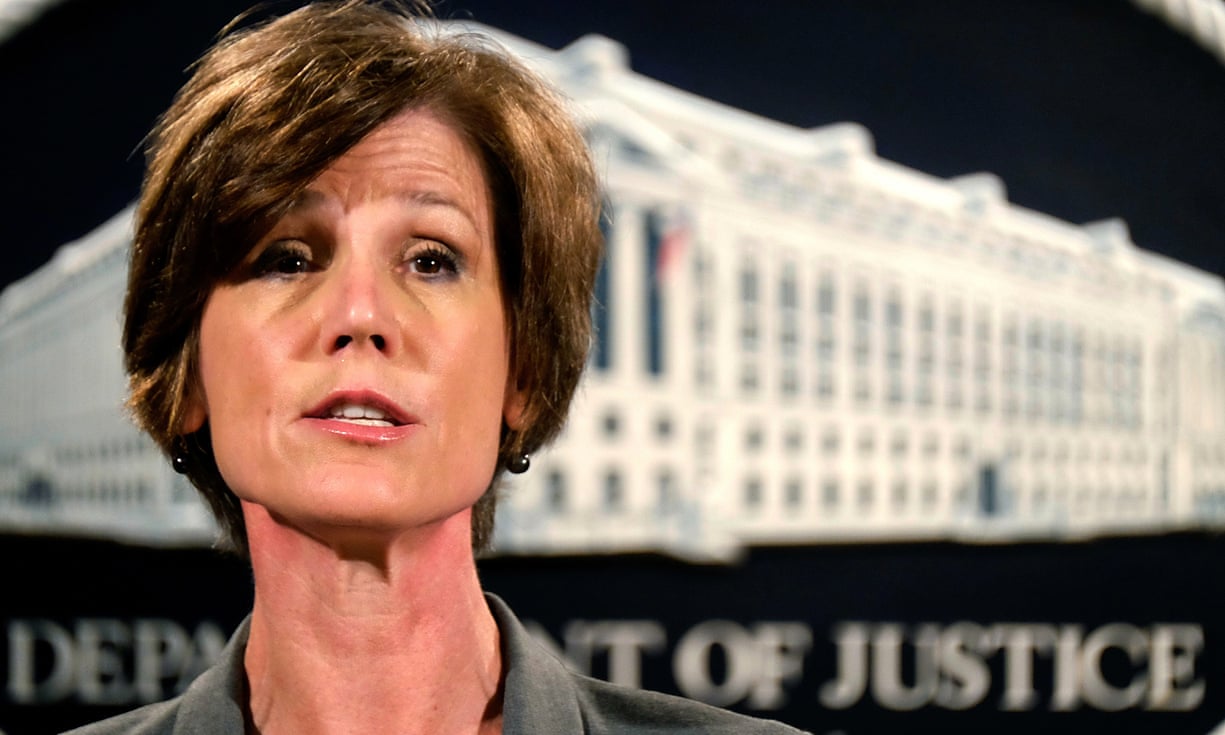 Two years ago it was Sen. Jeff Sessions who grilled Sally Yates on her ability to be impartial, asking:

Yates didn't hesitate in answering:  "Senator, I believe the attorney general or the deputy attorney general has an obligation to follow the law and the constitution and give their independent legal advice to the President".

This is, in fact, exactly  what Sally Yates did, but it was ignored - after Trump's unlawful "EO" created vast chaos and irreparable harm, leading her to take the action she did.

Millions of us who lived through Nixon's "Saturday Night Massacre" - when he fired two attorneys general (who refused to fire Watergate special prosecutor Archibald Cox) - were shocked and horrified when BLOTUS Trump fired Sally Yates last night. What did Ms. Yates do to deserve such ignominious treatment?    According to the Trumpistas, she told justice department lawyers not to defend his executive order banning entry for people from seven Muslim-majority countries.

As I wrote in two previous posts, this was quite correct as none of these so-called "executive orders" has any force of law behind them, having not been properly vetted. Worse, the content clearly is in violation of the Constitution, including equal protection under the law and the establishment of religion clause. Ms Yates saw these violations clearly and acted upon them, as a principled person charged with impartial justice would.

But Trump's gaggle of Nazis, especially Steve Bannon,  didn't see it that way. They  said Sally Yates had “betrayed” the department by refusing to enforce a legal order that was “designed to protect the citizens of the United States”.  Of course this is balderdash, because Trump's scrap sheet decree framed as an "executive order" was unlawful,  carrying no weight, none.  Bannon and the other assholes who drafted it and fired it off didn't even bother to do a modicum of cross- department vetting to ensure it was doable and consistent with existing practices.  Because of this they had to walk back the green card aspect, i.e. initially denying entry to legal green card holders.  Even Iraqis who had helped U.S. troops were included in the insane ban, as well as an Iraqi general fighting ISIS.  As some military experts have put it, this is sheer "insanity" when we need Iraqis to help root out ISIS.

Nor did Bannon and his fellow reprobates have the sense to alert the affected agencies (e.g. Homeland Security) before releasing it so they could at least get their operations in synch. No, they just dropped the hammer, forcing agencies to cope with the thousands of suddenly affected travelers - including Harvard professors, students, doctors - one from Cleveland Clinic - on the fly. Again, sheer insanity.

Thus, this act of Bannon-Trump's discloses they do not believe in judicial independence and insist the DOJ become their political pet to interject and impose wanton, lawless policy. The very nature of the language used, e.g. "betrayed", indicates this - when Ms, Yates was following the historical and principled position of DOJ independence from political influence.

This is evocative of the Reich Courts which replaced the normal Weimar judiciary during Hitler's reign. Hitler  - like Trump now - insisted and demanded "loyalty" from his judiciary to thereby enact his Reich laws (e.g. which enabled seizing Jewish property)  so well described in many books, such as Konrad Heiden's, 'The Fuhrer'.   My point is that when an independent judiciary is quashed it should be the first sign of impending tyranny to vigilant citizens.

Harvard Law Professor Lawrence Tribe, on MSNBC last night, offered this view, when asked 'how big a deal it was to fire the acting attorney general over this issue'':

"I think it's historic. It certainly reminded me immediately of the Saturday night massacre. One of the main differences is how quickly this has happened with the Trump presidency. It's like history is being collapsed into a black hole and everything is happening faster than the speed of light. It seems to me that because the Sessions nomination is already controversial, because the executive order really challenges who we are as Americans and violates important parts of the Constitution - including the clause forbidding an establishment of religion  - including the many protests against this president, I think this is an important turning point in our history.

I think tonight is part of that extraordinary moment we are living through. "

When next asked if it was right for Trump to relieve Ms. Yates of her job, and replace her, Prof. Tribe responded:

"The President had a choice. He could have arranged for the appointment of a special counsel to defend his position even when the Justice Department wouldn't. There are certain limited cases in our own recent history where the Department of Justice was unwilling to defend a particular law and congress appointed someone to defend it. In this case, it wasn't a law that was an issue but an executive order, the president might have arranged through the White House counsel's office to have his order defended. But for him to turn the Justice Department - because of this discharge- into part of his fiefdom and compromise its independence suggests that he has no commitment to the institutional integrity of the department we rely on to represent the rule of law. And not simply the rule or whim of the president of the United States,"

Note carefully first Prof. Tribe's distinction of a law (e.g. settled law) from executive order. Note also that as opposed to his reckless and tyrannical act of firing Ms. Yates, he had other options. Namely getting his own counsel to defend his order, and even better, make the full case that it comports with the constitution. But this he did not do! Authoritarian narcissist that he is, he insisted conformity of the DOJ with his personal, unlawful decrees and hence making the DOJ "part of his fiefdom"  to quote Professor Tribe.

If we as a nation can't see anything seriously wrong with this, we are beyond hope. However, I am convinced the spreading protests show that enough citizens are aware and are  not prepared to initiate or allow another version of Hitler's Reich Court.

For perspective here, as the country’s top law enforcement official, Ms. Yates  had control over the justice department’s immigration litigation office, which has handled the federal complaints filed against Trump’s order since his bombshell policy was announced on Friday. As she made clear in a letter to justice department lawyers :

“Ms Yates is an Obama administration appointee who is weak on borders and very weak on illegal immigration.It is time to get serious about protecting our country. Calling for tougher vetting for individuals travelling from seven dangerous places is not extreme. It is reasonable and necessary to protect our country.”

Of course, this is nonsense only meant to distract from the political basis for the firing. As I noted in the last post, Mike Morrell - former CIA deputy director- noted the ban is purely for show and didn't  get at the core problem. In his words:

"I think the order is going to make the threat worse. It is going to make us less safe. First of all, the biggest problem we face is home-grown terrorism.  Of the roughly hundred people who've been indicted for Isis -related crimes over the last three years, eighty five percent were American citizens. This doesn't get at that at all.... It doesn't make the danger any less and it's playing right into the Isis narrative that it's a war against Islam. So this is going to be a recruitment boon for Isis."

Morrell also exposed the blatant Trump lie that these nations were on Obama's hit list. In fact not. They were really part of a program to enhance the security of a visa-waiver program for people traveling from European countries. So the Trump bunch effectively enhanced and 'weaponized' a nominal visa waiver program.

After firing Ms. Yates. Bannon-Trump drafted Dana Boente to take her place. What we know is that he is the US attorney for the eastern district of Virginia, and also an Obama appointee.

A White House statement quoted Boente as saying: “I am honored to serve President Trump in this role until Senator Sessions is confirmed. I will defend and enforce the laws of our country to ensure that our people and our nation are protected.”

This may well be a more or less accurate statement. The not so sanguine news this  a.m. (CBS) is that Mr. Boente has ordered the DOJ to comply with Bannon-Trump's "order".   Well, there may be limits to adhering to principles and demonstrating courage in these difficult times. Look how the asshole Sean Spicer even threatened over 100 State Dept. employees even after they used the Dissent Channel - which by law makes them immune to political  threats.

In the meantime, after this new insult, the Democrats must go full ballistic on Trump's nominees including Jeff Sessions. Any Dems voting for these nominees, OR who go against a filibuster for Trump's Supreme Court pick, will be listed by name as Vichy Democrats (collaborators) on this blog. Everyone, from every sphere or occupation, must now grasp the seriousness of the national situation. We are approaching a constitutional crisis because of the extremists now running the country and there will be no peace, no relaxation no cessation of dissent until they are neutralized or removed.

Posted by Copernicus at 8:48 AM

Sally Yates was also recently disallowed from testifying to the House Russia investigation. Read more about it on my blog post here.