McAdams about 18 years ago doing a fist bump after nearly destroying a usenet newsgroup on the JFK assassination with which he didn't agree. He's since been fired by Marquette Univ.

It appears known, long time JFK assassination conspiracy disinformationist, .John McAdams (he likes to write his name with a period in front - maybe as reminder to pause and remember which persona he will be for a day) didn't approve of my review of Richard Charnin's excellent book, e.g.

On one shilling -for- the- Warren Commission forum, McAdams claims to have tried to dig up material on me and learned:  "No academic appointment, he never had any job with any reputable scientific organizations - and has been an atheist for 25 years and written dozens of  articles in major newspapers and had  one-on-one debates with priests, ministers."

But if this is an indicator of his googling or research skills it shows he's beyond pathetic.  Even the most menial googler would have learned (from the All Experts site) that I've been an atheist 36 years (not that this has any relation to the JFK assassination)  and also written four atheist books, none of which McAdams mentions. But why should he have since the whole point was to demean my accomplishments and by extrapolation the book review.  Had he done more intense research as opposed to acting the part of a "hit man", however,  he might have learned I am an Emeritus member of the American Astronomical Society and a member of its Solar Physics and Dynamical Astronomy divisions. He'd  also have encountered my appointment at the Geophysical Institute - Space Physics Dept, over 1985-86 and also my appointment as a peer reviewer for the NSF in the 80s  - for space and solar physics papers.  Then my additional appointment to help in completing the most massive monograph on solar -terrestrial physics  yet published: The Solar -Terrestrial Predictions Proceedings (Meudon).  Oh, then there was my appt. as tenured physics lecturer at Harrison College, but I guess this was too "small fry" for McAdams to consider "reputable".

Conveniently, McAdams leaves out any mention of my physics books including the most recent 'Modern Physics: Notes, Problems and Solutions', and 'Selected Analyses in Solar Flare Plasma Dynamics'. But we give him a break here, because any dope that can't even correctly nail the number of years I've been an atheist assuredly wouldn't be able to grasp the use of the Landau contour - say applied to the 2-stream instability!

He then bellyaches that  "usually peer review means reviewed by a bone fide expert" - but two things here: 1) I never claimed the review was "peer-reviewed" from a "scholarly journal", and 2) I am most certainly a bona fide expert on the JFK assassination having already written one of the most extensive books of analysis ever: 'The JFK Assassination- The Final Analysis' based on more than 35 years' research.
-
To the point (1),  since the average peer- reviewed academic paper in a scholarly journal is only read by 0.12 people on average (stat from one American Physical Society survey) then why put it in such a limited venue when a more popular one assures far more readers? (And indeed, the link above for my blog review has now had over 160 hits  - not a lot - but I think 160 > 0.12!  Also, I have a review posted at amazon.com as well.)

Of course, all this deflection from the book review and huff and puff about me and my credentials is intended to buffalo readers who then won't stop to ask why this guy hasn't written a single sentence about the content of the book review.  As opposed to interjecting half-assed knowledge concerning my background, why  not instead show exactly where my use of Poisson statistics (and Charnin's by extension) is wrong?  How hard can that be IF you know what you're talking about? Why not criticize the probability basis and assumptions? Well, again, because it's much easier for a non-serious propaganda tool to use irrelevant smear tactics than to actually examine the book review and critique it!

But see, hit men and crank disinformationists like Johnny  Mac are only interested in put downs as a tool to distract readers from the truth and this has been McAdams M.O. from the time he darkened usenet JFK newsgroups with his Darth Vader persona.

Long before there was Twitter, Facebook or Blogs, there was something called Usenet where entities known as "newsgroups" sprang up to encourage debate and discussion on any number of issues, topics.  I had observed McAdams putdowns in the (un-moderated)  newsgroup alt. conspiracy.jfk for some months before actually engaging in a one on one exchange with him. This was concerning my REAL FAQ  that I had published in the newsgroup as an antidote to a pro-lone nut FAQ by frequent poster John Locke.

In one particular and unforgettable confrontation, McAdams complained about my reference to Jackie “climbing over the limo trunk” in an effort to retrieve part of JFK’s blown out skull fragment (later inferred to be the Harper bone fragment retrieved by William Harper). He insisted "she wasn't climbing over anything" to which I then replied, "Ok, let's say she's moving across it to the rear - which shows a frontal shot".  He tried to "debunk"  this as well but a picture is worth a thousand words. And in the one below (from the Zapruder film - frames 313-14) readers can see the FACT of Jackie's trunk motion for themselves: 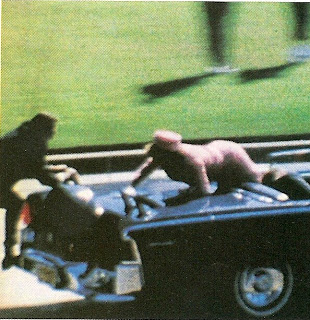 Now really, if a guy can't even admit reality when it's staring him in the bleeping face, why would one wish to trust him on anything?  No serious person should because a man who'd deny reality would deny anything  - and also stoop to say anything to serve his agenda.  I mean this turkey wasn't even able to get the number of years I've been an atheist correct! If he is going to use my atheism against me in an attack mode I'd at least expect him to get minimal facts correct, but even this was too much.

McAdams is such a liar and tool that even when presented with testimony from the "bible" (Warren Commission) he usually rigorously defends, he won't budge if he's been exposed as an ass.   For example, in conjunction with the issue of Jackie going across the limo trunk I added her Warren Commission Testimony (from Volume Five of the special hearings) where she says:


"You know, then, there were pictures later of me climbing out the back, but I don't remember that at all."

And from her secret testimony (excised from original version), op. cit., p. 16:

But once again, this jackass McAdams disputed the WC sources and said Jackie also must have been mistaken, as there was no time at which she climbed across the trunk. SO much for  .John's "debunking" which is largely a matter of denying reality.  The trouble is, when one denies reality there is no way to support his claims.

Perhaps the best information ever assembled on John McAdams (nee, “Paul Nolan”) was put together by Jim Hargrove. The basic thrust was to answer questions concerning McAdams and his background because it so much seems to fit the sort of CIA assets described in the CIA document 1035-960.

When McAdams blabbed (as he did in one forgettable  TIME  mini-interview in Nov. 2013) : "These people think the CIA cares about them. It does not!"

He misses the point. It isn't that the CIA "cares about" anyone personally, but only to the extent it can disrupt their discussions in assorted forums discussing the assassination.  Thus conforming to the words in the CIA document  1035-960 that explicitly state as one primary objective:  "To employ propaganda assets to [negate] and refute the attacks of the critics".

How can this be reconciled with a guy who "just likes to brawl"? Well, if brawling consumes more time than useful communication about facts (like Jackie's limo trunk action) and files (like Oswald's  201-289248 CI/SIG) than one can say the objective has been achieved.

If McAdams has at any time been a real CIA propaganda asset, it makes sense one of his first obligations would be to neutralize any outlets for serious JFK assassination discussion he doesn’t control (like his moderated newsgroup). Thus his intrusions into the un-moderated group shed definite light on his intentions.  Consider, for example, this post from  McAdams, Date: 14 Feb 1997 22:17:02 -0700:

“You buffs have been cooperating marvelously with my scheme to make this group a shambles. And you know the bizarre part? My scheme is not a secret. I have publicly announced it. I have made it perfectly obvious.  I have rubbed you buffs' noses in it. It's blatantly obviously to everybody.”
.John

Now, let’s clear our heads and think about this a bit: Would a normal everyday professor of Political Science be doing these things?  Spending 8-12 hours a day on usenet newsgroups to sow chaos?  Would he be bragging about leaving a Usenet newsgroup a “shambles”?  It doesn’t add up.  Any real prof worth his salt would be working on research to submit for publication to a peer-reviewed journal, not acting the part of an overgrown adolescent  (with anger issues)  for most of every day!


Jim Hargrove, in his “McAdams FAQ” provides the Charter Policy written by McAdams himself for his own moderated group. Reading its first paragraph sheds a lot of light:

This group will be for the purpose of providing an area for serious discussion and research of the assassination of President John F. Kennedy. The group will be moderated to prevent the noise and chronic personal attacks which have plagued alt.conspiracy.jfk and made it nearly useless as a vehicle for intelligent research. Questions surrounding JFK's death have made this one of the most talked about and controversial issues of our generation. This will be the one usenet group which deals seriously with this important topic.


But as Hargrove observes:

“One supposes that since the noise and chronic personal attacks which have plagued the alt.conspiracy.jfk group were and are part of McAdams freely admitted plans to turn the group into a shambles, the moderated group can only be seen as his personal vehicle for selective manipulation of content”

Which is totally logical, and again, it comports with CIA doc. 1035-960!  Hargrove then quotes McAdams from a letter written to The Milwaukee Journal-Sentinel:


Social Research, or ISR, which itself  has been documented
as a recipient of “spook” (e.g. CIA) research grants.

Those who prefer to demur to think about this need to read Chris Hedges, 'Empire of Illusion'.

"Psychologists, in and out of government, have learned how to manipulate social behavior. "

He goes on to note that such manipulation has as its primary objective an adherence to conformity, especially of thought. (The cult of "positive psychology" is particularly involved in this, but psychologists are also part of the CIA's ongoing psych agenda, as first demonstrated in "Operation Mockingbird")

Clearly, McAdams - his mindless minions and his pathetic pseudo-history site - are part of the axis of the "unspeakable" ,  using the term from James Douglass book, JFK and the Unspeakable. Douglass notes it was originally coined by the monk,  Thomas Merton, to refer to the unspeakable evil of deliberate denial of the truth. In this case,  behind one of the most dastardly crimes ever committed - and against we, the American people.

John McAdams has a lot to answer for, at least as much as the climate change deniers who've taken our planet to the precipice by their dissembling. In McAdams' case, he's deliberately helped to smother the truth  concerning JFK's murder, while character-assassinating sundry truth tellers, enabling a festering national sore to persist over a half century.

http://brane-space.blogspot.com/2015/05/educating-australian-bloke-on-basic.html
Posted by Copernicus at 8:45 AM

I was a member (still am,but can't comment on it) of a JFK forum which was frequented by Von Pein and McAdams, I can say it was certainly their intent to 'control' the conversation. There seemed to be several persons there whose intent were the same. Several from foreign countries. That seems strange. Happy to hear that Marquette was successful in firing .John