The "Trial of the Century" Begins - BUT - Should James Eagan Holmes Be Found Insane? 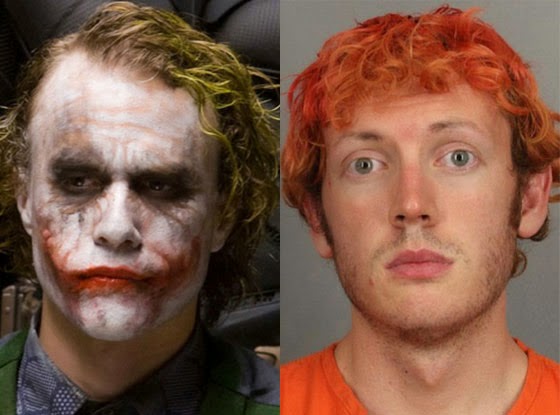 Holmes, right, soon after being apprehended in July, 2012, and left the 'Joker' persona that erupted from his submerged consciousness

The 'Trial of the Century' marking perhaps one of the few times a mass murderer didn't off himself - begins today in Arapahoe County, Colorado. This is the trial of James Eagan Holmes, the Aurora Theater mass killer. The horrific tragedy left at least 12 dead and 58 wounded, and  stands beyond comprehension in the annals of state mayhem, including the 1999 Columbine Massacre in Littleton.. Hundreds of people had thronged joyously into an Aurora Century -16 cinema, to see the midnight premier of 'The Dark Night Rises' only to be greeted by gunfire 25 minutes into the film. The shooter, evidently armed with two large  (0.40 cal) Glock automatic handguns, and a Smith and Wesson MP15 assault rifle, mowed down fleeing theater goers at will, as blood spattered all over the cinema floor. Many of those who survived did so not by fleeing (because the shooter waited for victims to bolt to the exit), but by lying low or playing dead between the seats.


The state and its prosecutors will be out to execute Holmes, but his team of public defenders, including Tamara Brady, Daniel King, Kristen Nelson, Katherine Spengler and Rebekka Higgs - will be out to prove that he doesn't deserve to die as he was insane at the time and didn't know what he was doing.

Do they have a case or not? Let us recall a person cannot be tried for a crime unless he is competent to stand trial. To be competent, he must be oriented as to time and place, comprehend the charges against him, appreciate his legal peril, recall the events that caused him to be charged, and be able to communicate with and assist their attorneys to defend him.

Holmes meets all of these criteria except one - he doesn't recall the events that caused him to be charged. .  Indeed, according to the (UK) Telegraph at the time, Holmes claimed that he did not recall the incident, period.. If that is true, he is incompetent to stand trial- but the state didn't buy it - so he is standing trial.

The issue of insanity remains and whether he knew what he was doing at the time and could be responsible for it. This is where Holmes' public defenders are making their stand, and let us note that according to The Denver Post yesterday (p. 1A) Holmes has already offered to plead guilty in exchange for a life sentence. But the prosecution, determined to exact ultimate punishment, refused. In a way this is mystifying, as it would have spared the affected families from years more appeals and motions - which the defense team has made clear they will invoke. And, let's be clear - being locked away for life in a high security prison - to especially have regrets aroused in later years, is no 'walk in the park'. To then think of what one could have been, and achieved, and then be forced to contemplate the reality.
We consider now the  defense team's claim of Holmes'  insanity at the time. How solid is it?

To recall for readers, The DSM-III, IV, V (Diagnostic and Statistic Manual of Mental Disorders) provides a classification of personality disorders and identifies 'clusters' within which specific disorders can occur. These include:

Each Cluster has discrete tendencies within itself:

(C) -> comply (want from others, but yields only to others' wants to avoid conflict)

As I showed in my several  blog posts in July, 2012, beginning with Deconstruction of a Psycho Holmes' profile and attributes (as we have assimilated them from sundry reports) fit in with the tendencies in the last (C) ensemble and hence fit the profile of a submerged personality, not a schizophrenic. Also, I have had the experience of observing paranoid schizophrenics at the Black Rock (Barbados) Mental Health Sanatorium in the 70s, and NONE of them demonstrated any capacity for mega-violence of the form James Eagan Holmes manifested via his aggressive pseudo-ego,  the Joker.

The question again arises: Why should he not recall the event? As I explained in my 'Parsing of the Submergent Psycho- Part II  his incarceration "has torpedoed the 'Joker' (the aggressive pseudo-ego) who is thereby rendered impotent and inactive. What we are seeing is the first emergence of Holmes' authentic self and the expected SHOCK because frankly, HE doesn't know what the hell happened! After all, it was the pseudo ego 'Joker' that did the deed, then vacated or was vacated. Now, the authentic or previously submerged ego is left to wonder what the hell is going on."

So no wonder he has that vacant, million light years distant stare on his face. I also added (in the same blog):

"His self has been dissociated, and the guilty perp -ego is now gone, fled the coop as it were, to leave the authentic 'James Holmes' ego and self to bear the cost"

In other words, to spell it out, Holmes as his authentic (earlier submerged) self, truly can't recall the incident or what he did. He can't because a distinct, different ego (self) perpetrated it. This aggressive pseudo ego masterminded all the planning, as well as execution, while Holmes' submerged self was unavailable and 'out for the count'. His contact with therapist Lynne Fenton may actually have been a last ditch desperate effort to contact the mother-pseudo ego for some kind of relief. (With Fenton embodying the mother ego). We may never know.

The other real horror (apart from the lives shattered and lost at the theater) may be that the authentic self - who had no clue what was transpiring - may be executed for what his alter ego ("Joker")  did to those 70 people at an Aurora movie theater.

If this sounds nutso, then further elaboration on "simpleton theory" is needed.  Neuroscientist Robert Ornstein ('The Evolution of Consciousness')  has associated specific modes of behavior with particular neuronal sub-assemblies to assign relatively distinct units of dominant behavior. He calls these sub-units "simpletons".

For example, every human {H} will be a composite of a number of simpletons, say:

A dozen or more such "simpletons" may "inhabit" each human brain - and come to the fore if the correct stimulus appears. As each one comes to the fore it represents one side of the Self. Note: this is not the same as saying "multiple selves" as in schizoid splitting or split personality. Each 'self' is legit and valid, since it arises from the person's own neuronal sub-assemblies.

Ornstein points out that many humans "require time to get their simpletons in place" for particular situations. A father of two young children may need a half hour or more after he arrives home from work to "chill out" to allow his "hostile-aggressive" simpleton (say after getting snarled in a traffic jam)  to depart, to make way for the "loving-caring" simpleton that can address his children's needs - without yelling at them, criticizing them or swatting them upside the head.

The consequences of simpleton theory as it pertains to crime - especially as in the Holmes' case - are mind boggling and include two aspects for consideration:

i) The typical human is not one steady persona (identity) but up to a dozen or more living together, with more or less equal power shared unless a disequilibrium event manifests.

ii) For a given misdeed or crime, which simpleton (brain sub-system) do you hold accountable? If you hold the whole person accountable you are perhaps assuming more than is warranted by our current brain architecture and its dynamic interplay. After all, why should one's WHOLE self be held accountable because the Lust simpleton briefly got out of control? Or because one's murderous-rage simpleton did?

In Holmes' case it appears a second "pseudo ego”  was created to defend and protect his submerged, fragile true ego. This pseudo ego then evolved under duress to become the most powerful simpleton in his neural array -  “the Joker”

What duress? Tragically, by the time Holmes’ protector ego (“Joker”) was released, it was already out of control on account of the cumulative stresses on the real self.  Everyone  in Holmes' world then became identified with the introjected parental or authority ego. The warped perception of the defender ego ("Joker") then decided the only way to achieve liberation from the introjected “parent” was to eliminate all who were seen as in its way. In this case, all “normal”, i.e. non-submerged people.

Those whose personalities had not been coerced into psychological lockdown and submergence by a dominating parent. An alternate possibility, perhaps more convincing, is that the retributional "Joker" persona felt outraged and murderously envious of those normal folk (say in socialized units present at the theater) who were not developmentally stymied and hence whose lives were available for rich and authentic experience.

Why would the Ph.D. level have been the one that finally triggered release of Holmes’ Joker? I suspect that Holmes, lacking an authentic personality, was unable to deal with the extraordinary research demands at the Ph.D. level which necessitate originality. I mean, even if the thesis advisor offers you a thesis subject, you still must have the ability to carry out an original theory! It’s not simply like piling up As and making “honors” at lower levels. No real originality is needed to make the "Dean's List", after all. Even brilliance, so-called, doesn't assure originality at a high research level! (Aside: we know from a Denver 7 News report  at the time by Keli Rabon that Holmes failed a preliminary oral exam before pulling out of the neurosciences program at the Anschutz campus of University of Colorado. A day later he purchased his most lethal weapon, the Smith and Wesson MP15.  The ego fracturing stress had now been maximized.)

What Tamara Brady and her defense team colleagues need to do, if they wish to have Holmes' life spared, is use simpleton theory in concert with submerged personality disorder,  as a basis for why he can't be held responsible for his actions at the time . This is because a more powerful pseudo-persona gained control of him (owing to his weak, submerged authentic ego).. Hence, his real consciousness was detached from the events which is why he can't recall anything now. In a very literal sense, his real self was an innocent bystander that could only watch as his body was taken over by the secondary pseudo-ego in the form of "the Joker".

I personally doubt this will fly - but it may be the only chance Holmes and his defense team has.
Posted by Copernicus at 7:08 AM