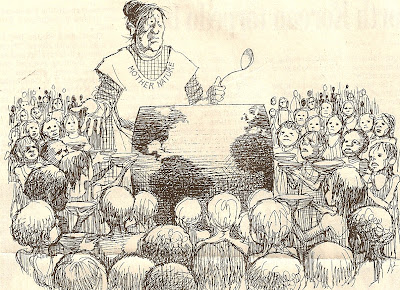 Today, Earth Day, behooves all of us to give serious consideration to alleviating the horrific problems that plague our world, and threaten to make it uninhabitable in a very short term. At the root of all the problems, including fouled water, polluted air and soil, melting glaciers, severe crowding - not to mention mass panic migrations (such as claimed over 850 lives this week) is overpopulation..

Already multiple lines of research are questioning the UN estimates that project a global population of 10.9 billion by 2100. If, however, women - mainly in the poorest nations and without access to contraceptives, have even 0.5 more offspring each  (than projected)  that 2100 estimate could turn into 12.3 billion or even 15.8 billion. The latter pointing to a certain 'Soylent Green' world. Meanwhile, Adrian Rafferty of the University of Washington, publishing in a recent issue of Science, computed there's an 80 percent probability that world population - now 7.3 billion - will increase to between 9.6 billion and 12.3 billion by 2100.  I personally don't buy into that, firmly convinced - as Isaac Asimov once pointed out in a Barbados lecture, e.g.

Isaac Asimov makes a crucial point  concerning overpopulation and carrying capacity at his Queen's Park Lecture in Barbados, on Feb. 6, 1976. He argued  that we either control our numbers ourselves, or nature will do it for us.

That assorted life-destroying forms of blowback (new diseases, mass starvation, antibiotic failure, disasters, wars) will limit that to the carrying capacity by that date. So we may well see only 3 or at most 4 billion inhabiting Earth by then. As Asimov bluntly put it:

"We can either control our numbers, or.....let nature increase the human death rate"

A serious marker is the fact we humans are currently consuming the equivalent resources of 1.5 Earths per year, which is clearly unsustainable. In fact, it is now approaching 1.6 Earths because of the added humans - more than eighty million per year (1 million added every 4.5 days according to Alan Weisman).   The excellent BBC documentary last year on the Earth's population (hosted by Richard Attenborough) entitled: 'How Many People Can Earth Hold?' also provided much needed realistic insights on sustainability and the planet's bio-support capacity.

Attenborough didn't pull punches or mince words, noting that every current major societal, environmental problem:  from clogged highways, to overflowing hospital ERs to crowded schools, as well as scarcity of commodities (reflected in their much increased prices) to fouling of our water and atmosphere and the greenhouse effect, can be laid at the feet of too many people on this planet - each needing food, air, water and energy from the time it's born.  The more people generated the more CO2 produced as a result of their gobbling resources and assorted carbon footprints. While the latter are greatest in the West, because our societies are based on consumption, the lesser footprints also matter in the sense that wars, tribal unrest and religious wars can result in millions fleeing their home nations and disrupting the balance of life in those countries fled to.

Of all the resources, the most critical is water because no one can live without it for very long. Even now, 1 billion people live in water-stressed conditions, meaning that renewable water supplies drop below 1,700 cubic meters per capita. One notable ‘State of the World’ report (2000, pp. 46-47), warned that the ever increasing water deficits will likely spark “water wars” by 2025. As one Mexican water-truck driver observes on the BBC special (while making his rounds in Mexico City): "Not very long from now, we will see wars over water. It will be more important than oil. Even now, we can see how little people think of it and how much they waste it". Indeed!

Attenborough reinforces this observation by noting the water intensity of the various beverages, foods we produce. For example, merely to produce one cup of coffee requires the consumption of 120 liters of water. To get a single can of beer requires 150 liters, and to obtain that 'Big Mac' or quarter pounder takes some 8,000 liters.

And we won't even get into fracking for oil shale, given that each well fracked requires up to 5 million gallons of freshwater which is then despoiled for further use after being re-evacuated as "brine"..If 10 million frack wells are projected world wide by 2020 (according to T. Boone Pickens) then you can do the math and figure out that means 4  million gallons (on average)  x 10 million wells = 40 TRILLION gallons of water lost for human consumption - in a world already running dry from climate change.

Obviously, there is a link between fracking and population since the more people there are the more energy is needed to support them. Whether driving their cars, or using planes for trans-national business, or even their computers. (And we won't even go into how much electronic waste is generated each year by sheer obsolescence.)

There is also the issue of the carrying capacity, or rather the bio-support capacity of the planet. If one divides the total output of bio-productivity (determined in terms of food crops generated per hectare, water volume per hectare, etc.) and divides that by the population, one can get some idea. One expert (seen on the BBC documentary) has calculated that based on his models - if we wanted a planet with equally shared bio-productive output - each human would get TWO hectares. If we inhabited such a world, then the planet might support 15 billion people. One could get this to eighteen billion if one reduced the hectare average to 0.5 per person, or about that for each Rwandan.

The reality is that the bio-productive output is not equal, and using a map of the world, Attenborough showed the divergences, with the UK consuming 5.5 hectares per person, and the USA, 9.5 hectares. Thus, the average USA person is consuming more than four times that which is defined as a fair, equal apportioning of resources across all the numbers on the planet. According to Attenborough's expert, by this reckoning of such unequal apportioning of output, the planet can only hold 1.5 billion people.

Population Pollyannas might argue, 'Well, no problem, just get everyone to reduce to Rwandan hectare consumption level'.  Right, and if you can show me any practical way that would be politically implemented I have a patch of beach in Barbados for you - for free!

There are, of course, more draconian solutions that have been used in over-populated nations, such as India and China. In the former, forced sterilization saw nearly 8 million males sterilized during Indira Gandhi's reign but that had to be stopped on account of massive public outcry. Then China, trying to escape from its famine-ravaged past,  enacted "one child only" laws with serious sanctions. While people may seethe at such a law, they enabled China to achieve economic superpower status within a generation and now compete directly with the U.S. As Attenborough notes, if that law hadn't been enacted China would now have 400 million additional people and still be at the mercy of famine from too few grains, foods or ability to import them. Nor would it have the military and civilian infrastructure it displays today - including for alternative energy.

The U.S. doesn't need such draconian methods-  yet-   only minor tweaks to its tax code. Taking away the child tax credit, or having a sliding scale of increased taxes when people have more than 2 children, while giving credits when they adopt more kids in need is one possibility. The problem is, the U.S. is already overpopulated in terms of the resources it can deliver for 315 million people.

How much do you know about population-related issues? Test yourself with this quiz: