Will The Will of the Voters Be Respected? Or Will the Feds Snuff It Out? 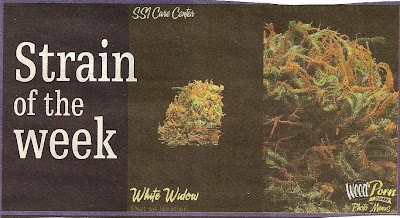 One of the frequent adverts appearing in weekly Independent papers for medical MJ. Now that Amendment 64 has passed, for the use of recreational pot by 2014, will the Feds respect the voters' will or spit on local democracy? (Note: this applies also in state, which passed a similar amendment.)


As Amy Chua once observed in her strirring book ('World on Fire') about the West's fetish and yen to spread democracy to the world at large (especially to Muslim nations), you have to be prepared to live with whatever the result of the democratic outcome - irrespective of how much you may despise it. If you don't, then you're a hypocrite, who preaches democracy when it's convenient but rejects it whenever the result doesn't suit your fancy. Hence, when free and fair  elections were actually held in Lebanon some years ago, and Hezbollah prevailed, the West needed to shut the hell up, and not carp about a result that it had to know was at least a finite probability.  Again, if you are pro -Democracy, you are obliged to be consistent, not favor it only when your outcome is likely!

Now, fast forward to the recent U.S. election, and despite the skylarking of late night comedians about "Rocky Mountain Highs", an Amendment (64) has been voted on and passed in Colorado which allows citizens the recreational use of marijuana. This applies to all adults 21 and older, and is due to take effect in 2014, with recreational shops opening in addition to the already existing medical marijuana dispensaries.  Aleady the Feds appear to be getting nervous, though they shouldn't be - the PEOPLE have spoken after all.

As I noted in an earlier blog on this subject: http://brane-space.blogspot.com/2012/09/feds-need-to-back-off-on-colorados.html  the Federal government needs to back off and get a grip. The Ninth Amendment of the Bill of Rights, after all, ensures unenumerated rights exercised by citizens. These are rights not specifically laid out or mentioned in the formal Constitution. In the case of Colorado Amendment 64, the state's citizens - by a 55% -45% determination, approved of a state constitutional amendment allowing for the recreational use of MJ. As I noted in the previous blog, this is not done via "States'  rights" since technically states have no rights, but rather exercised prerogatives. (see e.g. A Necessary Evil-A History Of American Distrust Of Government, Simon & Schuster, 1999, by Prof. Garry Wills ) Hence,  it's been done via the state prerogative of a citizen ballot issue, exercised from the natural rights of the state's citizens.

If then the Federal government were to barge in and stop it, under whatever ruse (say arguing that the law's retail sales section violates the U.S. Constitution because it "frustrates federal drug laws") then the federal government  (which like the states possesses no natural rights) is effectively abrogating the rights of Colorado's citizens. More to the point, it's asserting that its federal prerogative trumps the citizen's natural rights! But as Prof. Wills has noted, under no true constitutional premise can a prerogative - of either state or federal gov't - trump citizens' natural rights. If it does, one no longer has a true democracy or arguably even a republic!

Now, for the record, let me make clear as I have before, that I have no "dog" in this issue or fight. I have never used MJ even to simply pre-puff minus inhaling. My concern is not one out of any objective to get hold of or use pot (which I could've done to abate my cancer treatment symptoms - but never did) but rather the state's adherence to ballot measures, properly administered and voted upon. This is irrespective of whatever federal laws there are, which as I've also noted, are mostly there to protect Big PhRmA and the alcohol industry.  If corporate handouts, lobbyist interests were made more clear and transparent, it'd be seen this isn't an issue of kids getting "hooked" or any morality or legality but rather protecting the nascent corporatocracy.

Thus, pardon me while I howl with laughter on reading (actually in today's issue of The Barbados Advocate, p. 8) that former NIXON Drug Czar Robert Dupont "welcomes a confrontation". He basically says: 'Bring it on!' Are you kidding me?  Like all the other Nixonians (think Haldeman, Ehrlichmann, Chuck Colson et al and recall Nixon was impeached) he favors "confrontation" and opposes any legalization. He also says (ibid.): "I think it's time to resolve it".

Indeed. But HOW? In whose favor? If in favor of the federal gov't then essentially citizens wasted their time and effort in casting ballots for the measure, and democracy is spat upon. The gov't dislikes yet another outcome of democratic choice, boo hoo. And moreover, it does this to a state that desperately needs tax revenues (e.g. for educational funding) and so would plausibly terminate a business that could raise $100 m in annual revenues by 2017, this in addition to the $171 m in revenues already raised yearly by medical MJ dispensaries. So let me get this straight, if Dupont's spiel is to be believed (and btw, why is he even being quoted? He can't be part of Obama's DOJ!) the federal government floating in a sea of red ink is prepared to oust the means for a blue state to dig out of its own red ink - because it doesn't like the means of doing so? Gimme a break already

But the question of implementation remains with the need to assure the citizens' will is respected (as Gov. John Hickenlooper originally declared - after he initially beseeched voters not to 'overload on Cheetos') whle the feds' most ardent drug enforcers (likely still retained Bushies from 43's admin.) don't get their pants in too much of a twist over it.  According to today's Denver Post ('State Must Set Regulations' , p. 4A) Mr. Rob Kampia, the executive Director of the Marijuana Policy Project,  "will try to negotiate with the federal government on implementing the measure" and the emphasis will be on finding a method "least offensive in order to avoid a federal crackdown".

Meanwhile, a savvy reader in today's Post (a Dan Danbom, p. 30A) writes:

"I think we should follow the lead of the states that decided to 'opt out' of the federal health care law...and simply opt out of the federal drug laws that criminalize marijuana."

Maybe, but it would do to remind Mr. Danbom that the feds would likely then try the gambit invoking the Commerce clause, i.e. the law's retail sales section violates the U.S. Constitution because it "frustrates federal drug laws".  What I see then, is maybe the U.S. drug laws are the problem and need to be changed. All they're doing now is massively adding to our national debt by forcing the incarceration of tens of millions for petty drug "crimes" and thereby wasting resources that could be going for education, infrastructural repair or other more pressing needs. Again, it's a matter of national priorities! In the same way, our nation can't be sustainable if it keeps pissing money into the military-industrial complex, it can't be sustainable if it keeps pissing billions into the drug enforcement- prison industrial complex. This isn't exactly rocket science.

In the end, the most pragmatic and insightful take may be that of Denver Post columnist Vincent Carroll ( 'Come On, Governor, Defend 64'  , Nov. 8, p. 21A) with whom I normally disagree - except in this case when his (libertarian) and my (liberal) instincts coincide:

"Speaking of retail and cultivation faciities, there are already more than 1,000 in Colorado - handling the same product that would be sold under 64. If the feds can tolerate those operations, they can tolerate what voters approved on Tuesday as well."

Finally, it bears repeating that Obama won a close race in Colorado thanks to a preponderance of youthful voters who also came out to support Amendment 64 (by 60% to 38%). By betraying the exercise of their voting rights, Obama and his DOJ could well lose Colorado in future national elections for the Dems, turning it back into a Red state as the youth stay home. ("Why vote for those bums if I just get betrayed?")   In any future close electoral vote, such a loss would be critical. (For example, had Obama lost OH, VA and FL, then simply picking up Iowa, Wisconsin and COLORADO would still have given him 272 electoral votes.)

Yes, as The Advocate noted, Obama also has to contend with the "law and order" types who want to maintain MJ crackdowns. But a peek at the voter profiles-demographics in CO will show him that those types, who were beaten in the 64 choice, are mainly old white men, walking-talking bleached out fossils. The same demographic that basically lost Tuesday's election! Why then back a loser, or losers?
Posted by Copernicus at 11:46 AM