Of "Fiscal Cliffs", False Narratives, and Being "Shackled in Chains" 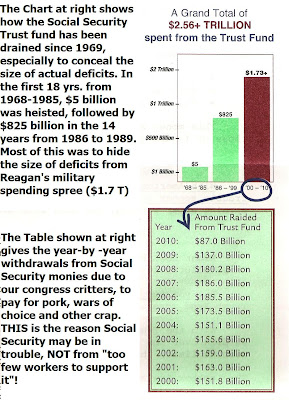 The genesis of the REAL fiscal cliff is captured in this graphic. It shows the extent to which government has plundered the Social Security surplus over the years to pay for "wars" of choice as well as mammoth tax cuts. The BOGUS "fiscal cliff" is the one that Neolib pundits are hectoring us about - regarding returning the Bush tax cuts or else.... If we follow their lead,. we will all be in "chains" - economic chains of need, scarcity and twice the poverty.


Where to begin? So much piffle, bunkum, baloney, faux outrage as well as false narratives now circulate in the political memosphere that it almost makes one’s head explode! Let’s start first with the fake outrage as the Repukes squeal like stuck pigs after Joe Biden’s remarks yesterday of ‘Y’all will be in chains!” Hey, maybe his accent was amiss, but the metaphor held the truth! Sometimes in order to drill truth into brains already co-opted by PR as well as distracted by cell phones, ipods, etc. one has to bring some heavy duty metaphors.

Let me start with the Chains thingie first:

Here’s the deal, if people in this nation choose to elect the Romney –Ryan Axis they WILL be in chains! In several issues The Economist has exposed Romney’s plan to “unleash” Wall Street and its investment banks again, including allowing them to use over the counter derivatives called credit default swaps – the same entities that brought our financial system almost crashing to a halt in 2008 and cost middle class earners nearly $5 trillion in lost money in their 401ks and IRAs.

In addition, the "unshackling" of the banksters will also permit ordinary commercial banks to once again play with your hard-earned money and emulate the investment banks in purchasing default swaps, inverse only strips, inverse floaters and other “toxic waste”. What do you suppose will happen when all those schemes go belly up as they surely will? Another massive bailout? Maybe but maybe not, and you just lose your money and end up eating catfood the rest of your days. If as FDR said, “necessitous men cannot be free men” then for all intents and purposes you ARE IN CHAINS!

Oh, and if Romney implements the Ryan Budget? Same deal – you end up in “chains”, either directly as seniors without any decent health care, or as their offspring, having to care for your mom and pop since they’ve lost their independence and dignity. By any definition “being in chains” is a good metaphor- for both needy oldsters deprived of their security and dignity or the younger generation. And don’t buy for a second that seniors will receive as much as $15,000 a year in vouchers as ABC News ‘Reality Check’ tried to make out last night. If you get $8,000 it will be a wonder, and it won’t buy diddly or squat, nor will any private insurer take you on as noted already by. As Economics Professor Fiona Scott Morton aptly put it (TIME: ‘The Market Can’t Cure Medicare’, May 2, 2011):


She concluded by saying that oldsters will  have little other choice than to die, invoking the cold-blooded term "demand shedding".  Fuck, the Nazis couldn't have done better.


WOMEN in CHAINS:
Then there’s the prospect of American women in chains, since up to now the Nazi blackheart Ryan’s plan for women hasn’t been circulated as much as his budget plan or “Path to Prosperity”. Fortunately, we have Rachel Maddow (in her show two nights ago) to thank for exposing the dark underbelly of how Ryan plans to implement House bill H.R. 3805 which will mandate ultrasound probe insertion (i.e. medical “rape”) for any woman seeking an abortion. Not only will she be subjected to this probe (also originally advanced by Virginia’s gubernator McDonald last year before women raised a hue and a cry) but she will have to watch it done, and be constrained to listening to a “lecture” by the person doing it concerning the fertilized entity inside her.

Chains much? As Rachel noted, this bill will take Virginia’s original plan to a national level!

Oh, then there’s the Ryan-supported bill designated H.R. 212, which will effectively take the odious “personhood amendments” now circulating in states, e.g. like Colorado, to a federal level. These will officially designate a “person” exists from the time of any conception, even from rape or incest, and provide felony punishments for any attempts to abort it or to use contraception (morning after) as an abortifacent. In addition, H.R. 212 – if passed by a Repug congress, will outlaw most contraceptives (including hormonal based, as well as IUDs) since they act pre-emptively to inhibit the emergence of the “person” that would otherwise be engendered. Also, any ladies that even remotely attempt indirect abortion, say by accidentally falling off a snowmobile or bike, or drinking too much alcohol, will face involuntary manslaughter charges. They indirectly acted to attempt to kill the “person” inhabiting them.

Ladies, think Mr. ‘Blue Eyes’ Ryan looks ‘cute’ or ‘ripped’? Well, so did the women of the former Weimar Republic,  of sundry Nazis and S.S. officials who under the laws of the Third Reich (See Robert Payne’s ‘The Life and Death of Hitler’, 1972) abolished all birth control devices, and mandated births for the Nazi state. Violators faced a spectrum of sanctions, up to and including being dispatched to the camps. (According to my friend, Hans Borchers, a former Wehrmacht soldier whose wife had received threats. She later had to provide a physician’s certificate that she was sterile.)


The POOR in Chains:

The Romney –Ryan Axis of Economic Evil plans to gut Medicaid (the health program for the poor) by halting the existing federal matching system to the tune of $810 billion over ten years. Instead it will leave funding to the states via so-called “block grants’. However, fiscal wonks point out (e.g. in the Washington Post) that even if all the states come out of recession they won’t be able to muster a sufficiently innovative plan to fund Medicaid and up to 27 million will lose coverage, according to the Kaiser Family Foundation.

To see where those chains are headed, consult the sad story of this working woman, Sandra Pico

It is unfortunate that the Left (e.g. Lawrence O’Donnell this morning on ‘Morning Joe’) appears to have bought into the false narrative that there exists a “fiscal cliff” and it will come to pass if the Bush tax cuts aren’t extended by Jan. 2, 2013. As I noted before, there is no such thing and no need to wring hands and weep if ALL the Bush tax cuts are allowed to expire (as they ought to have two years ago). O’Donnell quoted unnamed sources in the administration saying ‘We can’t raise taxes in a recession!’ signaling they’ve taken the Reep tax cut kool aid.

In fact taxes are not being “raised” (if the Bush cuts are allowed to sunset) but rather returned to their rates in the Clinton years when job growth was phenomenal and a budget surplus actually existed by Clinton’s departure. But when Bush got in and implemented his tax cuts and unpaid for “wars” and unpaid for Medicare drug benefits (which went mainly to PhrMA) what happened? Deficits spiked through the ceiling. The situation has metastasized ever since because nothing has been done to halt or sunset cuts that were only intended to last nine years, because of the recognized threat to fiscal health.


As noted in the book ‘The Tyranny of Bad Ideas’, tax cuts are NOT the solution to fiscal health because they only reduce aggregate demand, revenue and savings that are needed later. Including for infrastructure. Nor are tax cuts the solution for job growth, as noted by a Financial Times analysis of the Bush cuts (up until then, FT, 9//15/10)

The REAL fiscal cliff is that which has been generated by ceaselessly robbing Social Security since 1969 as the accompanying chart shows. Also included –in the accompanying table – are the year by year raids that have occurred since 2000 and the amounts.

This is important, as well the past two years of payroll tax cuts (which fund Social Security) given how the Social Security Trustees are now warning the program will be insolvent by 2034, barely two decades from now. This, according to a front page piece, ‘Fund Nears Crisis Point’ appearing in The Denver Post (8/13/12) The Trustees claim that the Trust fund surpluses are “nearly exhausted” and had hitherto “masked the size of the deficit being generated by the rest of the federal government”.


Well, DOH! THAT is what they were used for! That’s where the money went! To pay down on the debt from the so-called absurd “wars” (actually prolonged, useless, wasteful occupations) and the tax cuts! Those hid the real deficits created but at the expense of now seeing the program at risk, with possible automatic cuts of 25% to come in from 2034. (Since the surplus is projected to run out in 2033.)

The article notes that since 2010 the program has been “paying out more than it collects in taxes” – but again this ought to come as no surprise, since we have had stupid payroll tax cuts that past two years that drew down more than $170 b a year from the money that supports the program! See also my blog on this idiocy and why again, the Dems are to blame for falling into this particular tax cut trap for trying to "out-taxcut"  the Reeps. They ought to instead be carefully constructing a narrative to explain how and why tax cuts don't cut it! But then, minus think tanks, this task is evidently beyond their brains and ingenuity.

The true fiscal cliff is known, and it isn’t avoiding recession by cutting taxes again, but returning them to their former levels. Then we will see productivity increase, jobs grow as the authors of The Indebted Society showed. The true fiscal cliff can also be bridged by only minor alterations, that will not cut benefits to the most vulnerable. The best ways include:

1) Simply increase the payroll tax (FICA) threshold from its current limit of about $106,000 to about $250,000. That single move alone, combined with a ‘hands off’ policy would see Social Security able to deliver full benefits through 2047

2) Prevent any “privatization” of the program (as proposed by Ryan) which would require $2 trillion to fund, e.g. in a separate, private (Wall street-based)  accounting system different from Social Security’s..

Will any of our pundits and leaders get it? I do hope so, but I fear too many have had their minds enslaved by the wrong memes, by the “tyranny of bad ideas”…such as tax cuts, tax cuts and more tax cuts. Can we say they are “shackled in chains”?