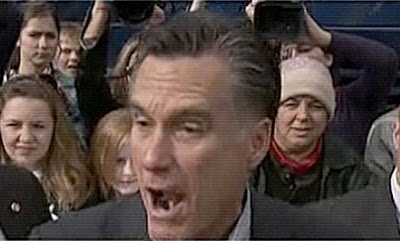 Now that the three day GOP dog and pony extravaganza is finished, partially upstaged by Hurricane Isaac, we can examine aspects of the farce. First, the objective was to convert the Mittster into a “human”, i.e. give him a human face – as opposed to the cyborg persona. For this reason, Mitt’s speech writers worked hundreds of hours on his keynote speech and had him practice it for days - even training his facial muscles to evoke the right emotions!

The entire gimmick was to try to lure “undecided voters” into voting for this clown. I mean, give me a break already! If the undecided really want to behold the “real Mitt” they can harken back to the episodes when he slammed a gay kid’s head into the floor at his posh private high school, or directed a blind teacher into a wall at the same school. Think his character changed since then? If so, I have a beachfront home to sell you in Barbados, for a song!

If you don’t want to go back that far, then go back to a half a year or so ago when, during a campaign stop, Mitt unleashed a hysterical outburst (see photo) at a protestor who merely asked why he let so many go at Bain Capital. Unable to countenance such effrontery from an unshaved Occupy guy, Mitt demanded if he didn’t like it he could “move to North Korea”. Really, Mitt? Just because a protestor challenges your bunkum?

Other aspects of this circus didn’t help Mitt much at all. Clint Eastwood - who used to be what Bajans called a “hard seed” actor- now seems to have descended into some kind of Alzheimers' haze resembling Charlon Heston’s after he gave his “pull this rifle from my cold, dead hands” speech. I mean, Clint! Talking to an empty chair? Get your act together there, Rowdy Yates! March thyself into the nearest Alzheimers' Ward! You couldn't have embarrassed your adopted party any more with that sad and sorry sideshow!

Eastwood’s entrance was by surprise, dislocating the convention’s timing last night and delaying the Mittster by a good fifteen minutes. It was definitely a momentum disruptor. Moreover, Eastwood seems to have delivered his anti-Obama spiel ex tempore accusing Obama of being a “lawyer” (Jeez, that’s bad? Ask those wounded, hurting people in Aurora, CO if they’d like to do without them!)

More hilarious, Eastwood went on to say that lawyers “always look carefully at things, make well-reasoned decisions”, and so on. That's bad? How so, again? If this was supposed to be hurting Romney, maybe Clint needs a proper speech writer next time.

Then there was Jeb Bush, the brother of Dumbya who – with Katherine Harris – used Choice point voter rolls to disenfranchise tens of thousands of African American Florida voters so his brother could win Florida in 2000. For those who want to read the sordid details, get hold of Greg Palast’s book, ‘The Best Democracy Money Can Buy', and read Chapter One. People need to see exactly HOW elections get stolen, especially in the lead up to this one on Nov. 6.

Jeb’s main refrain was for Obama to “stop blaming my brother for your own failures on the economy”. Come on, Jeb, you’re supposed to be the smarter brother. The fact is that the financial meltdown which occurred on Bush Jr’s watch rivaled – in financial terms- the destruction and loss of life that transpired from the terror attacks on 9/11 also on his watch. (He ignored a white paper from national security sources head ‘Bin Laden Determined to Attack U.S.’ given him in August.)

We now know, that the 2007-08 financial holocaust was incepted by the unregulated dispersal of over- the- counter (OTC) derivatives called credit default swaps, and was far worse in terms of economic damage than first estimated. While the year after the meltdown (2009) was initially forecast to have about minus 1.5% growth, the actually recession turned out to be nearly twice that, or minus 3.4%. In other words, the devastation left in the wake would take years to correct. Also, given the negative growth, the stimulus should have been twice the size of the one actually passed.


The ensuing devastation, meanwhile, commenced with the collapse of the housing market, but then extended to the credit markets and even bank- to- bank lending (since no bank knew how many credit default swaps its peers held). Because of the market collapse and credit contraction, approaching what could have become a depression, business activity also contracted and more than 14 million people were left without jobs. Many businesses, on account of no bank lending, couldn't even get enough money to sustain day to day operations for a month. ALL this was on Bush!

To make matters worse, the party that now blames Obama for deflecting responsibility (to Bush Jr), was itself responsible for making matters worse by: a) refusing to allocate a large enough stimulus where it could most efficiently work (i.e. to food stamps, unemployment benefit extensions rather than 1/3 being tax cuts) and b) totally blocking all Obama’s legislative Jobs initiatives in order to make him a “one termer”.

Then, having mastered such total obstruction for political gain, Jeb has the outright gall to assert Obama stop blaming his bro. Well, ok, maybe Obama now needs to extend blame to all the obstructionists in the GOP too!

Then there was Staples CEO Tom Stemberg who led the resident troglydytes in a chant “They just don’t get it”. Really? We don’t get that you all are mindlessly cheering for a guy to be prez who shipped off more than 2 million jobs out of country- and cost 1 million others- using his vulture capitalist company? A guy who screams at protestors to “move to North Korea”, and a guy who absolutely refuses to release any tax returns beyond the absolute minimum.. Returns that would show he has no respect for the country he claims to love, since he keeps nearly all his $400 million gains (from complex money shell games.......errrrr....tax avoidance schemes) housed in the Caymans and Swiss banks.

And this is a guy you expect us to TRUST?

Stemberg then tried to compare Romney’s “effective business mastery” at Bain, with Solyndra, the solar energy company where he claims $535 million was “wasted” by Obama. But this is false analogy, because Obama was not CEO of Solyndra like Romney was of Bain, so had no control of how Solyndra used the stimulus money it was awarded. Most energy experts in hindsight believe that was a good decision, given our alternative energy needs and dependence on oil, and but for a number of Solyndra missteps it might have turned out differently.

Meanwhile, at Bain, Romney used company buyouts then selling them for a song and releasing millions of workers to make his profits. Is this something to cheer about? Maybe for a doofus like Stemberg. (And btw, after that bullshit, I won’t be buying any more paper, protector sheets, or staples….at Staples. )

Romney was, what can I say? Pathetic. Like Paul Ryan, he talked about college students returning home to live with parents, as if this had nothing to do with his party (obstructing Obama’s jobs legislation) Worse, he concealed the fact his own pro-Ryanesque budget includes increasing college loan interest rates to at least 6% which would keep those kids having to pay off loans almost their whole lives – and staying indefinitely with parents.

But what can you expect from a two-faced lying hypocrite? Hopefully enough people will see through this bullshit façade.

Romney then asked the audience:
“How many days have you woken up thinking something really special was going to happen in America?”
Right! But how could anything special happen when obstructionist assholes, egged on by Tea Bagger morons, refused to pass the legislation that would allow those special things to materialize?

Mitt’s choicest pitch was that he’s a “businessman” and that Obama “took office without the basic qualification most Americans have: He’d never worked in a business.”
But is “business” a be- all and end- all attribute, say that can make one more worthy of being a president? G. Dumbya Bush was a “businessman” too when inserted into office in 2000. Trouble was, he wrecked two businesses: Arbusto Oil (which he had to sell when it was losing) and the forlorn Texas Rangers which Bush also had to ditch after piling up humongous debt.
Meanwhile, Romney’s business experience has been devoted to destroying American jobs, either outsourcing them or simply snuffing them via venture capitalist transactions - like he did to Joe Soptic. Oh…..then taking the enormous profits and stuffing them in offshore tax avoidance locations in the Caymans and Swtizerland.
This guy brags about being a “real American”. But with many more Americans like him we won’t have much of a country left, especially if he gets elected. (Blogger Bud Budowsky has, correctly I believe, referred to this coming election as the country's "last stand" for any more social progress or domestic priorities. If the nation goes nuts or punts to elect Romney -Ryan we're not in for a return of Reaganism, but a return of the "Robber Barons".)
What the GOP Convention proved, if nothing else, is they’re still not ready to be handed any reins of power. Not yet, and not for some time to come. If Americans are foolish enough to hand them power, they will have effectively committed national suicide.
Hopefully people realize that! If we have a reincarnation of Bush II, with that sucking sound accompanying it in terms of lost jobs, more lost wars, exploding deficits, crumbling infrastructure, and burgeoning poor, there may not be another chance to recover....ever. Look for our decline to be permanent and .....final.