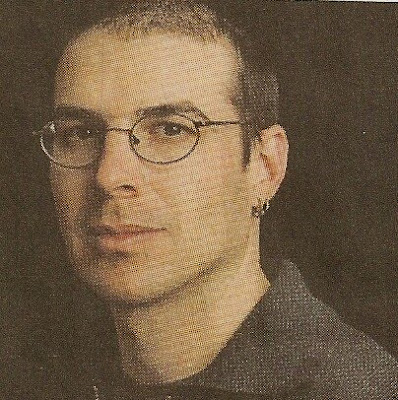 Above: Sci-fi author Paulo Bacigalupi. One of his recent novels portrays humans reduced to bio-engineered artifacts able to eat sand - because that's all the planet has to offer.

Several weeks ago I was astonished to read an interview in The Denver Post Book Review section with science fiction author Paulo Bacigalupi, concerning his Nebula-award winning novel and how critics perceived him as a "downer" - his vision "too dark and pessimistic". To which the author responded:

"Well, if that's your dominant data point, then all the stuff I'm writing is bull!"

Well, his 2009 novel "The Windup Girl" set in a future Bangkok in which denizens huddle in a post-war world ravaged by global warming, heartless corporations and pollution. Then there's "The People of Sand and Slag" in which bio-engineered humans are more enabled to survive a long -since degraded and pillaged Earth, i.e. by being engineered to eat sand- and gradually come to accept their fading humanity.

At some point in the interview, the author is pressed for where exactly he gets his ideas, and inspiration. Especially which sources feed into this miasma and downer dystopia that it seems only a depressive would relate to.

Bacigalupi is forthright, and doesn't waste words via distracting malarkey or humbug:

"Every time you read the news and look at the data, they don't lead anywhere good. None of it says this is going to be better, there will be more energy and more species...I'm not going to write something to console the reader and say everything's all right. We aren't doing anything that's even remotely sustainable"

He goes on to cite "today's adults" for "waging generational warfare through resource depletion, global warming and pollution".

"We're enjoying all the benefits of our highly industrialized society and passing the costs along to our children. It's a giant, extended middle finger to the next generation".

How spot on is Bacigalupi?

The recent lead investigative story on over-population in Mother Jones ('The Last Taboo', May-June, p.25) shows he isn't that far off at all and the dire forecasts of Paul Ehrlich ('The Population Bomb') may only be off by a generation- making Ehrlich a "premature prophet not a false one".

As I noted in an earlier blog, over population is real and a major threat. It underlies all our problems from inadequate energy sources (making risky deep water drilling necessary) to global warming, to inadequate potable water and scarcer foods. Readers who may not have seen the blog can link to it here:

At the comments end of the blog a number of naysayers shared their misgivings and I responded to each in turn. I'd now like to cite more aspects in the Mother Jones piece that reinforce everything I wrote earlier.

First, the much-ballyhooed "Green Revolution" also disguised ominous truths about the limits of our planet. We know this because:

a) the chemical fertilizers that enabled it are destined to run out as Peak Oil hits, and all priorities go to using oil running the industrial machine- as opposed to generating chemical side products like fertilizers, plastics.

b) All the pesticides, fertilizers, weedicides issuing as enablers to the Green Revolution manifested as "enormous downstream costs" in the form of polluted land, air and water. In some cities, the careless runoff - especially of fertilizer- has fueled dangerous outbreaks such as of the cryptosporidium organism that sickened over 400,000 Milwaukeeans in 1994.

Geomorphologist David Montgomery, quoted in the article and author of Dirt: The Erosion of Civilization, has computed that human activities now are eroding topsoil at ten times faster than can be replenished. As he warns:

"Just when we need more soil to feed the 10 billion people of the future, we'll actually have less, only a quarter of an acre of cropland per person in 2050, versus the half-acre we have today, on the most efficient farms"

Of course, many people make much ado over the projected numbers. The UN, for example, projects the planet's population will "stabilize" at 9.1 billion in 2050. But this makes a monster assumption: that the global fertility rate will drop to 2.02 ofspring per woman in the years between 2045-2050, down from 2.56 today. The bugbear is that there are very narrow margins for error. If the world's women average just 0.5 child more in 2045, for example, all bets are off and the world population peaks at 10.5 billion five years later.

Second, as we know farming also requires vast supplies of water, plus growing populations need water to survive - potable water free of parasites and diseases. This is simply not happening. In the ‘State of the World’ report (2000, pp. 46-47), it was noted that the ever increasing water deficits will likely spark “water wars” by 2025.As they note (p. 47):

"When a country’s renewable water supplies drop below 1,700 cubic meters per capita (what some analysts call the water stress level) it becomes difficult for the country to mobilize enough water to satisfy all the food, household, and industrial needs of its population.”

The same State of the World’ report notes at present rates of decline and even without factoring in the worst global warming influences – the number of people living in water-stressed countries will rise from 470 million to 3 billion by 2025. More than a sixfold increase. Add in projected new climate change data and likely effects (see. eg. recent issues of Eos) and the stressed populations increase nine or tenfold. This means even as the topsoil required for adequate crop growth is rapidly declining, so also will be the water to sustain the crops.

Some nitpickers queried this aspect in the comments in the prior blog, and asserted that sea water conversion could be used. But they ignore two things here: i) That assumes enough oil is available to provide the energy needed to execute the conversion to fresh water, and (ii) the water used isn't full of deep sea oil gunk - such as we see gushing from the BP Deep Horizon fiasco. (And some people are even predicting a possible worst case scenario with this - that the whole well and support structures are blown out and all the ocean reserves at that location spew into the Gulf - and beyond).

Barbados currently has at least one sea water conversion plant, but the energy utilization is enormous and an ongoing drain on the island's balance of payments. Just to drive the conversion for a week takes more kilowatts than, for example, the whole city of Denver uses in a day. Thus, extrapolating these devices world wide is something of a pop fantasy, and certainly I can't see it for agriculture.

Other commentators suggested some "technological fix" or other which we can't see or forecast right now. But this to me, is just more 'pie in the sky' - not too different from Pastor Mikey expecting to be born away by angels to his heavenly mansions after he passes. I'd more expect advanced aliens from Tau Ceti to land and distribute free vacuum energy generators to every community in the world!

The hard fact is that the only plausible solution to population overshoot is to decelerate the population growth faster than it's decelerating now, and ultimately reverse it. The success in this will also resolve our most pressing and pathological problems, from food scarcity to water supplies to increasing CO2 and global warming to biodiversity loss.

How can this be expedited? Most efficiently by a combination of mammoth birth control- real artificial contraception - not just the foolish ("rhythm") method of Ogino-Kaus, and coupled with government disincentives to have more children. The first can be expedited by mammoth donor nation support of contraceptives and ancillary devices to all the "third world" nations, but to effectively orchestrate this, the resistant backbone of certain religions has to be broken. That must start with the Roman Catholic Church. Fortunately, in this regard, the recent priest sex abuse crisis has caused millions to fall away - but that is mainly in the UK, Ireland and Germany. We also need it to happen throughout Africa and South America. (India and China have already done remarkable population control in their own nations, though one may fault them for some draconian methods)

In terms of government disincentives, parents must no longer be rewarded for having kids, but penalized. First, there should be NO tax credits at all, especially not now with multi-trillion dollar deficits. Second, every child after two is actually taxed at the rate of $1500/ year. This will make people think once, twice and beyond before going past that "replacement rate".

What we have seen, just looking at the overpopulaton mess, is that scifi author Paulo Bacigalupi is on solid ground in his dystopic vision. I'm sure there might come a time when he becomes more optimistic in his story telling, but I'd believe he'd say "Show me the changes" before he jumps onto that saccharine Pollyanna bandwagon!
Posted by Copernicus at 9:02 AM