"Salvation" on other worlds? 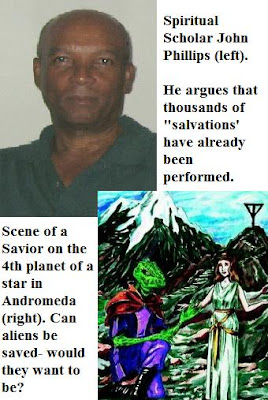 “What a cozy little arrangement, to have the God of the entire universe come down to one minor planet in a minor galaxy and live out his life as a carpenter – who will then “save” all the minions of the planet! “

Davies was getting at the curious improbability of the postulate that an infinite God would descend on one pathetic little dirtball of a world, given a universe tens of billions of light years in extent, and with billions of galaxies each teeming with millions of worlds.

On the face of it, it simply appeared preposterous to the person possessing any measure of cosmic perspective.

But what IF there was an infinite deity, would this sort of thing make sense? This is another topic I took up with spiritual scholar John Phillips in Barbados.


Q. I just read to you Paul Davies' statement concerning Jesus Christ as an incarnation of an all powerful God and incarnating on one tiny planet in a corner of the universe. Does this make sense?

J.P.: Not really. It makes more sense that an infinite deity, assuming salvation was a genuine goal, incarnates on millions of worlds, not just one. To incarnate on only one would suggest that the divine capacity is limited to a single planet and species. Which is ridiculous. For an infinite God it should pose no problem to have as many Saviors as needed. I see no reason why thousands of salvations haven't already been performed on thousands of worlds.

J.P.: One has to think interdimensionally and spirtually here. We're used to perceiving existence on the level of matter only, but there are other levels too. We call the bodies on those who live on these other levels by different names, for example, etheric. Those with etheric bodies are on a level one up from ours.

Q. Are there levels below?

J.P.: Of course! In the great cosmic panorama we have entities, bodies and beings moving in ascending and descending directions. Angels, for example, are highly etheric beings, which is why they can't be seen by us. As I said earlier we can even call these exalted beings. But there are also lower or primitive levels below ours and these include those for the entities we call demons or elementals.

Q. Can you elaborate? Are demons evil? DO they want souls?

J.P.: No, that is nonsense. Demons or elementals are simply creatures fitted for realms of darkness and limitation. If you need an analogy, they would be like wild beasts encountered if you traveled into a jungle area, like the backwaters of Guyana. You might see a ferocious Wild Boar baring fangs or even a jaguar. But these aren't "evil". Their nature is ferocious, they are what they are: predators. Yes, they roar and frighten with their jagged, toothy mouths, huge claws and terrifying eyes, but that is their nature. If you go into a jungle you must expect to encounter rough, wild creatures! If you venture into lower realms, say with your imagination, you may encounter rough or wild lower entities. The wild beasts are doing what they ought to be doing in the jungle and demons do what they are to do at lower planes of existence.

Q. So, if I get your drift here, a "Savior" might more be needed for people unable to control their minds and imaginations, and therefore more susceptible to influences from the lower level entities?

J.P.: This is basically true. Our world is more or less the center of realms, between the upper or etheric and the lower primitive. This means beings like us can be affected from above or below. When we think inspired or higher thoughts we will be more influenced by the etheric entities, like angels. If we gravitate to sensual proclivities, the lower realm will pop through. The role of a Savior then, would not be to "redeem" us so much as to show us how to reduce the influence from the lower realms by elevating our spiritual barometers.

Q. So to use reason or logic, the place or concept Christians call "Hell" might be located or associated with the primitive realm?

J.P. : This is so. One of the best parables on this is in the Gospel of Philip, part of the Dead Sea Scrolls, it goes like this (reads):

"An apostolic man in a vision saw some people shut up in a house of fire and bound with fiery chains, lying in flaming ointment....and he thus spake to them: 'Why are they not able to be saved?' And the overseer replied: 'Because they did not desire it'."

A similar story was told by C.S. Lewis in his allegory 'The Great Divorce'. He writes of a bus that runs daily between Heaven and Hell. The inhabitants of Hell are free at any time to take the bus to Heaven, but they choose not to. They can't stand it, it's too real for them. As one of the inhabitants of Heaven says: 'All that are in Hell, choose it. Without that self-choice there could be no Hell. "

This might be hard to process. Why would anyone want to remain in such a place? But think of walking along downtown Bridgetown streets at night and coming upon a bar. Some may enter and be lured by its red lights, music and dancers. Others will be repelled and walk away. It's the same with Hell.

Why do some choose it? It may well be, and I believe it, that their imaginations and thought become too immersed in the lower levels while alive on Earth. But that fatal attraction carries a price. They become more influenced by the activities and tendencies associated with degraded beings (which we call 'demons') in those levels. Then, when they die and their spirit is released, it seeks to hang around those lower levels like some physical people like to hang around tacky bars and dives. That force of fatal attraction prevents them from moving on to a higher etheric level. So they choose to remain Hell bound.

The purpose of a Savior, to any world, is to elevate and inspire the physical beings there to aspire to more than preoccupation with flesh or fleshly desires, or money, or food, or other lower level appeals. Then, when they die, their souls are more likely to elevate to higher planes than remain Hell bound to the lower ones, populated by the demons and elementals. I should point out here that some, like Edgar Cayce, believe demons are the souls of people who descended to the lower realms because of their attraction to lower things, but chose to stay there.

Q. Is the salvation purpose the same for Jesus on Earth?

J.P. Exactly! His role here was as a teacher and rabbi to elevate our minds and consciousness to look above, not below. He can only point the way, but he can't do it for us. We have to exercise the will to do it ourselves.
Q. Would all planets with sentient life need such a Savior?
J.P. No, only the less advanced forms. Higher consciousness beings or exalted beings would control their tendencies with their minds, or they'd likely have evolved beyond them.

Q. Have you read the book 'The Messiah Paradigm' about an Earth girl abducted and taken to a planet in the Andromeda galaxy to save descendants of abducted humans?

J.P. No, but it sounds intriguing. I'll have to put it on my to do list!

Thanks for your insights, John.