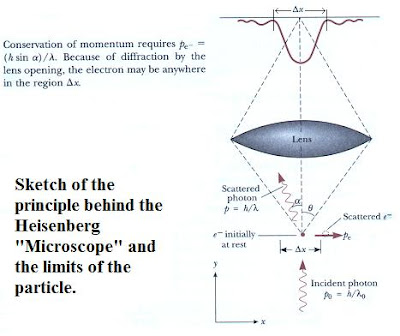 Last year, religious blogger Ander Branderund challenged me on a number of points pertaining to the spontaneous inception of the universe and the role of quantum mechanics in relation to it. Anders, like many, insinuated I interjected complex QM issues merely to baffle with bullshit.
I had to inform him that when I do address quantum mechanics or interject it into theological debates, exchanges (as with Anders ) it's always in a specific context. Not just done for show or as some form of obscurantist device.
As I pointed out repeatedly to Anders, QM can explain cosmic origin and I even cited a paper published in a professional journal, as well as a Discovery Channel documentary (in case the paper wasn’t clear). The problem with Anders, was that the consequences of his potential acceptance so violated his temperamental disposition to a "common sense, lawful universe" that his heads exploded at the thought of acceptance. Hence he rejected the science ab inito and commit the fallacy of ignotum per ignotius.

What I want to do now, is re-focus on some complaints of Anders and others, and try to provide answers to each.
Complaint #1:
“Some say quantum mechanics (QM) refutes religious beliefs
Actually, no one says QM "refutes" any beliefs. How can it when it isn’t a religious doctrine, or counter-dogma to what any religion claims? What quantum mechanics shows, by EXPERIMENT (e.g. electron diffraction) and Heisenberg Uncertainty Principle, is that classical logic has limits which are not applicable to quantum scale phenomena.

When the classical logician asks: “Which hole does the electron go through, the left or right?” he will not be prepared for the answer: BOTH!

Thus, QM doesn’t refute beliefs but rather the extension of classical logic to quantum phemomena. It was for this reason quantum logic was developed.

Quantum mechanicians assert photons ( light ) can take the form of particles or waves . The problem is that waves and particles are contradictory .
But as the late David Bohm noted (Quantum Theory, Dover Publications) the true fact is that they are the same phenomena but exposed at different scales of observation. Thus, a “particle” will be beheld at a lower magnification (say using the Heisenberg microscope – see image) and in specific experiments (e.g. for the photo-electric effect). Meanwhile, a wave or the wavelike property will be disclosed at finer scales. In his book (p. 169) Bohm provides an excellent image of a de Broglie wave associated with an electron. He also shows the scale at which the B-wave is only seen as a “particle” (electron).

The “wave profile", suddenly vanishes when one uses the instrument that brings the particle aspect into view. But there's no contradiction, which is why many quantum physicists use the term wavicle. This usage recognizes the wave and particle forms as aspects of one phenomenon, which can't be willy-nilly isolated from each other.

If Anders had pressed his research further, or actually had taken a QM course, he’d have also been introduced to the Principle of Complementarity which was first developed by Bohr. It states in general that the properties of wave and particle are mutually exclusive and specific to the instrumental scale used. When one observes the wave aspect, the particle isn’t seen, and vice versa. This is often expressed in Poisson brackets (related to the Uncertainty Principle):
[x, p] = -i h/ 2 pi .
In term's of Bohr's (Complementarity) Principle, the variables x (position) and p(momentum) are regarded as "mutually interfering observables" and why only one can be obtained to precision, while you lose the other.

A good illustration of these concepts is a simple coin: it has two distinct sides, heads and tails, but remains ONE coin. No matter how one holds the coin, you can only view one side at a time. It is impossible to view both heads and tails with one view. Analogously, one cannot see wave and particle aspects of an electron at the same time, only at different times.

Complaint #3:
QM overturns natural law and rationality , leaving us with an incomprehensible , uncreated universe . Physics says mass-energy can be neither created nor destroyed but some scientists ( falsely ) claim that quantum particles naturally pop in and out of existence

Truthfully? No one says QM "overturns natural law and rationality”. Indeed, Newtonian mechanics can be obtained from QM simply by allowing the principal quantum number (n), e.g. in the Schrodinger equation, to go to infinity (oo). This leads to conditions of the macroscopic world. QM doesn’t "overturn rationality", it simply asserts that its form in terms of classical logic can’t be extrapolated to quantum phenomena. We preserve rationality, but in a different guise, with quantum logic. Readers may consult my earlier blog on this here:


Re: quantum particles “popping in and out of existence’ – yes, but that doesn’t mean a violation of conservation of mass –energy. Again, the pastor’s poor physics background does him in.
In the case of pair production.we know that a quantum particle (e.g. pi meson ) can appear because of the energy-time form of the Heisenberg Uncertainty Principle:

Where h is the Planck constant of action (6.62 x 10^34 J-s) and delta E is the change in energy and delta t the change or uncertainty of time. The energy can then be found from:

Which of course, can also be converted to a mass equivalent using Einstein’s mass-energy equation: E = mc^2, i.e. change the subject of the equation so: m = E/c^2.

For example, the typical pi meson (call it 'pi') lasts 10^-16 sec (delta t) then vanishes yielding two gamma ray photons in its wake,viz.pi -> gamma + gamma. Thus, rest energy is real energy and is capable of doing work. In the case of the pion above, the total mass 2.4 x 10^-28 kg, is converted to electromagnetic energy. It's apparent "disappearance" is really a transfer from a mass particle to pure energy state.

Many atheists claim the whole universe "sprang" into existence naturally and no Creator is necessary, but this is irrational since all effects must have causes

t isn’t just a matter of some “atheists say…” since I have continually belabored for Anders' benefit the paper from Physics Review D, by T. Padmanabhan, ‘Universe Before Planck Time’ and how it covers the basis via mathematics and physics with no fundamental laws contradicted. but reciting it is now like banging one’s head against the wall. Yet, what else can one do? Anders, e.g.. insists we (atheists)assert that the universe sprang into existence from nothing, but he refuses to examine the actual published paper that shows it.

So, YES, quantum particles DO pop in and out of existence, but not by violating the conservation of mass energy.

Posted by Copernicus at 9:26 AM