Below: Lucifer presiding over the entry of the last two Israeli Jews into Hell. Is it fair that Israel should be used as the backdrop to fulfill Fundamentalist prophecies - then all Jews (except 144,000) dispatched to Hellfire? 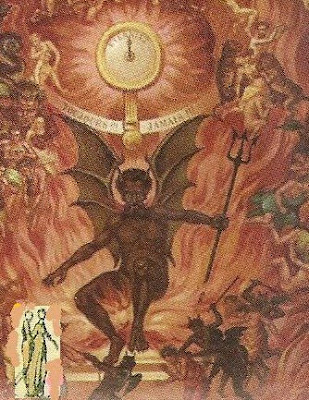 On assorted Christian blogs, especially evangelical, we hear pleas and cries to “come to the defense of Israel” after the Gaza incident in which 9 people aboard an aid flotilla were killed by Israelis boarding the ships. According to Edward Peck, former Reagan appointee & ambassador to Iraq, interviewed on MSNBC last night, he saw no evidence of malicious intent at all on the part of the people in the ship he was on. He insisted that he and cohorts all had assumed passive defensive positions - a la Gandhi's followers when smacked by British truncheons when they protested the salt factory.

In some evangelical blogs headers are actually visible which scream:

“Israel, the Apple of God’s Eye”


Okay, now a serious question, evangelistas: If that is so, then why after Armageddon are only a meager 144,000 Jewish souls destined for salvation? HUH? DOUBLE HUH???

Yes, you heard it right. While the evangelicals huff and puff and praise Israel, they only do it for their own selfish reasons and rationalizations: because it is to be (according to their Bibles) the stage where Armageddon plays out and J.C. Superstar returns in his illustrious “Second Coming”. Believe me, if Israel lacked eschatological import, the Fundies wouldn't give it the time of day, and indeed, would have it listed under assorted "False doctrines" pages of their blogs. The only reason they pay any attention is because of biblical references that allegedly support a 2nd Coming.

According to the CIA Fact Book, Israel now boasts just over 7,150,000 people. If Armageddon were to occur today this means more than 7 million would enter the fires of Hell after it was all over. Some “Apple of God’s eye”. If Hell be the fate awaiting those considered the "Apple of God's eye" one wonders what this insane fundagelical divinity has in store for those who aren't!

In a memorable final Phil Donahue show on MSNBC in 2002(still have it on videotape), he included people from five major religions, including the head of the Southern Baptists, and a leading Rabbi. When Donahue brought up the thorny issue (which most evangelicals prefer to sweep under the rug) of what happens to the Jews when Armageddon is all over and the "Antichrist" (sic) is defeated, the Southern Baptist fundie didn’t mince words:

“Most will be bound for the fires of Hell, because it is appointed that only 144,000 shall be saved. “

Donahue’s eyes nearly popped out, as did the Rabbi’s who then entered into a furious exchange with this bigot, prefaced by the words:

“How DARE you! How dare you decide to dispatch Jews into afterlife fires when over 6 million have already been roasted in Hitler’s crematoria!”

“I don’t decide that. It’s the word of the bible, not mine. Unless a man be born again and believe on the Lord Jesus Christ he cannot enter the gates of Heaven. Since nearly all Jews reject Jesus as Savior, they can’t enter the heavenly kingdom”.

“Yeah, but it’s all fine and dandy that Israel be used as the setting for Armageddon in the Valley of Megiddo. Once Israel fulfills its biblical prophecies, then I guess it’s perfectly okay to send all the Jews to Hell…..oh, except for the special 144,000. And by the way, what’s so special about them? Why do they get a heavenly pass and not the others?”

The Southern Baptist was speechless. Or rather, perhaps so dumbfounded he wasn’t able to respond.

My take on the Israel Gaza incident is basically that Israel doesn’t get a free pass, does not get to pass ‘GO’ over everything it does. (Which sentiment Peck shared.) However, that is a separate issue from the one at hand: that IF you are going to embrace Israel as the “apple of God’s eye” you damned well better do it the "whole hog" otherwise you’re a damned hypocrite.

That means, to me, you not only come to Israel’s defense NOW in the here and now – but you also assure, I repeat ASSURE – that all the Israelis who graciously gave their nation to you for the fulfillment of your stupid prophecies (or so you claim) get a pass into eternity.

Again, let me make it clear for the weaker-minded, this has nada to do with whether I personally believe in or accept "Hell", I don't. I regard it as a perverted and odious myth employed by bullies to play the fear card - since they're so bereft of reason they're unable to make their case by logical persuasion.

My point is that within the Judaeo-Christian context of beliefs - and specifically those embraced by fundies, it appears disgusting to putatively consign to Hell (based on odd bible verses) the very people you need to fulfill your Armageddon prophecies.

Shouldn't you at the very least allow ALL Israeli Jews to be saved to your precious Heaven? I mean there are about 44 million Jews in the world, isn't it just (assuming Israel is the "apple of God's eye") to at least save the 7 million in Israel? A reasonable person would think so, but then fundies have never acted or thought on reasonable levels.

As the Baptist preacher on Donahue put it so (in-)delicately:

"I sympathize with all the Jews in Israel and elsewhere that will burn in Hell for eternity, but that judgment isn't my call, it's God's. If they want to be saved there's still time. They just have to accept the Lord Jesus Christ as their personal Savior".

But, fear not Israelis! If indeed you're bound for Hell, make no mistake you'll be in good company, including with atheists, Catholics and many spiritual seekers and scholars. It may well be that "Hell" (the Fundies' version) turns out to be a kind of "Heaven" for the rest of us who aren't knuckle draggers. Meanwhile, the Fundie bigots will just have each other to share their clouds with and strum harps for all eternity. I can't think of a worse outcome, even in the most horrendous horror flicks I've seen.

Posted by Copernicus at 9:20 AM

“Most will be bound for the fires of Hell, because it is appointed that only 144,000 shall be saved. “

I saw the same program and was appalled. As Donahue also told the Baptist, it is total hypocrisy to wrap little Israel in your arms because she happens to fulfill your little pet prophecies, then condemn most of her people to Hell.

Total cognitive dissonance! But I will be interested to see what excuses PM comes up with to justify his schizoid attitude, calling Israel the 'apple of God's eye' on the one hand while he calmly justifies sending most of her people to Hell on the other.

You built a perfect mind trap for the egomaniacal pastor and I seriously doubt he can escape. Oh, unless he changes the meaning of words again and insists "Israel" really means just the "Saved".

I just checked PM's blog barely two minutes ago, and it looks like he's dodging the whole issue. All he has is a bunch of his usual bluster and baloney about how the Bible is the "final authority" and supersedes man's.

Obviously, this totally confirms what you said about the typical cultist, demanding the sacrifice of others' decisions, judgments, self-determination...whether to a book or person.

Mike doesn't even realize it but he's the living clone of Jim Jones!