Tribute to a Skeptic and Polymath

Below: The late skeptic and former Fundamentalist- Martin Gardner. 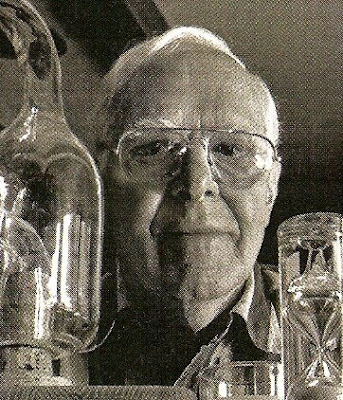 It is a joy to remember one of the most formidable skeptics we've seen in the U.S.: Martin Gardner, who died last month at the age of 95. Gardner wrote more than 70 books, tackling a variety of topics, but particularly many to do with math puzzles and conundrums. (His mischievous puzzles likely paved the way for the current Sudoku craze, not to mention tredoku and futoshiki).

Gardner's most recognized talent was as a popularizer of extremely difficult science topics, from relativity to basic mechanics and quantum mechanics. Probably there hasn't been such a wide ranging popularizer since Isaac Asimov. And like Asimov, Gardner earned the respect of serious thinkers, from Noam Chomsky to Stephen J. Gould and Robert Penrose.

One other curious and unusual aspect of Gardner, apart from his ability to simplify esoteric fare, was his background. He grew up in a strict fundamentalist household, where questioning things outside the Bible wasn't tolerated. As we know, to the diehard fundie independent thought is the one common enemy and inevitably associated with "Satan".

Thus, it was remarkable that Martin abandoned his fundamentalism, lock, stock and barrel by the end of his teenage years. The proximate agent for his leaving the fundies behind? He acquired a voracious reading habit- gobbling up everything from Kant, to Plato to the science fiction of H.G. Wells. As Gardner read, and the more he read, the more convinced he was that the KJV he'd been living by was merely a corrupted compilation of exaggerated fairy tales.

With that rejection, there arrived the simultaneous reverence for rationality, and logic. Gardner made these tools his stock in trade as he studied Philosophy at the University of Chicago. Later, in the course of his jeremiads against pseudo-science and assorted foolishness disguised as fact, they served him well.

With efficiency, grace and no small amount of humor, he easily punctured and gored all the superstitious sacred cows of the culture, including: Creationism, "Armageddon", Astrology, spoon bending and Scientology. He even ventured into the realm of macro-economics, easily dispatching the idiocy of Arthur Laffer and his "Laffer Curve' - which subsequently became the basis of Ronald Reagan's "voodoo economics" -aka, supply side bunkum.

In the end, Gardner had little tolerance for any bunkum, no matter what window dressing of superficial appeal it offered. With the razor of reason he was able to flay the layers of nonsense off one by one and expose the final product as baseless, and unworthy of mental energy.

Interestingly, in his later years Gardner expressed a belief in God, which kind of astounded his millions of followers who'd always assumed he was an atheist. Gardner intimated his belief was "based on an emotional turning of the will unsupported by logic or science".

However, like my friend John Phillips, Gardner's God was not the comic caricature of the Bible but a more sublime entity which has the potential to use energy creatively.

In other words, to the fundies whose faith he abandoned as a youth, he'd still be regarded as littler better than an atheist - and due for broiling or barbecuing in the same "lake of fire".

Of course, Martin is laughing uproariously now, likely noting that - like ghosts - the Hell of the fundies doesn't exist!
Posted by Copernicus at 10:01 AM