African in midst of locust swarm. Close up of the desert locusts gobbling food.

The recent news in The Wall Street Journal of the desert locust plague in Africa and neighboring nations is deeply concerning.  Mainly because we know it will affect the food security of millions, and is also another offshoot of climate change.

In Kenya, police facing the country’s largest outbreak in 70 years have actually fired machine guns and tear gas into swarms in an effort to prevent them from consuming fields. (The original methods that used to work was banging om=n metal buckets.)  Meanwhile, Ethiopia is spraying pesticide from small planes to displace hovering throngs, though swarms have forced passenger jets in the region to make emergency landings.

In Eritrea and Djibouti, teams numbering in the hundreds are chasing swarms with hand-held pesticide pumps and truck-mounted sprayers.  The creatures are shown in the accompanying images as well as a map  (below)

showing the extent of the current plague and the nations affected by the infestation.
For reference, we know desert locusts are the most devastating of all locust species and can consume their weight in food each day. Swarms potentially containing hundreds of millions of insects each can travel over 90 miles a day; a swarm the size of Manhattan can consume as much food in a day as the population of the New York tri-state area.  This according to UN Food and Agriculture Organization (FAO) locust expert Keith Cressman. Some swarms are far bigger..
If the outbreak isn’t controlled and conditions remain favorable for breeding, it could reach 30 countries in Africa and Asia,  Added  Guleid Artan, the climate prediction director at East Africa’s Intergovernmental Authority on Development, quoted in the WSJ piece:
"This is a more serious emergency than we had earlier anticipated. More locust swarms are entering northern Kenya daily and at this rate they could soon spread into Uganda and South Sudan.”
How is the latest locust plague related to climate change?
We know extreme weather is behind the infestation, given that East Africa experienced abnormally heavy rains late last year.  These caused flooding of regions that are normally semi-arid. Such conditions are favorable for locust breeding, and the hives can grow substantially if not disrupted.  This itself is a challenge in cash-strapped countries contending with insurgencies and other security challenges. Continued breeding in some areas is already deepening the crisis.
Swarms entered Kenya in late December from Somalia, where security challenges had left a large breeding area uncontrolled. When the swarms crossed the border, relief officials said, residents in the Kenyan county of Wajir started shouting, whistling and drumming to scare the insects away.
The efforts forced the initial swarm to retreat. But a day later, larger swarms returned, clouding the sky. Police units fired tear gas and bullets but the locusts didn’t disperse. Locusts have continued to spread; this week, the swarms moved to around 90 miles east of the capital, Nairobi, alarming the region’s corn and fruit growers. 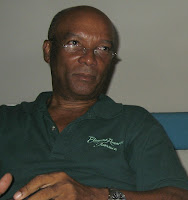 John Phillips- suggests using sound as a weapon.
What can be done now to control the pests?  Obviously machine guns won't work as the bullets will mostly miss the dodgy critters.  But when I spoke with Bajan biologist John Phillips (a former colleague of mine at Harrison College) he suggested high -pitched sound might be used on the beasties.  According to Phillips:
"It may require some tweaking to get just the right frequency, but a loudspeaker mounted to a generator machine that can produce and sustain such a sound  might do the trick  - and disperse the pests, sparing the indigenous crops. If that doesn't work maybe incorporate them into the human food chain.  They're loaded with protein, after all. "
However, I don't believe even 50 million hungry Africans would have the appetite to eat these crusty critters - especially in swarms.  Just saying.  Phillips' other (sound) remedy may be worth a try given that right now aerial spraying is the only effective method to reduce locust numbers, according to the U.N.,  However, it is expensive and dangerous in areas where there are militants operating, and has thus far covered less than a third of affected areas, according to East Africa’s Intergovernmental Authority on Development.
In Ethiopia, Africa’s second-most populous nation, locusts have invaded around 700 square miles of cropland, pastures and forests, in the country’s largest infestation this century. Less than 10% of the affected area has been sprayed, according to FAO data.  Ethiopia and Kenya need at least two more spray planes, while no such control measures have been possible in war-afflicted Somalia.
Whatever the solution or response it needs to be done soon. If unchecked, the locust swarms could grow by 500 times by June, when drier weather is expected to slow breeding, according to the FAO.  By then, millions of Africans could be starving.
Posted by Copernicus at 9:26 PM