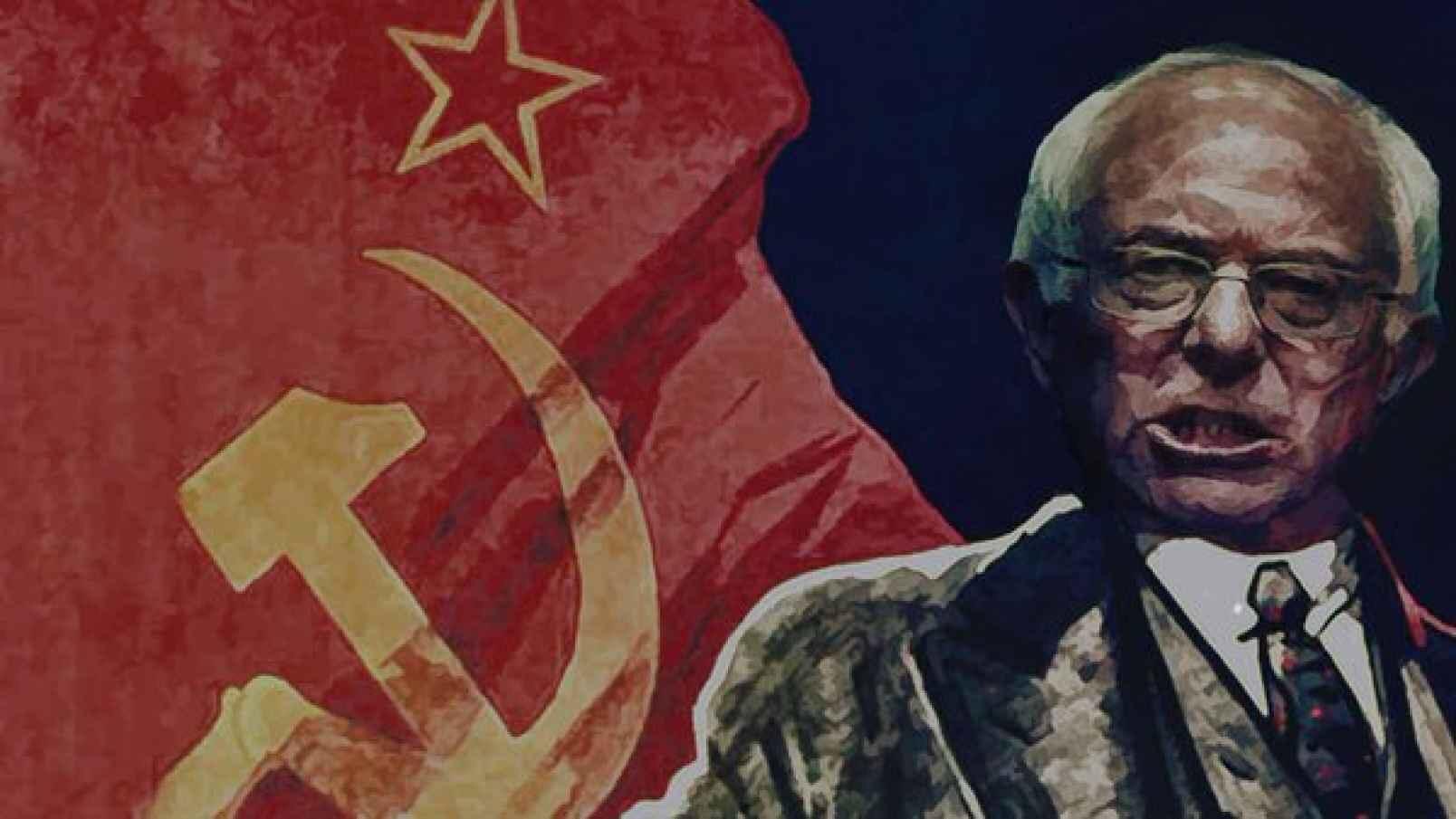 One example of the batshit insane hysteria surrounding Sanders, which conflated his democratic socialism with communism.

"Because we are perpetually battling for self-preservation. Life has become a kind of brutal combat to the death. For jobs, for healthcare, for money, for the tiniest shreds of resources necessary to live. We wake up and fight one another for these things, over and over again. That is what our lives amount to now — gladiatorial combat. Meanwhile, elites and billionaires sit back and enjoy not just the spectacle — but the winnings.  People who are battling for self-preservation can’t take care of anyone else. If I ask the average American to consider paying for their society’s healthcare,education, elderly care, childcare, increasingly, the answer is: LOL.

What does the average American aspire to be, do, have? To be rich, powerful, careless, selfish, and dumb, now, mostly. We don’t, as societies or cultures, value learning or knowledge or magnanimity or great and noble things, anymore. We shower millions on reality TV stars and billions on “investment bankers.” The average person has become a tiny microcosm of the aspirations and norms of elites — they’re not curious, empathetic, decent, humane, noble, kind, in pursuit of wisdom, truth, beauty, meaning, purpose. We’ve become cruel, indecent, obscene, comically shallow, and astonishingly foolish people. That’s not some kind of jeremiad. It’s an objective, easily observed truth. "  -  Umair Haque, essay, 'This Is How A Society Dies'

"I personally believe Bernie is as far left as you can go, but hey, it's for the greater good!"   Jessica Slovak, an RN who caucused for Bernie Sanders 4 years ago, as reported in Denver Post, Sunday,  Feb. 16th, p. 5A.


"Someone has to stop Bernie Sanders!"  "No one is doing enough to stop Sanders!"   "Republicans are salivating over a Sanders' nomination!"   "Bernie is going to burn the house down!"

It appears now that the  mind virus of Sanders hysteria is almost as prevalent as Co-VID 19, the coronavirus. The litany of anti-Sanders complaints from the pundits, last night post-debate and in the papers, has my head spinning. Like, WTF happened to the WILL OF THE PEOPLE?  Does that not count any more in a supposedly democratic process?  If the votes and will of the majority of primary voters are with Sanders then what the hell are all these gloomy Gusses and Nervous Nellies yelping about?

Oh it's the socialism thing!  Americans are terrified of socialism and will never vote for a socialist candidate!  Says who?   And if there are Americans that "think" that way, 75 percent according to Claire McCaskill and one debate moderator (Chuck Todd) then it shows their political education is wanting and they need to be more fully informed. I would add that IF indeed so many 'Muricans are averse to the democratic socialism advocated by Bernie Sanders then they are victims of false consciousness.   And only such victims could be swayed during a hard campaign when Dotard begins to call Sanders a "communist".

How did so many become victims of this mindrot? I suspect much of the malady derives from the victims'  own economic and political ignorance.  For example, as a first test, ask ten Americans off the street what economic  class they belong to. Nine of ten, or more likely all ten, will say "middle class" - even if unemployed for a year, on food stamps, and about to have a home foreclosed.
A more concrete study of class in relation to income level was a (2003) survey conducted by The Economic Policy Institute. It asked generally where people thought they were in the economic spectrum: upper 1% (earning $320,000 year or more); upper 5% (> $80,000) or where?
A full 19% in this random survey claimed they were in the privileged class of the top 1%. A virtual statistical impossibility in any random study.  If those pathetic stats don't show clearly how too many Americans aspire to be "rich and powerful" - like the elites (as pointed out in the essay This Is How A Society Dies'  by Umair Haque (see top quote) I don't know what does.  Our very materialist aspirations corrupt and undermine our rational, realistic assessments of our own station.  And paves the way for the brutal, incomprehensible way we distrust and seek to denigrate others - especially immigrants - who threaten (we believe) a piece of our pie.  By extension it shows also how so many could have voted for a plutocratic con man swine like Trump.
In fact, internal survey cross-check questions on income category showed many of these working at a little above minimum wage, and even the highest were at barely $44,000/yr. Nowhere near the 1% threshold! Other commentators on this study (e.g. Froma Harrop, Ellen Goodman) pointed to this ignorance as a basis for supporting such crap as the Bush tax cuts, which overwhelmingly favored the rich elites. Thus:
A) They didn't know where they themselves fit, and indeed inflated their wealth and positions and
B) they actually believed they'd be millionaires one fine day and be able to partake of the tax cuts. (Or 'death tax' benefits).
In fact, they were deliriously out of touch with reality. As author Michael Parenti has noted ('The Dirty Truth') 94% of all wealth comes by way of inheritance, not paid work. So, they are fooling themselves. Unless they have a rich elder relative hidden away with a vast fortune, they'd be better off thinking they may have to work until they're 70 or 80 and even that may not be enough to stay in place.
But sadly, the Overclass and its minions (including the GOP Party, a basic "sub-division") consistently get working class folk to act against their own vested interests by distracting them with moralism ploys - raising "moral" issues like abortion, porn, gays and what not - just long enough so that many working class voters keep they're eyes off the ball when election day arrives. Then these workers wonder why they never get ahead.

Trump used the same ruse or con (in 2016)  in getting working class voters to believe he'd deliver millions of jobs for them, or let them keep old line,  retreating fare like coal mining.  They fell for this ploy hook, line and sinker and even appear in some states (e.g. Wisconsin)  prepared to fall for it again.  Guess they never heard of the old 'fool me once, shame on me, fool me twice, shame on you' etc. routine.

The  combination of economic ignorance and falling prey to moralism ploys  has paved the way for Overclass propagandizers to succeed in sowing false consciousness.  First we need to know what false consciousness is.
'False consciousness' is the term given to a false information system that's been absorbed in part or whole, either osmotically or via direct mental ingestion, by the majority of a population. It has specific uses in our Corporatocracy to mislead a population about how things actually work, and also on the basic economic and other data which are used to formulate policies. I touched on a number of the inherent economic lies and disinformation ploys in my earlier blog:
http://brane-space.blogspot.com/2011/09/economic-lies-distortions-and.html
But realize these distortions are just the tip of the iceberg.
For example, the effects of language and PR debasement of reality extend to the whole political system which can best be described as one of legally sanctioned, corporate-fuelled bribery. While citizens do get to vote every two or four years, in reality it's only to choose their next set of Overseers, errr....Overclass masters.

In the case of the current resistance to Sanders, it's clear a lot of it is led and promoted by cable news gasbags...errrr... anchors with nothing more edifying to do, e.g.
2020 Elections | Bernie Sanders | Media


The Resistance to Sanders Is Led by Cable News Anchors

"The real resistance by Democratic leaders, of course, is to its own base of anti-Establishment voters, candidates and office-holders, a resistance that's been too well documented to be repeated here. One of those candidates, Bernie Sanders, is right now making a credible threat to take over the Party in the name of that anti-Establishment base — an outcome that all donor-defending Democrats look upon with horror.

But what can they do, aside from the odd and opportune tilting of the balance? If they declare outright war — instead of the obvious but pretend-covert war they're now waging — they risk making a mockery of their own battle cries, Blue No Matter Who and Unity Unity Unity.

Enter the next line of defense, the Party-supporting mainstream press, including and especially cable news channels CNN and MSNBC. The real resistance for now against the Sanders-led revolt against the swamp in which they all swim has been handed off to Chuck Todd, Jake Tapper and all the colleagues and "analysts" who occupy million-dollar seats on TV's cable news stations."

Two other examples on display, this time from MSNBC,  of the anti-Sanders hysteria from the same piece:


"Chris Matthews waxed apoplectic about what electing a socialist could mean for America. “I have an attitude towards [Fidel] Castro,” he said. “I believe if Castro and the Reds had won the Cold War there would have been executions in Central Park, and I might have been one of the ones getting executed. And certain other people would be there cheering, OK?” Matthews’s colleagues pointed out that Sanders was more of a Danish type of socialist than a Castro type of socialist, but to little avail.

Two days later, James Carville, Bill Clinton’s former campaign guru, went on Morning Joe to rant about how a Sanders nomination would bring about the apocalypse. Literally. “The only thing between the United States and the abyss is the Democratic Party,” he said. “That’s it. If we go the way of the British Labour Party, if we nominate Jeremy Corbyn, it’s going to be the end of days.”


So when I hear comments like that offered by Real Clear Politics' pundit A.B. Stoddard last night, that "no one tried to stop Bernie", it tells me she has zero comprehension of the democratic process.  Also, that she is more an overclass tool than an objective observer. IF a majority of primary voters opt for Bernie then, why the fuss? That is the will of the plurality of voters at least for now,  so deal with it.

The hair on fire screeching by the cable gasbags is also egregious because it doesn't recognize that socialism isn't the problem - but rather the 'dog eat dog' form of capitalism that is holding away.  The one so many in our land now embrace, and described to a tee by Umair Haque in the top most quote.  The Democrats, supposedly the party of the little guy and greater social justice, had better grasp this and pull their heads out of their collective,  residual "overclass' asses before Super Tuesday.  By which I mean finally acknowledging Sen. Sanders has every right to be the front runner and without being vilified, i.e. being accused of "burning down the house", demolishing any chance to remove the human excrement from the WH -  or any other bullshit. Especially if he has a plurality of primary voters backing him.

Ezra Klein on Real Time a week ago put it best when he noted the best way to get the Trumpists and Repukes "on their back feet " in defensive mode.  That is, for the Dems to make their campaign about Medicare, Social Security and Trump's record in attempting to destroy them. This, coincidentally, is also Bernie Sanders forte given he is the best fighter for these already established and accepted forms of socialism.  Klein also agrees this motif- and Sanders' consistent associated refrains to do with it -  may be the best way to render Doturd a one term wonder.

Paul Krugman on This Bernie Sanders and Socialism Thing

Posted by Copernicus at 9:05 AM