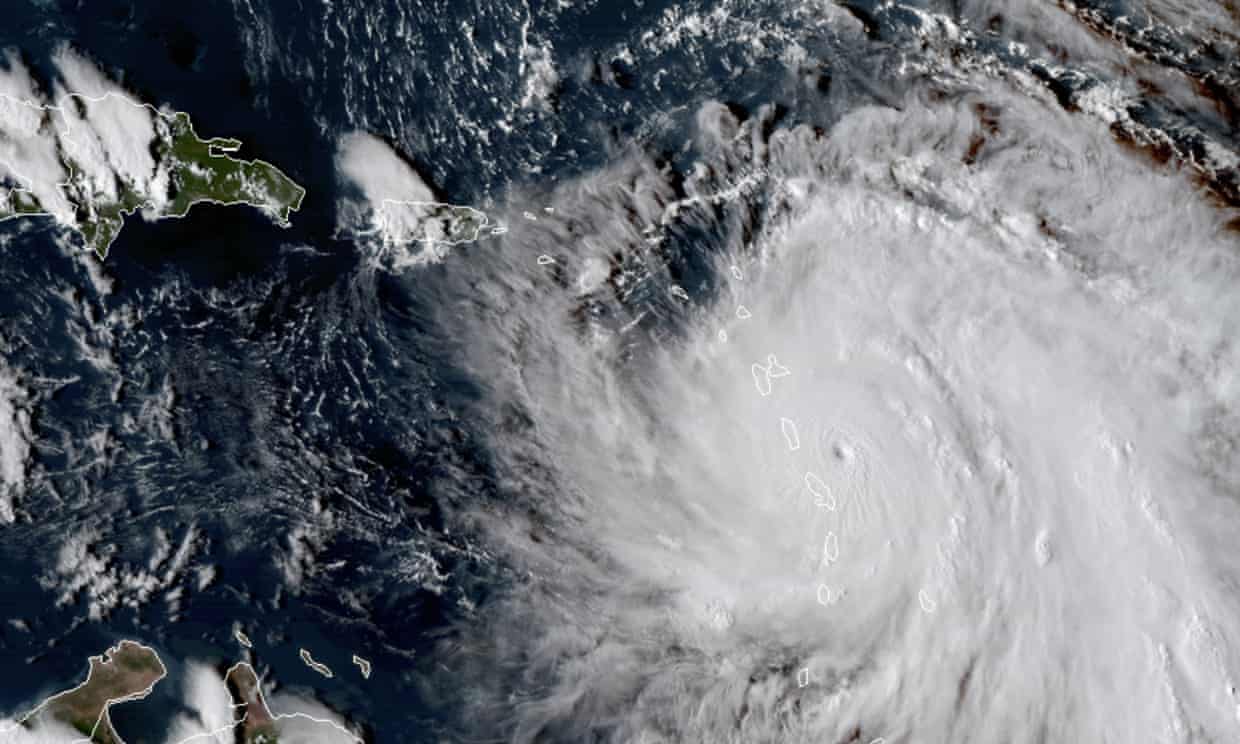 Let's see now: Harvey, Irma, Katia, Jose, and now Maria and Lee. Not names at a party but monster storms (or potential - "Lee") acting as "atmospheric daisy cutters" and  "nature's weapons of mass destruction" (according to a recent essay in TIME) set to mow down whole islands, towns and states.

One  would have thought that in the wake of the onslaughts of major hurricanes Harvey and Irma the climate denier simpletons would put a sock in it. But that just isn't happening, even after a new category 5 hurricane has demolished Dominica and is heading for the Leeward Island chain.   What is there about basic thermal physics that these climate deniers don't grasp? Well, for starters,  that these "atmospheric daisy cutters"  are actually vast heat transfer systems - removing giga-joules of excess heat from the tropics and conveying them to more northerly, cooler latitudes.

If in fact there was no connection to climate change- global warming these immense  heat conveyors wouldn't be necessary to redistribute heat as often as we've seen.. Where is this heat? Well, in the atmosphere but especially  in the now greatly warming oceans - near the equator. Thus, it is no coincidence that most major Atlantic hurricanes spin off the Cape Verde islands near the African coast. (Where yet another storm, Lee, is now brewing).

According to the oceanographic climate science site below :


Since 1955, over 90% of the excess heat trapped by greenhouse gases has been stored in the oceans.  Doing the math this is more than enough energy to power dozens of major hurricanes, e.g. Hugo, Allen, Harvey, Andrew, Irma and now Cat 5 Maria.

But the climate simpletons insist there is no connection, For example, meteorologist Ryan Maue writing in yesterday's WSJ ('Climate Change Hype Doesn't Help', p. A19).:

"In the aggregate, the global warming signal may just now be emerging out of our noisy observational records and we may not know certainly for several decades."

In fact, the warming signal is already well defined and observed, - in the collapsing Antarctic ice shelves - some larger than the state of Connecticut, in the melting of glaciers across the planet, and in the increased intensity of the recent spate of hurricanes - including Maria. According to SciCheck, a division of FactCheck.org:

"The most recent analysis of what’s known about the effect of climate change on hurricane activity comes from the June 28 draft of the U.S. Global Change Research Program’s Climate Science Special Report.  One of that report’s key findings said that human activities have “contributed to the observed increase in hurricane activity” in the North Atlantic Ocean since the 1970s. The Gulf of Mexico, where Harvey formed, is part of the North Atlantic Ocean.

The draft report echoes the findings of the U.N.’s Intergovernmental Panel on Climate Change’s 2013 assessment report, which found that scientists are “virtually certain” (99 percent to 100 percent confident) that there has been an “increase in the frequency and intensity of the strongest tropical cyclones since the 1970s” in the North Atlantic Ocean."


Indeed, extreme weather events  ("1,000 -year"  floods, storms) derived from climate change have killed more than twice as many people in the U.S. as terror attacks in the past 16 years - including the carnage on September 11, 2001.   In fact, the slow rolling disaster of ever intensifying climate change can be thought of as a mode of natural terror which we dismiss or diminish at our peril.

The Pentagon, in fact, has adopted a 'Net Zero' initiative to make its U.S. bases water and energy independent.  Supporting the national defense position, nearly all the reinsurance companies (like Munich Re),  have climate change factored into their tables, costs, plans.  The climate simpletons -who always think they know more than the experts- need to ask themselves why the reinsurance companies are now amongst the strongest advocates for proactive response to global warming. Well, if they'd read the recent WSJ article ('Reinsurers On Hook For Damages', Sept. 11, p. B9) they'd know why. Reinsurance is the 'backstop' for regular insurance  - providing capital when insurance companies are themselves tapped out. Companies like Munich Re are among the most energetic now to get whole communities to take climate change seriously and cease farting around and making excuses. They also want vulnerable communities to think twice before allowing construction on areas susceptible to storm surge or other threats -  many connected to climate change.

But the simpletons refuse to listen.  The real scam, then, isn't Limbaugh's claim that the media and advertisers, companies are "making money" off of hurricane hype - but that ignorant buffoons like Limbaugh are making tons of money by brainwashing their legions over the radio.  WHO do you think will be most severely impacted if another cat 5 hurricane strikes Florida?  Well, it won't be Rush Limbaugh but the sorry people who bought his hogswill and didn't evacuate because "it's all hype to get you to buy more water.' As wifey put it last night: "God, they're almost as bad as those televangelists - like Jim and Tammy Baker."  Well, maybe not quite, but close in terms of inducing gullibility.

What we DO know is the planet is currently  subject to a radiative heating effect equivalent to 2.5 x 10 7  TJ injected each year into the atmosphere or roughly 400,000 Hiroshima size A-bombs.   This in turn conforms to the observed  addition of 2 ppm  per year  in CO2 concentrations and an associated heating increase per year of  2 W/ m2.

Result?  The temperature of the planet is currently out of balance by  0.6  W/ m2.    and this is almsot entirely due to the concentration of atmospheric CO2 increasing as a result of incessant fossil fuel use.   Now the key part, the heat imbalance is especially extreme between the tropics and northerly latitudes. If then hurricanes represent heat transfer systems - to shift excess heat away from the equator - then it makes sense we'd see more of them so long as conditions (e.g. much warmer ocean temperatures) merit this transfer.  This is basic thermal physics, but of course most climate deniers - or buffoons like Rush Limbaugh - haven't even taken a basic high school physics course

To get down to cases,  a large portion of  Hurricane Harvey's energy was fueled by very warm Gulf temperatures which rose to between 2.7 F and 7.2 F above average. Because of these high Gulf surface temperatures the original Tropic Storm Harvey progressed to a Cat 4 hurricane in barely 48 hours.  How did the Gulf acquire such war temperatures? Well, from the absorption of excess heat in the atmosphere.  As I noted earlier,  over 90% of the excess heat trapped by greenhouse gases has been stored in the oceans.

Meteorologist Maue appears to try to make a much bigger case that the massive destruction wrought ty these storms like Maria derives from over building in areas susceptible to storm surges.  This is obviously part of the equation, but that alone doesn't account for the ferocity of the storms - such as Maria now lashing Guadeloupe after demolishing Dominica. Are those island states over built too? Not really. They are simply more vulnerable because their infrastructure is unable to withstand the force of a storm with the power of an E4 or E5 tornado lasting for hours.

When one dives beneath the superficial stuff, one sees that the over building in susceptible areas- whether on islands or mainland U.S. states - emerges from another problem: too high a density of people, as a result of over population. What? Well, consider that since I went through Hurricane Cleo in Miami in late August of '64 the global population has doubled - from about 3.5 b to 7.3 b. The population of the U.S. has also doubled from 160 million to over 320 million. Doesn't anyone think or surmise that all those extra people might need places to live: homes, condos, apartment buildings?
The point here is that the over building meme is more or less a red herring designed to distract from the link of monster hurricanes to climate change.

This leads us back to the question of why weatherman Maue would seek to distract or not fully buy into the global warming link, as currently manifest.   A possible explanation appears in the Jan.-Feb. 2011 Issue of The Columbia Journalism Review featuring a piece entitled ‘Hot Air: Why Don’t TV Weathermen Believe in Climate Change?’

In the article by Charles Homans, assorted reasons were put forward as to why many TV weathermen (especially ensconced in the Weather Channel) as well as a significant number of member of the American Meteorological Society (AMS) don’t buy climate change. Among them:

1- Given their familiarity with the defects in their own extended predictions, meteorologists looking at long range climate questions (such as global warming effects) are predisposed to “see a system doomed to terminal unpredictability”.

2- Most skeptic meteorologists (like Bob Breck an AMS-certified chief meteorologist at New Orleans WVUE) didn’t properly recognize the limits of their own scientific training – and hence the implausibility of their pronouncing on climate science.

3- Because of (2) the skeptic meteorologists tend to see their own “informed intuition” as the source of some kind of ersatz scientific authority – particularly if the skeptics are also excellent communicators, or fancy themselves so.

Some of the paradoxical statistics that were cited in the article, based on surveys carried out by Emory University Journalism lecturer Kris Wilson, included:

-Only 24% believed that humans were responsible for most of the change over the past half century.

- 50% were certain this wasn’t true and that humans weren’t responsible.

-Only 17% of the opinionated TV weathermen “received a graduate degree, a prerequisite for an academic researcher in any scientific field”.

Similar trends appear to correlate to Australian and European meteorologists but not quite to the same extent as for Americans. In any case, one would not expect to find much in the way of insight or illumination on global warming and its predictions from this lot.

Meteorology, after all, is distinct from climatology -  but I doubt few of the simpletons grasp that. As I have repeatedly suggested, they need to go to:


Where the meteorologists are on firmer ground pertains to the "cones of probability" they assign to storm tracks, again generally misunderstood by the likes of Limbaugh and his followers.  When they ask: "How come we can we put men on the Moon and send craft to Mars but can't even track a hurricane?" they mix apples and oranges.  Getting space craft to their destinations is a matter of using the deterministic laws of physics - from Newtonian gravitation and the special equations of celestial  mechanics. Those laws enable incredible precision once one uses them correctly (including inserting the right units). With hurricanes,  prediction isn't the same because they aren't deterministic systems like space craft.  They aren't subject to Newtonian laws of motion but rather subject to the much more complex stochastic parameters of fluid dynamics.

But again, we shouldn't be surprised so many fail to make the distinction, especially if they've never taken a high school physics course. But this is why - while they are entitled to their opinions - they're not entitled to their own facts.  To quote from Realclimate.org:

"Climate science is one of those fields where anyone, regardless of their lack of expertise or understanding, feels qualified to comment on new papers and ongoing controversies. This can be frustrating for scientists like ourselves who see agenda-driven ‘commentary’ on the Internet and in the opinion columns of newspapers crowding out careful analysis."

I suspect this sense of false expertise on climate is related to the eponymous Dunning-Kruger Effect .  This is a cognitive bias whereby people who are incompetent at something are unable to recognize their own incompetence. And not only do they fail to recognize their incompetence, they’re also likely to feel confident that they actually are competent.  The climate denier brigade, and especially those like Rush Limbaugh and Ann Coulter, must be numbered among this sorry lot.