Trump Disgraces Himself And The Country With Outrageous UN Exhibition 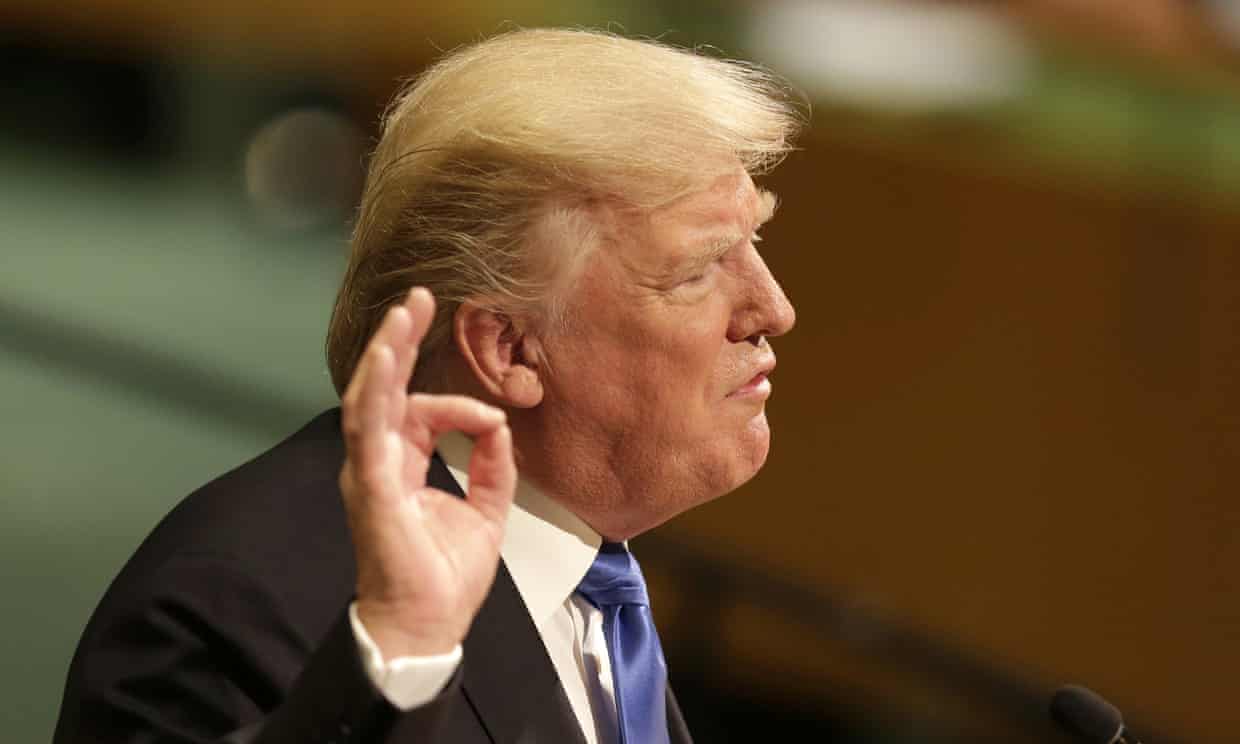 Trump At UN yesterday, delivering "the most atrocious speech ever given by an American President" in the words of Col. Lawrence Wilkerson (Ret.)

Trump's outrageous exhibition at the UN yesterday was just that, an exhibition,  by a two-bit Queens real estate huckster, totally out of his depth, and shaking with fear.  Fear at an implacable North Korean enemy that isn't intimidated in the least by this orange-hued baboon's histrionics or hysteria. They know they have him over a (missile) barrel and they're not budging from their objectives to secure their country against a "regime change"..

The  North Korean UN rep had the sense to vacate his seat before the orange Orang arrived, despoiling the speech podium with his loathsome presence. Good thing as the mutt singled out North Korea, recounting its history of kidnapping, oppression, and missile and nuclear tests, blabbing:

“The US has great strength and patience. If it is forced to defend ourselves or our allies, we will have no choice but to totally destroy North Korea.”

Alarmed murmurs spread among the sane diplomats in the hall as the deranged Trump delivered another barb. Using his newly adopted epithet for Kim Jong-un, Trump said: “Rocket Man is on a suicide mission for himself and for his regime.”

He said the US was “ready, willing and able” to take military action, but said hopefully that would be unnecessary if the rest of the world stepped up its efforts to constrain the Pyongyang regime.

“That is what the United Nations is for.  Let’s see how they do.”

How they do? Abetting a madman to launch a nuclear war? They should have tossed his ass out. As it was the performance was greeted in the UN chamber mostly with silence and occasional outbreaks of disapproving murmurs, as Trump castigated a succession of  regimes he painted as "hostile" - leaving out the most pathological of all: the Trump Nazis..  How else respond when confronted by the equivalent of a two year old in the midst of a tantrum, ready to stomp his feet and cry if he doesn't get his way.


In fact, Trump's childish display with the brash, bombastic rhetoric to boot, evoked Nikita Khrushchev's shoe banging and bluster in his own October 12, 1960 UN performance, e.g.

In his own spiel, Trump played the brinksmanship card again, mindlessly boasting he would "totally destroy North Korea" - failing to acknowledge if he did so he'd also totally destroy 25 million souls in Seoul, South Korea. See e.g.

Since killing 25 million people - the population of North Korea- would be a war crime, we can say Trump advocated for a war crime and did it in the process of name calling ("rocket man").  President John F. Kennedy in October, 1962 also faced down a nuclear rocket threat - but it was far more proximate with more than seven dozen IRBMs based in Cuba, 90 miles from Miami.  Kennedy didn't call Castro or Khrushchev names like Trump did to Kim Jong- Un, he acted the way an intelligent, controlled leader is expected to - at least by sane citizens.

In the end, Kennedy and Khrushchev came to a solution which arguably spared the world from a nuclear catastrophe  - though not on the scale of one that would occur today.  But sadly, we have no sober leader at the helm but a regressed two year old in a 71 year old's body.

It is no surprise that we've since learned the speech was drafted by Bannon groupie and alt Right asshole Steven Miller. That would be the guy that bears an uncanny resemblance to the Nazi propaganda minister Joseph Goebbels . So much so that there are even youtube videos featuring the two spieling in alternate segments, e.g.

So, if things really do come to a possible nuclear war we may have to lay blame on a latter day former Nazi look alike.

Seriously, though, where were the tempering reins of Gen. Jim Mattis, or Gen. John Kelly? Were they simply not able to control the mad dogs that still run amuck in the White House?  Or, did Gen. Mattis really believe the BS he uttered two days ago that the U.S. could take out North Korean underground missile silos with no impacts on South Korea? If he really believes that then he also has mutated into a looney tune. Maybe one can blame the proximity to the looney tune in chief but that's little consolation to the millions of South Koreans who'd bear the brunt of 10,000 N. Korean artillery pieces - half loaded up with sarin, the other half with smallpox virus, Ebola and gas gangrene.

Morons like Israel's Bibi Netanyahu called Trump's spiel "courageous" but what would you expect from a warmonger who can't wait to bring on Armageddon?  The fact is there was no speech in a real sense, it was an atrocious exhibition of bombast and baloney by a guy that doesn't merit presiding over a dog pound far less being president. Indeed, the only logical place for this rabid mutt is confined to a dog pound, to await his fate.

http://www.smirkingchimp.com/thread/jefferson-morley/75247/trumps-maniacal-u-n-address-has-set-america-on-a-course-with-cataclysm
Posted by Copernicus at 7:55 AM