The "Summer Of Love": Really All It Was Cracked Up To Be?

While I didn't make it to San Francisco in '67 I did arrive at Haight Street - by car - in 2012, when I was there for prostate cancer radiation treatment at UCSF.

As the summer of 2017 draws to a close, many of us (Boomers) recall the 'Summer of Love' fifty years ago, made popular by the anthem 'San Francisco' by Scott McKenzie, e.g.

Since then I've been asked by many - generally nieces and nephews - if it was all it was cracked up to be, or just a lot of hype. Well, it was a bit of both.

At the time I was working for Pan American Oil Company in New Orleans, just off Lee Circle - and when the statue of Robert E. Lee was still there atop a seventy foot high pedestal, e.g. 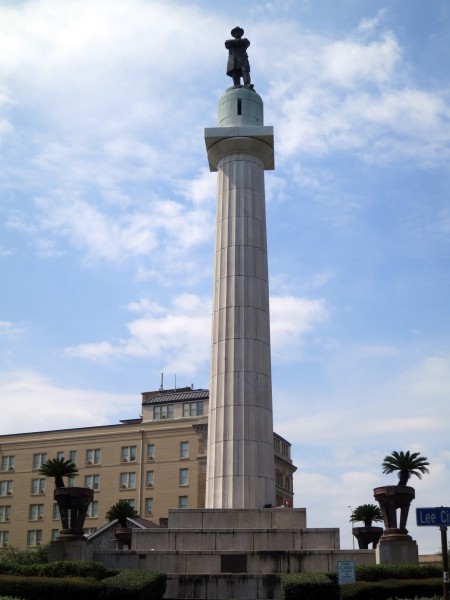 Here, the Pan American Oil Bldg. can be seen just behind the Robert E. Lee Statue. That summer I celebrated my 21st birthday with a small party of co-workers at the apartment I had on Canal Street.  (Lee Circle was about a half mile from the apt. on the trolley line, then walking)  Unlike the hippies and kids who took off for Frisco, I had to stay with "the 9 to 5"  (actually, 7:45 to 5) to earn the money to be able to return to school to get my degree - which turned out to be in astronomy, as opposed to the chemistry I was majoring in at Loyola U.

What about the 'Summer of Love' itself as experienced in San Francisco? Contrary to most of the romanticized portrayals it was actually "crazy, crowded and not a little cruddy" in the words of one Boomer (Mike Lafavore) quoted in an AARP magazine piece (Oct., p. 38).   That sentiment was echoed by two hippie friends - students Mahlon and Marcie - at the University of South Florida when I returned to do my astronomy degree in 1969.  They also took pains to remind me "it wasn't just the summer of love, but summers of love, in 1967, 68 and 69" - they said this after just returning from Woodstock.

In San Fran itself, they pointedly noted that so many kids had arrived, lured by rock music and drugs - like LSD- it was almost impossible to find a decent place to bed down. Many had to sleep on the streets or in makeshift boxes and tents. The luckier ones managed to nab $2 a night digs in the Tenderloin district.

While often crowded, grimy and grubby the kids who did get there still enjoyed themselves because the zeitgeist was one of community and familiarity. It was as if each automatically spoke the lingo of the others- often they could finish each others' sentences - according to M & M.  According to one person quoted in the AARP piece:

"What was cool was that you could join a group of strangers anytime, anywhere and you knew you'd be accepted. You only had to walk out your door and join the fun."

This was radically different from working at the oil company - or anyplace-  in New Orleans, where tolerance for difference was a rare commodity. (A favorite epithet for anyone with long hair was "fruit"). So culturally, you couldn't get much farther from San Francisco than New Orleans.

How many hippies really existed in 1967? TIME magazine estimated the total number at 300,000 or about 0.15 percent of the then U.S.  population.  At the time, as Mahlon once put it: "You have to distinguish between the real Hippies and the fakes- who merely dressed the part - but didn't buy into the philosophy of "peace and love".

The important thing to bear in mind was that the zeitgeist was not universal, so when Jann Wenner - cofounder of Rolling Stone -  said in the AARP piece:

"Ideas about the world were being shared, and ideas about the American experience were being informally passed around" such as respect for other cultures and religions not one's own and respect for the earth - that applied to localized areas.  In the gritty New Orleans of 1967, where blacks still had to ride at the rear of trolleys - those who expressed such shared ideas tended to have a short half life.  And if you had a grain of sense you didn't do drugs in N.O. ,  you did Bourbon - preferably Southern Comfort.  (Even a first offense with a few grams of MJ brought a sentence of 15 years served out at Angola)

San Francisco it was not.

So when those living outside the "peace and love" bubble beheld kids flocking to gurus, practicing yoga and recalibrating their American Bourgeois experience to embrace other cultures and cuisines, they thought they'd all gone on extended drug trips.

These days, it's common for the most cynical among us - often wannabe comics like P.J. O'Rourke- to lampoon the Summer of love, hippies and Boomers in general.  But they can't deny that our world has improved in a number of ways that can be traced back to the vibes of that '67 summer.  The air is cleaner (though how long with Trump in power we can't say), the nation's rivers no longer catch fire and one can actually find healthy organic foods in abundance.   In terms of intangibles, let's note that even in the reddest parts of Trump country Americans have become used to more personal freedom than their parents ever had.   In addition, seven states have now come on board to legalize the casual use of MJ  - something that even the hippies of 1967 wouldn't have believed.

The Summer of love may not have been all that it's cracked up to be,  now seen in 20-20 hindsight, exposing the flaws surrounding an over- romanticized era. But there has been a positive legacy  for which the 70 percent of the population not alive then can still partake.