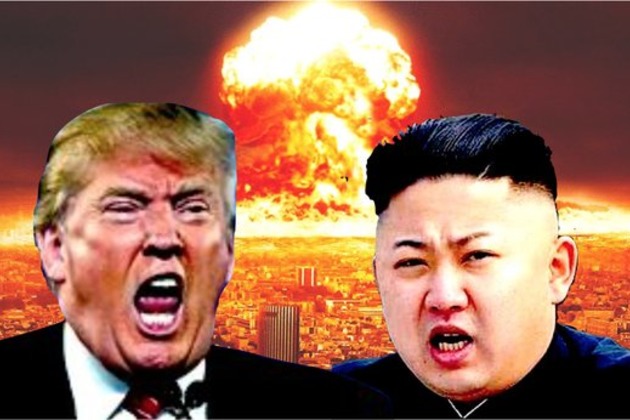 As the "war of words" continues, this time backed up by nuclear force, Kim Jong-un returned fire on the Orange Orang letting fly with the epithet that he was a "mentally deranged dotard".  Of course, 90 percent of Twitter users had to race to their dictionaries to look up the word, but if they went to the Oxford Dictionary they'd have seen the meaning as a "mentally deficient elderly person" - in other words, an elderly person likely with some degree of dementia.

While the media goes nuts over the charge, anyone following Trump's antics the past seven months knows damned well it hits the nail on the head. In fact, I'd already written a post some time ago pointing to the evidence Trump likely has Alzheimer's disease.  See e.g.


For example, I pointed to the "Alzheimer's stare" characteristic of  the disease in many elderly, e.g This was pointed out to me by my psychologist niece Shayl, now finishing her Ph.D. No one, obviously, faults an innocent person suffering from the disease - but Trump is in no way innocent. IF indeed he was innocent, he would have long since resigned from office as a danger to himself and others, especially given his access to the nuclear codes. An innocent man would grasp the risk his defective judgment poses and vacate a powerful position, as opposed to keeping it out of ego or a deranged commitment to a clueless base.

This is especially relevant as those in the later stages of Alzheimer's - as Shayl also points out - are given to explosive eruptions of rage. We've seen Trump in this mode many times, and again it wouldn't be so serious or detrimental if he didn't have his grubby orange mitts near the nuclear football.

Further evidence? His father Fred was diagnosed with Alzheimer’s disease six years before his death. According to the Alzheimer’s Association, “age, family history and heredity” are the most important risk factors in developing the disease. Trump, at 70 years old, is the oldest president to take office. Moreover,  a recent analysis found he showed symptoms of age-related cognitive impairment.

Reinforcing this, Trump displays no command of internal formation of relevant words, language. Look at his recent appearance referring to a non-existent African nation of Nambia.   This isn't simply a one off "mispronunciation" either,  given Trump is known for incomprehensible "word salads".

Alex Leo of the Daily Beast transcribed one sentence Trump delivered at a campaign stop in South Carolina last year, manifesting as a series of dead ends, unfinished thoughts and odd ramblings:


"Look, having nuclear—my uncle was a great professor and scientist and engineer, Dr. John Trump at MIT; good genes, very good genes, OK, very smart, the Wharton School of Finance, very good, very smart—you know, if you're a conservative Republican, if I were a liberal, if, like, OK, if I ran as a liberal Democrat, they would say I'm one of the smartest people anywhere in the world—it's true!—but when you're a conservative Republican they try—oh, do they do a number—that's why I always start off: Went to Wharton, was a good student, went there, went there, did this, built a fortune—you know I have to give my, like, credentials all the time, because we're a little disadvantaged—but you look at the nuclear deal, the thing that really bothers me—it would have been so easy, and it's not as important as these lives are (nuclear is powerful; my uncle explained that to me many, many years ago, the power and that was 35 years ago; he would explain the power of what's going to happen and he was right—who would have thought?), but when you look at what's going on with the four prisoners—now it used to be three, now it's four—but when it was three and even now, I would have said it's all in the messenger, fellas, and it is fellas because, you know, they don't, they haven't figured that the women are smarter right now than the men, so you know, it's gonna take them about another 150 years—but the Persians are great negotiators, the Iranians are great negotiators, so, and they, they just killed, they just killed us."


Hell, don't just take my word for these claims and conjectures,  given I'm as anti-Trump as it gets and want to see his ass removed from office asap as an act of national emergency..  Study  the clip below,

https://www.youtube.com/watch?v=NXUhcVWOyuI in which David Pakman shows how typical Trump bluster could actually be a sign of progressive dementia. Think this is an exaggeration or hype?  Try to recall  when Trump forgot which country he’d just bombed. (He said "Iraq", it was Syria.)  Also how it just slipped his mind to sign a pair of executive orders during an event created for that explicit purpose. And hey, how about when he couldn’t locate Rudy Giuliani, who was sitting directly across from him at a media briefing some months ago?

Say what you will of Kim, and I am no fan -  as he's nothing more than a juvenile delinquent with his own hands on nuclear buttons-  but his assessment of Trump was spot on.  .To staunch further hysteria fomented by the media, i.e. that he plans to "drop an H-bomb in the Pacific"  - let's halt right there and agree there's no evidence he has even one hydrogen bomb. And I refer to the test done a few weeks ago which raised all kinds of hackles and alarms.

In my Sept. 5th post, for example, I cited the research of Paul Richards, a researcher at Columbia University's Lamont-Doherty Earth Observatory, who studies the seismic signals of nuclear weapons test explosions:

"It does not seem large enough to be the mark of a true hydrogen bomb detonation."

"The limited number of (hydrogen bomb tests) that have been done underground in the few megaton range have magnitudes on in the high six or seven range. That would be a hundred times larger than this."

This is reinforced by Won-Young Kim, also a research scientist at Columbia University's Lamont-Doherty Earth Observatory who collaborates with Richards.   He observes that for a test of a supposedly more powerful device, the seismic signal bears a similarity to those of previous nuclear tests involving smaller devices.

Kim added in a CNBC interview:

"The consensus is that a hydrogen bomb or thermonuclear device would be huge — the yield would be much bigger than that of a small nuclear bomb."


How is this? Let's go back to yield and mass delivery specs for earlier H-bombs, for which I showed two designs, e.g.

The U.S. original H-bomb (Teller-Ulam ) design shown in the top graphic, consists of a fission bomb - massive in itself  -  at one end of a heavy radiation case. At the other end is the thermonuclear charge, basically a cylinder with a neutron shield at one end (liquid deuterium inside it) and a thin 'spark plug' of plutonium mixed with tritium. At detonation, the radiation from the fission bomb reflects off the radiation casing and compresses the thermonuclear charge to many times its original density.

The compression then sparks a fission reaction in the mixed Pu- 3 H spark plug that compresses the fusion fuel simultaneously from the other side. The fusion material is now primed for fusion reactions which yield megaton scale release.

Given a similar design for the N. Korean weapon, the best explanation of what transpired is that the full implosion of  the thermonuclear charge failed to occur.  This means the high density needed for actual nuclear fusion - needed to overcome Coulomb repulsion, i.e. between like charged protons- did not occur. The result of 100 kt was merely an advanced atomic explosion, or "boosted" detonation,  but not a hydrogen fusion detonation.

By comparison, the U.S.  early 50s' 'Mike' design, once refined, came in at 1,360 kg  for total mass and the yield to mass ratio translating into just over a 1 megaton explosion (1.08 Mt).  This conforms to what Bruce Bennett, a senior analyst for Rand Corporation, a non-partisan think tank - said: "That type of explosion doesn't cause kilotons [of explosive yield], it causes megatons."

Again, the incipient danger now is the ever spiraling rhetoric on both sides, as former N. Korean CIA analyst Sue Mi Terry has warned.  This makes an accidental strike ever more likely owing to misunderstanding. Both sides need to cool it, especially the U.S. which we expect to be the adult in the room,  not a spoiled brat confronting another one.

It may be time for Chief of staff Gen. John Kelly, to read the Donald "the riot act" and make sure he grasps that no more blustering brinksmanship will be tolerated.  If he doesn't conform, then Kelly needs to leave and - on his own - work to get Trump either committed to the nearest asylum or removed under the 25th Amendment to the Constitution,

The funniest tweet today? Trump calling Kim a "madman" - failing to recognize the chief Madman front and center in the oval office.
.
Posted by Copernicus at 8:40 AM