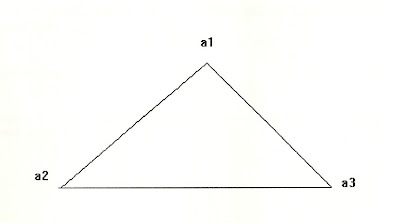 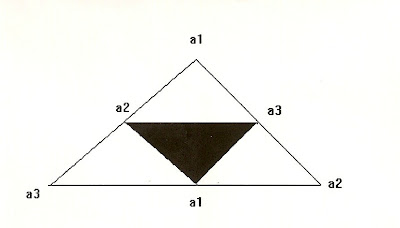 We return to fractals again, this time to examine them in more detail at a basic level. Here I want to compare two simple fractal spaces based on an object known as "the Sierpinski gasket". The most elemental form is depicted in Fig. 1 above and can be compared with Fig 2 which is generated from it.

For Fig. 1, we regard the simple (1/a) space as the generator of more complex fractal spaces F that are essentially infinite. To undertake the cyclic generation process we require that the specification of the vertices (a1, a2, a3) be non-degenerate, i.e. no more than one eigenvalue: a1, a2, or a3 can be assigned for any triangular space. The fundamental space depicted in Fig. 1 we shall call a "Planckian gasket" and note that its fractal mass density can be found as well as its fractal dimension.

The fractal mass density can be computed from:

However, we further note that to get from the primitive space to the space {2/a} we require the transposition (see the blog entry on transpositions from two years ago):

That is, a1 remains fixed, and a2 - a3 are "mirrored" through a bisector axis identified above from, e.g.  a1-a1. Note that the "hole" (in black) represents the inversion space (or negative space: -a1a2a3) a result of the inversion of the positive space of the primitive {1/a}.

The fractal mass density can be computed from:

And the fractal dimension is:

Exercise for the math-minded reader: Draw the space for {3/a} with three symmetric holes of oriented vertices a1, a2, and a3 inside it. Then work out the fractal mass density and fractal dimension.
Posted by Copernicus at 5:05 AM