In earlier posts, I examined some of  the research into the appearance of aurorae on Jupiter. For example, on Nov. 21, 2015 I cited some of the earliest research done, by two astronomers  (Ray S. Clary and James H. Hunter Jr.)  from the University of South Florida, e.g.

Their paper, Hydrogen Alpha Auroral Activity on Jupiter', appeared in The Astrophysical Journal (Vol. 199, p. 517) and dealt with the attempted detection of auroral activity on the largest planet.  They carried out their observations from April through November, 1972 "usually with Jupiter 2 hours or less  from the meridian". This would have ensured the optimal seeing conditions since Jupiter's altitude would be displaced enough from the horizon to avoid atmospheric effects, and enable the greatest clarity.

The pair ended up making a total of 100 hours of observation yielding some 2,000 photographs of Jupiter, most of them prior to the planet's opposition on June 24 of that year. Still "observations were often interrupted by clouds or haze"  Alas, the results themselves were ambiguous. Examining their prime plates published in their paper (4 pages in all) I could detect nothing remarkable or any features that stood out - even in the polar areas.

Contrast this limited observational condition with one of the highly enhanced images of Jupiter's aurorae (at N. and S. poles)  visible in the Hubble Space Telescope photograph below e.g.

A major difference is that unlike Earth's auroras, those on Jupiter are nearly continuous - driven by the planet's rapid rotation and its volcanic moon (Io),  which spews out sulfur and oxygen ions as well as electrons into space, The latter speed along the planet's magnetic field lines and - if powerful enough - slam into the atmosphere causing its particles to glow.

Tao et al (Journal of Geophysical Research -Space Physics, Oct. 2015, p. 1002), using the Japanese Hisaki Space Telescope, measured variations in the brightness of the Jovian aurorae. They reported observing two kinds of auroral pulses. In one, the aurora brightened for up to several days at a time, and the authors attributed this to the solar wind. Thus, as it 'washes over' the planet, the charged particles are buffeted and compress Jupiter's magnetic field. This is very similar to what happens on Earth.

The team also observed much more rapid variations, with pulses typically lasting less than ten hours. By comparing the Hisaki images with images taken simultaneously by the Hubble Space Telescope, Tao et al could see these variations arose from the aurora brightening at lower altitudes, at the bottom of the auroral arc and as reported by Kimura at al (op. cit.)

Last August, NASA’s Juno spacecraft deepened that mystery: In a close flyby of Jupiter’s poles, it found powerful angular beams of electrons above the aurora, extending in energy to greater than 1 million electron volts. These beams shoot upward over the polar caps and over the main aurora, even where a weaker downward component contains sufficient energy flux to generate the powerful emissions from the main aurora.

Now, as a contribution to a special Geophysical Research Letters section on Juno’s first encounter with Jupiter, Mauk et al. provide the most detailed analysis of this phenomenon yet. Although they don’t know the causes, they suggest it may be the key to understanding Jupiter’s intense auroras.

Juno’s close encounter came on 27 August 2016, just a couple months after it arrived at Jupiter to study the planet, its moons, and its enormous magnetic field. The spacecraft’s pass over the northern and southern poles took it above dancing ovals of aurora, allowing it to peek into the polar regions within.  Mauk et al analyzed data from the Jupiter Energetic Particle Detector Instrument, which measured the trajectories and energies of the charged particles whizzing past. As the craft approached the auroral oval from the more equatorward regions, it saw typical signatures of trapped electrons with up-down differences reminiscent of those generating faint diffuse auroras at Earth.

When the spacecraft passed directly over the bright main auroral oval, it detected two highly directional angular beams—for both downward and upward traveling electrons. When Juno fully crossed inside the oval, deep within the polar caps, the downward beams virtually disappeared, leaving only the upward beams, varying in intensity but always present. This is very unlike what happens at Earth, where spacecraft passing over the most intense auroras find electrons accelerated downward only into what are called energy beams.

The Jovian bidirectional angle beams indicate that Jupiter’s aurora are generated by a totally different process than on Earth—a much more random one where collisions and turbulence propel particles both down and up along magnetic field lines. The team hypothesizes that this may have been happening most strongly in the region below Juno’s position, which could explain why Juno saw the large up-down differences in the beams over the main auroral oval.

It's tempting to conjecture that the monodirectional electron angular beams emerging from the “polar cap,” can be modeled using something analogous to:

The diagram shows the orbital plane of the (25–800 keV) electron's motion, as well as the orientations of the local magnetic induction (B) - out of the plane (toward the reader), and the radiated E-field which is polarized parallel to the orbital plane.  The authors' abstract (Geophysical Research Letters, https://doi.org/10.1002/2016GL072286, 2017)  notes the energy spectra of all beams being monotonic and hard (i.e. not structured in energy), showing power law-like distributions often extending beyond ~800 keV.   They also make reference to "variable downward energy fluxes (below 1 RJ altitudes within the loss cone". 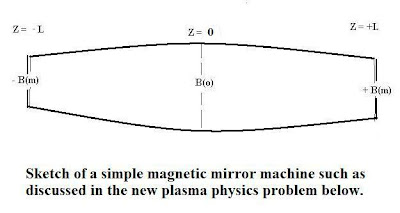 Note that the loss cones is an important device in space physics. One uses the sine of the loss cone angle to obtain the mirror ratio relating the magnetic inductions at the presumptive loop ends:

If one finds that there are particles within the “mirrors” for which the “pitch angle” (a) has:

then these will be reflected within the tube, On the other hand, those particles for which the “less than” condition applies will be lost, i.e. on transmission out of the mirror configuration.

For the Juno observations, the equation used (see paper at link below) was:


where αsource = 90°, BJuno and αJuno are the magnetic field strength and the beam angle at Juno, respectively, we find that Bsource ≈ 8.1 G in the north and Bsource ≈ 7.2 G in the south