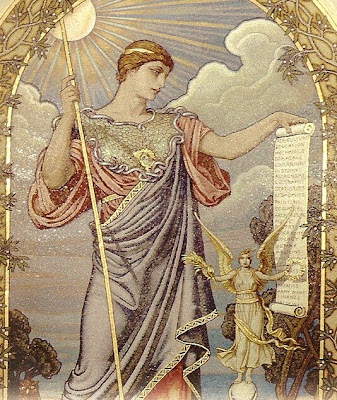 Aristotle's Nichomachean Ethics showed how prudence can be used to develop a moral conscience not based on absolutist mandates.

Perhaps the first person of antiquity to recognize that absolute moral imperatives or standards were impractical was Aristotle. He accomplished this by his emphasis on the "golden mean", e.g.  between two extremes of behavior.  as the basis for a generic moral compass. Much of this brilliant and temperate morality was set out in his masterpiece, The Nichomachean Ethics.

In forging his Nichomachean Ethics, Aristotle was careful to invoke the practical wisdom of prudence in pursuing the maximum good (for the greatest number) and avoiding evil, or at least minimizing it if it is impossible to avoid.

Aristotle defined prudence as pre-eminent, that is, it is the practical wisdom of knowing how to act, and thence how to secure the ends and goals one seeks for one's life. The golden mean structure is implicit in the deliberative exercise of prudence but is also evident in the judgment phase of prudence - when one is called to make a right action (or not).

Aristotle's ethics bear a striking similarity to a more modern revival known as moral provisionalism.   In provisional morality the greater relative good is always chosen over the lesser one. For example, the case of the nun some seven years ago who chose to save the life of a 27 year old  woman giving birth  Her moral choice was either to let the birth occur and see both mother and infant die, or prevent the birth (because of the mother’s blood pressure complications) and save the mother.In this case, two deaths with two life saving efforts represents the lesser good, while one death with one life saving effort represents the greater one.

Anyway, Aristotle's ethics and moral provisionalism occurred to me as I was reading a letter in the WSJ yesterday about the need to impose "absolute moral guideposts to determine the line between sick and healthy behavior", especially as Americans "no longer accept the Judaeo-Christian code as God-given and absolute". The letter writer, Tim Watson, also asked:

"If there no longer are absolutes why should others dictate my morality or judge my online viewing preferences?"

"The premoral mind confuses the disgusting with the wrong and retains an infantile fear of things sexual. Its rationality is overcome by emotion, fantasy, wish and projection.."

Dacher Keltner in his own book, 'Born to be Good', makes a similar point, referencing (p. 130)  when he once asked students for their reaction to a hypothetical in which a man goes to the supermarket to purchase a raw chicken, then takes it back home and has sex with it. After the majority of students respond with utter disgust they come to their rational senses and realize he hasn't really transgressed against anyone - "so long as he doesn't serve the chicken to guests for dinner".  In other words, one must first clear out the clutter of subjective emotional moralism before one can explore morality.

Thus, Watson appears to believe that because his feelings of disgust might be aroused by what he or  someone else sees or does, that makes the act immoral or even "evil".  He confirms this by also noting that at one time- "before the secularization of recent decades, most Americans knew when their behavior was immoral or depraved."

He may have a point in terms that the ethical compass of too many has become blunted or non-existent. How else explain the fate of a pledge at a UPenn frat, forced to undergo an alcohol quaffing "gauntlet" then falling down stairs, hitting his head,  and being left to lie there for twelve hours before his "frat brothers" called 911?  The young pledge died, and now those brothers are facing charges. The question is why wasn't a basic moral impulse aroused in any of them to immediately act on the kid's behalf when he was unresponsive? This is a far more germane question on moral or ethical norms than asking why a person would view pregnant women having sex.

Blaming "secularization" for any moral or ethical blunting is also off the mark. We live in a secular society, after all, not a religious one governed by the Ten Commandments or Old Testament mandates and mores.  What sort of society would we get by rigidly adhering to the latter? Some examples:

"If a man has a stubborn and rebellious son, who will not obey the voice of his father or the voice of his mother, and - though they chastise him he will not give heed to them, then his father and mother shall take hold of him and bring him out to the elders of his city at the gate of the place where he lives, and they shall say to the elders of the city, 'This our son is stubborn and rebellious, he will not obey our voice; he is a glutton and a drunkard. Then all the men of the city shall stone him to death with stones.."

So if "old time religion" governed our society instead of a secular Constitution we'd expect adulterers as well as impudent sons stoned to death in the streets. Of course, homosexuals would also face such a fate based on several citations in Leviticus. For example, Leviticus 20:13: 'If a man has sexual relations with a man as one does with a woman, both of them have done what is detestable. They are to be put to death; their blood will be on their own heads'.

Tim Watson's error inheres in demanding an absolute moral code everyone must adhere to, as opposed to moral individualism, or the development of a refined moral and ethical conscience. The tragedy of the UPenn incident is that none of the frat boys- who allowed their pledge to lie unattended for 12 hours-   had the conscience of a slug. If any of them had, they'd have called 911 immediately, or if obstructed by the "brothers" then gone to an outside phone to make the damned call.

Mendelson herself is clear on the role of conscience and why a highly developed conscience is essential to choice of ethical behavior. She also contrasts this with the moral immaturity that defines the premoral character,  writing (p. 71):

"In the premoral mind, in place of moral individualism - the individual's capacity to think and act according to conscience - there is mere egoism: the demand or wish, to be allowed to do and have what one wants. The premoral individual who confronts a moral culture must cope with social demands that he regards as illegitimate.

Because of his sense of entitlement, his greed and his demand for superiority feel right to him and are not internally moderated as they are in moral minds. Moral restraints may provoke him to outright rage and hatred."

Thus, we beheld Trump's ravenous rage when held to account (by the still existent moral culture) for his groping and forced kissing of women without their will during the 2016 campaign. And now, in the wake of the immoral, thuggish firing of James Comey, compounding his egoism in order to trump conscience. This leads the wary, morally developed citizen to inquire: Do we have a government of laws or of men? If of men, filled with ego and false pride like Trump, we cannot be surprised at the progressive dissolution of our nation and erosion of its collective conscience as he and his toadies destroy the ethical and moral basis for our secular laws as enshrined in our Constitution.

One can sympathize with letter writer Watson's yen for absolute moral guideposts, but in the end it's a fool's errand. For one thing absolutes are inaccessible to limited brains. So one must concede that humans – with limited knowledge- lack the wherewithal to issue absolute, fixed moral laws. Note this is not an absolute statement in itself, merely a statement of limitation, biological and theoretical, based on facts. If brains are limited in size and capacity they simply can't know everything, hence, can't render absolutist propositions about any positive actions. (This also follows from the Godel Incompletness Theorems).

Our best option then is to re-examine Aristotle's own ethics in terms of prudence, and see how they can assist us in the goal of attaining a developed conscience based on moral individualism.