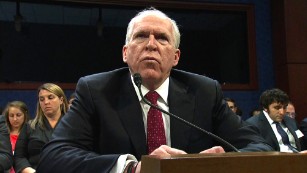 "Frequently, individuals on a treasonous path do not even realize they're on that path until it gets to be too late,"   - Former CIA Director John Brennan yesterday before the House Intelligence Committee

Yesterday,  speaking before the House Intelligence Committee, John Brennan offered a frank assessment of Russia's aggressive approach to meddling in the 2016 election and, in the process, complicated Donald Trump's attempts to cast the whole thing as "fake news".  Brennan's statement below put the kibosh on this nonsense:

"I encountered and am aware of information and intelligence that revealed contacts and interactions between Russian officials and US persons involved in the Trump campaign that I was concerned about because of known Russian efforts to suborn such individuals. It raised questions in my mind about whether Russia was able to gain the cooperation of those individuals."

While Brennan would not specifically identify any individuals associated with the Trump campaign who had contacts with Russian officials and would not speculate as to whether there was any collusion or collaboration, he did tell lawmakers why he was concerned about the contacts occurring against the general background of Russian efforts to meddle in the election. Brennan said he'd studied Russian intelligence activities over the years, and how Russian intelligence services have been able to get people to betray their country. "Frequently, individuals on a treasonous path do not even realize they're on that path until it gets to be too late," he said.

Brennan also told the committee he believed that Russia anticipated that Clinton would be the likely winner of the presidential race, and that Russia tried to "damage and bloody" her before Election Day.  Most of this I'd written about in blog posts over the campaign including that Clinton would be the more "warlike" against the Russians. I cited for reference  her saber -rattling AIPAC speech, e.g.

HRC delivering her warnings at CA military base last year

"The best way to help Israel deal with Iran’s growing nuclear capability is to help the people of Syria overthrow the regime of Bashar Assad."

I added in my post at the time: "Seriously? And you think the Russians will just sit by, smile and allow you to do that? (As you think they'd allow you to implement 'no fly' zones)  You have to be kidding. Again, this is what Bernie referred to in the debates as lack of judgment. "

Of course, this would have sent red alarms to the Russians too. I'd also delivered a number of posts on Clinton regarding her staunch neoconservative position  - more likely to incite a war with the Russians. All of this, btw, would have been known by anyone following Hillary Clinton's speeches and interviews.  All of it is also factual, based on HRC's actual speeches, events - not fake news!  (In the interests of full disclosure I subsequently came to see Hillary as the more responsible candidate, especially after Trump's "pussy grabbing" video with Billy Bush emerged, and the debates - which found Hillary as far more prepared and Trump trying to "wing it".)

The point I'm making is there was more than ample basis for the Russians to 'go for it' in ensuring the 2016 election outcome went to Trump. On one level there is the issue of "collusion" or conspiracy of actual Trump campaign people with Russian intel or other officials. As Brennan voiced his own concerns yesterday:

"I was worried about the number of the contacts the Russians had with U.S. persons in the Trump campaign".

His primary worry was focused on the Russians "suborning" the latter, which means inciting them to "commit wrongful acts".   In his words:

"I know what the Russians try to do. They try to suborn individuals They try to get individuals including U.S. persons to act on their behalf either wittingly or unwittingly."

We do not have the exact plan or what the Trump bunch agreed to with their Russian counterparts, but it is possible to "reverse engineer" what transpired. This is what I call the "second level" or recruiting American voters themselves to act as a weaponized faction against Clinton. Specifically, it seems voters in the three critical states (WI, MI, PA) which tossed the election to Trump had their brains 'jacked' by sophisticated propaganda stories like "pizzagate", e.g.

As noted in a recent TIME account, ('Mocking Democracy- Inside Russia's Social Media War On America', May 29, p. 30)  "counterintelligence officials saw evidence of Russia using algorithmic techniques to target social media accounts of particular reporters".  Thereby, false stories could be seeded into media enclaves where - according to one CI official "the specific reporter might be slightly slanted to believing things".

With such a reporter's mind in the proverbial 'crapper', the mind virus would then easily be disseminated as the fake story - say Pizzagate- was maliciously spread.

But did this throw the election to Trump? It may well have. While the skinny is that the Russians alone sowed false stories, the TIME account identifies two Trump-linked outfits under probe as well: Cambridge Analytica - partly owned by Trump backer Robert Mercer, and Breitbart News, associated with Steve Bannon.   In effect, the collusion would have theoretically been between Russian fake news sources and the Trump-leaning organizations.

Evidence? Well so far it's indirect not direct. Examining the statistics for Google searches in the three states that tipped the election to Trump, Dem operatives found fake news searches (e.g. for "Pizzagate") were disproportionately higher in swing districts. These searches were not found in districts likely to vote Trump. Why would they? If indeed the purpose of the social media assault was to change brain orientations and beliefs against Hillary, it would not have been necessary to waste energy on the already converted. (E,g. Trump voters).

The Democratic operatives, as it turns out, created a package of background materials indicating that "someone had successfully altered the behavior in key voting districts in key states".

The notion that 77,000 voters' minds might have been changed in the 3 key states to toss the election to Trump is therefore not without some basis.

Most disturbing is that all that was needed for Trump to win the electoral vote race, and hence presidency, was for 77,000 brains to be jacked and their voting preferences altered.  Of course, I'm not saying other factors didn't also play a role, including voter suppression used on African Americans in WI who didn't have the "correct" ID and were not allowed to vote. Some estimates (e.g. in The New Republic) put that total as high as 300,000.

But the sadder aspect is how right thinking, intelligent American voter could remotely believe any of the codswallop such as peddled in the fake pedophilia story of Pizzagate. This means that unless Americans get much smarter and more percipient in future elections, we may see this sordid media gaming play out again.  The key threshold that must be crossed is more Americans being able to spot fake news garbage, as opposed to believing it and worse, acting on it.  To that end, readers might wish to circulate the link below to anyone they believe might be susceptible:

If it is true that Putin helped Trump win the election, it's just payback for the CIA doing the same for Yeltsin back in 1996--who then appointed Putin as his successor. That's some delicious and long overdue payback for all of the horrid meddling the CIA has done all around the world since WW2.