Solving The Mystery Of The Sudden Warming Of Uranus' Atmosphere

True color (left) and false color images of Uranus taken by Voyager 2 in 1986.

Do a back of the envelope computation of Uranus' surface (effective)  temperature and you get about T = 100 K. Investigate a more detailed model (also consistent with other gas giants, i.e. Jupiter, Saturn, Neptune) and you obtain 200 K or -73 C.  We know these planets have to be cold because they're so distant, right? I mean Uranus is at a mean distance from the Sun of 19.2 astronomical units and one of its years is equal to 84 Earth years. Its solar constant is roughly 3.8 watts per square meter compared to Earth's 1400 W/ m2.

However, in the course of the two Voyager flybys in the late 1980s, the actual measurements made of the upper atmosphere didn't conform to the model predictions. The Voyagers found temperatures much hotter than expected, by at least five times. (1,000 K  or 700C, hotter than any ovens can generate on Earth). What was going on? A greenhouse effect on this distant planet? Who (or better, what)  was producing it? In any case how explain such ridiculously high temperatures?

More baffling, though Uranus' upper atmosphere cooled from 750 K to 550 K over the past twenty years it has heated by 50 K/year since 2013. This is significant given the length of Uranus' year so that small variations in the atmospheric temperature as Uranus orbits the Sun ought to be taking place gradually.


Melin went even further, hypothesizing that since storms occur all the time on Jupiter and Saturn they could display higher upper atmosphere temperatures as well.

What about the Sun? Could it be the heating culprit? Nope. As I noted earlier the solar constant is simply too low so we know solar photons don't supply enough energy to heat their upper atmospheres to current temperatures.   What about generation of heat via hot, internal cores? While we know Jupiter and Saturn possess such cores - left over from their formation 4.5 billion years ago- Uranus' core generates little heat.  A diagram of Uranus' interior is shown below: 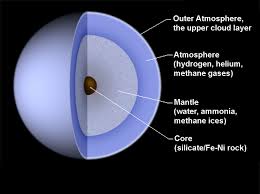 What about a greenhouse effect based on methane instead of CO2?  Not likely given hydrogen and helium are the predominant atmospheric gases and methane is primarily in the form of ice. Also, unlike Earth - where released frozen methane can trap heat from incoming solar infrared radiation-  there simply isn't enough solar heat reaching Uranus to trap. As I already showed.

A more likely suspect, as named by Melin, could be low amplitude acoustic waves. These are also known as "gravity waves" - which could be generated by huge, turbulent storms.  Think of ripples on a pond, triggered by some disturbance,  as a reasonable analogy.  We also know that such gravity waves on Earth can be generated by violent thunder storms.  Monster storms on the gas giant planets also create such "p-waves" which propagate toward higher altitudes and generate heat. This would be done via the high density -> low density transition, and generate shocks - the immediate heating agent.

Melin validated this by saying (ibid.): "the appearance of these storms in 2014 correlates well with the abrupt heating of the upper atmosphere".  Melin presented his paper on the Uranian heating mechanism at the 2015 AGU Fall Meeting and those interested can read his abstract here:

Meanwhile, planetary astronomers remain unclear how gas giant planets' upper atmospheres react with the lower.  Also, it is possible that the apparent increase in Uranus' storminess is merely an artifact arising from an observational bias.  This is the take of Leigh Fletcher, also a planetary scientist at the University of Leicester. As Prof. Fletcher puts it (ibid.):

"Only a long term campaign of Uranus' storm tracking can accurately tell us the statistics of Uranus' storms, though the 2014 storms do appear to be bigger and brighter than anything we've seen before.

This is a sober and wise observation which bids us take our time before coming to any hard and fast conclusions regarding Uranus; warming. After all, we do not want to unwittingly generate fake news or fake "discoveries".
Posted by Copernicus at 7:33 AM