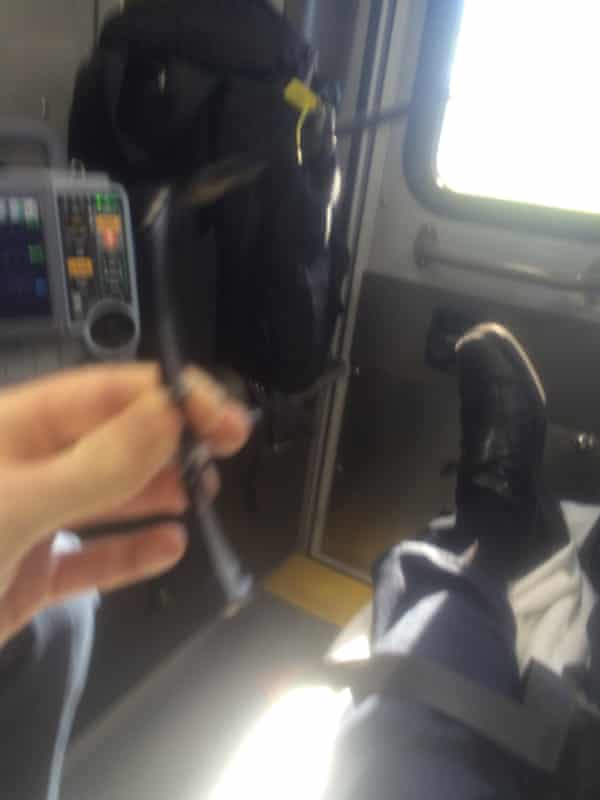 Guardian reporter Ben Jacobs shown being carted off to the ER in Montana after being body slammed by GOP gangster, Greg Gianforte.

We watched ("All In" with Chris Hayes) as the breaking news came in at 6:15 p.m. MT in total belief. "Holy shit!" Janice yelped. "We really have become a gangster state under the Repukes and Trump!"    I mean, let's face it, when you get to the stage of a politician hurling a reporter to the ground you are now talking of Nazi- style thug behavior not seen since the 1930s. As another guest on All In put it, "totally in-American".  Indeed!

Fox News reporter Alicia Alcuna, field producer Faith Mangan and photographer Keith Railey witnessed the incident, according to an account published by foxnews.com. After Jacobs asked Gianforte his question, Alcuna wrote, “Gianforte grabbed Jacobs by the neck with both hands and slammed him into the ground behind him."

“Faith, Keith and I watched in disbelief as Gianforte then began punching the man, as he moved on top the reporter and began yelling something to the effect of ‘I’m sick and tired of this!’ ... To be clear, at no point did any of us who witnessed this assault see Jacobs show any form of physical aggression toward Gianforte, who left the area after giving statements to local sheriff’s deputies.”

Jacobs subsequently reported the incident to the police. The Gallatin County sheriff’s office is investigating.

All the above puts the kibosh on the Gianforte campaign babble that it was Jacobs who had been the aggressor. Their version, e.g.:

"Jacobs entered the office without permission, aggressively shoved a microphone in Greg's face,  and began asking badgering questions.  Jacobs was asked to leave. After asking Jacobs to lower the recorder, Jacobs declined. Greg then attempted to grab the phone that was pushed in his face. Jacobs grabbed Greg’s wrist, and spun away from Greg, pushing them both to the ground. "


Is so patently full of bull shit that it rivals the Pizzagate fake news BS about Hillary running a child sex ring in the basement of a D.C. pizza parlor.  Indeed, one merely has to listen to the audio clip and the explosive violence and shouting (by Gianforte) to be able to deduce WHO the aggressor was and it damned sure wasn't Jacobs.  That Jacobs was the "poundee" as opposed to pounder is also validated by FOX News reporter Alicia Acuna who was in the room. So not only was Jacobs body slammed by the Reepo ape, but  Gianforte also  jumped onto Jacobs and punched him too.

Indeed, Gianforte's lackey's (Scanlon's ) account is manifestly contradicted not only by the violent abortive interview where one can almost visually see Jacobs getting body slammed - like Don Knotts by Hulk Hogan, but also by the Fox News reporter's account. Also, at no time during the audio recoding does one hear a word about Jacobs being asked to leave, so we see Gianforte's gangsters are exposed as fucking liars.

Jacobs, who injured his shoulder and had to go to an ER, as well as had his glasses broken, is the victim here and merits filing a law suit, for first degree assault and battery.

"He took me to the ground,” Jacobs said by phone from the back of an ambulance. “I think he wailed on me once or twice ... He got on me and I think he hit me ... This is the strangest thing that has ever happened to me in reporting on politics.”

Meanwhile, Montana's voters hopefully will be appraised of this vicious act as they go to the polls tomorrow. They need to do the right thing and send Gianforte a one time message that his sort of jackboot thug political violence will not be tolerated, not in their state and not under any circumstances.

You can hear the audio recording of the incident here:

Gianforte has been charged with misdemeanor assault and three Montana newspapers have withdrawn their endorsements.
Posted by Copernicus at 8:44 PM