Proxy Battle In France Ends With Blowout Of The "French Trump" 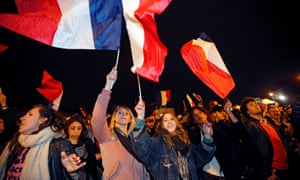 French voters celebrate Emmanuel Macron's win yesterday - and many in Europe and the U.S. breath a sigh of relief.

All of Europe and many in the U.S. held their breath yesterday to see if the far right populist surge that began with Brexit, then Trump's election in the U.S. could be stopped. Squaring off was a former centrist investment banker Emmanuel Macron, against the "French Trump" - as many French voters called Marine Le Pen.  And what might have ended in a Le Pen victory and ultimately a "Frexit", instead saw an electoral blowout with Macron winning 66 percent to 34 percent.

Not so much touted or noted was the extent to which the French runoff election had turned into a cage match battle between Trump and Barack Obama - but via proxies (Macron and Le Pen) representing Obama-style centrism and right wing Trumpism, respectively. Indeed, seeing the risk to the European Union, Obama had come right out for common sense and a video of Obama endorsing Emmanuel Macron for President was pinned to the top of Macron’s FB page. The video was vintage POTUS 44,  all intelligence and maturity.

Unlike the bombastic, toddler-esque Trump with his three-year old's vocabulary (in tweets and in person)  and perverted, Cheshire cat smirk, Obama fixed the camera with his trademark sober, sympathetic gaze stating in his coherent style:

“I’ve always been grateful for the friendship of the French people, and for the work we did together when I was President of the United States,.  I'm not planning to get involved in many elections now that I don’t have to run for office again. But the French election is very important to the future of France and the values that we care so much about.”

Obama's endorsement emphasized that the French runoff result "mattered to the entire world" which it did. This is because a Le Pen victory would have reinforced the nationalist, anti-immigrant position of the U.S. Trumpites even as Trump would have slobbered all over her win in overblown tweets.  As it was, the boy in a man's job had to eat humble pie and at least make it look like he approved of Macron's lopsided win. He doesn't and you can bet your sweet bippy on that. He probably ripped most of his orange hair out last night.

Trump himself had earlier "cavorted" with Le Pen - even inviting her to Trump Tower, see e.g.


He fully embraced her agenda,  noting the similarities in position such as her anti-Islamic, anti-immigration and closed borders stance as well as de facto keeping France for the French.  Recall also that Le Pen, leader of the National Front, was one of the first to congratulate Trump on his fake news- driven, Wikileaks -Hillary email hacked victory in November. Also,  Le Pen's nativist, nationalistic message carried echoes of Trump's anti-immigrant campaign rhetoric. Trump, in turn,  had praised Le Pen’s tough stance on immigration and borders, which many of her critics had decried as racist.

Obama's appearance three days in advance of the runoff in support of Macron should not have surprised anyone who knew anything of the two leaders.  As Emily Schultheis noted in The Atlantic last month, Obama and Macron’s campaigns shared plenty of similarities. Like Obama, Macron relied on a large and seemingly unprecedented grassroots campaign composed of thousands of volunteers across the country. Both Obama's and Macron's campaigns were centered on moving their countries in a progressive direction—Macron’s slogan being En Marche, or “Onward!,”  (named after the party he formed 3 years ago), while Obama relied on the slogans “Change We Can Believe In” and, for his reelection campaign, “Forward.”

So, in the end - even though Le Pen made a late, half-hearted effort to distance herself from Trump-  it wasn't enough. Trump or no Trump,  her extremist positions  didn't sit well with French voters who were not bamboozled by fake news or hacks (one even coming hours before election day but which Macron's campaign had laid traps for) . Given two ballots in  hand-  one with Le Pen's name on it, one with Emmanuel Macron's -  French voter's by nearly 2 to 1 dumped the former into dust bins and cast the latter.  Today's post-mortem news (CBS Early Show) was that millions of Le Pen ballots were left in trash cans in the voter precincts. Today, with those tossed ballots hopefully disclosing her in history's dust bin, the world is breathing easier.

But some pundits are asserting it was merely a Le Pen defeat not one for far Right populism. Indeed, despite Macron's blowout, Le Pen scored a historic high for the French far Right. Even after a  campaign that ended with a calamitous performance in the final TV debate, she was projected to have taken almost 11m votes, double that of her father, Jean-Marie Le Pen, when he reached the presidential run-off in 2002.  Recall, old man Jean-Marie was the one who said the Holocaust was a "small detail of history".

In addition, the anti-immigration, anti-EU National Front's supporters have asserted that the party now has a central place as an opposition force in France. They might, but that may depend on future elections. As it was the French runoff election turnout was the lowest in more than 40 years. Almost one-third of voters chose neither Macron nor Le Pen, with 12 million abstaining and 4.2 million spoiling ballot papers. In many ways it mirrored our own 2016 election when many voters decried "two horrible choices",

But maybe what we have to start asking ourselves is why we so often end up with these "horrible" choices. Is it our electoral process? Or is it the very choices we make at each stage of extended campaigns, including primaries? Would making voting easier help, such as using mail ballots like we do here in Colorado? At the very least that should enable higher voter turnout, though that is the one thing the U.S. far Right doesn't want, so convinced are they that "voter fraud" is the primary evil - never mind it is actually voter suppression.

For now the world of the sane breathes easier, but the vast fake news realm of the insane, angry and unsettled remains and no one can write it off for the long term.  This was but one battle in a long bruising war that isn't settled yet, not by a long shot.

"The fact that racist nationalist Le Pen could summon more than a third of the French vote is cause for worry about the future. Xenophobia toward Muslims has played a part. More responsible are widening inequality and mounting job insecurity – coupled with a growing sense that the political-economy is rigged in favor or the privileged and out of touch with average working people.

The French haven’t suffered the same degree of economic stresses as have Americans in recent decades – France’s social safety net is still relatively intact – which may explain why they didn’t elect Le Pen while we elected Trump. But France, like most modern political economic systems, is heading in America’s direction under the guise of business “flexibility” and austerity economics."
Posted by Copernicus at 7:33 AM